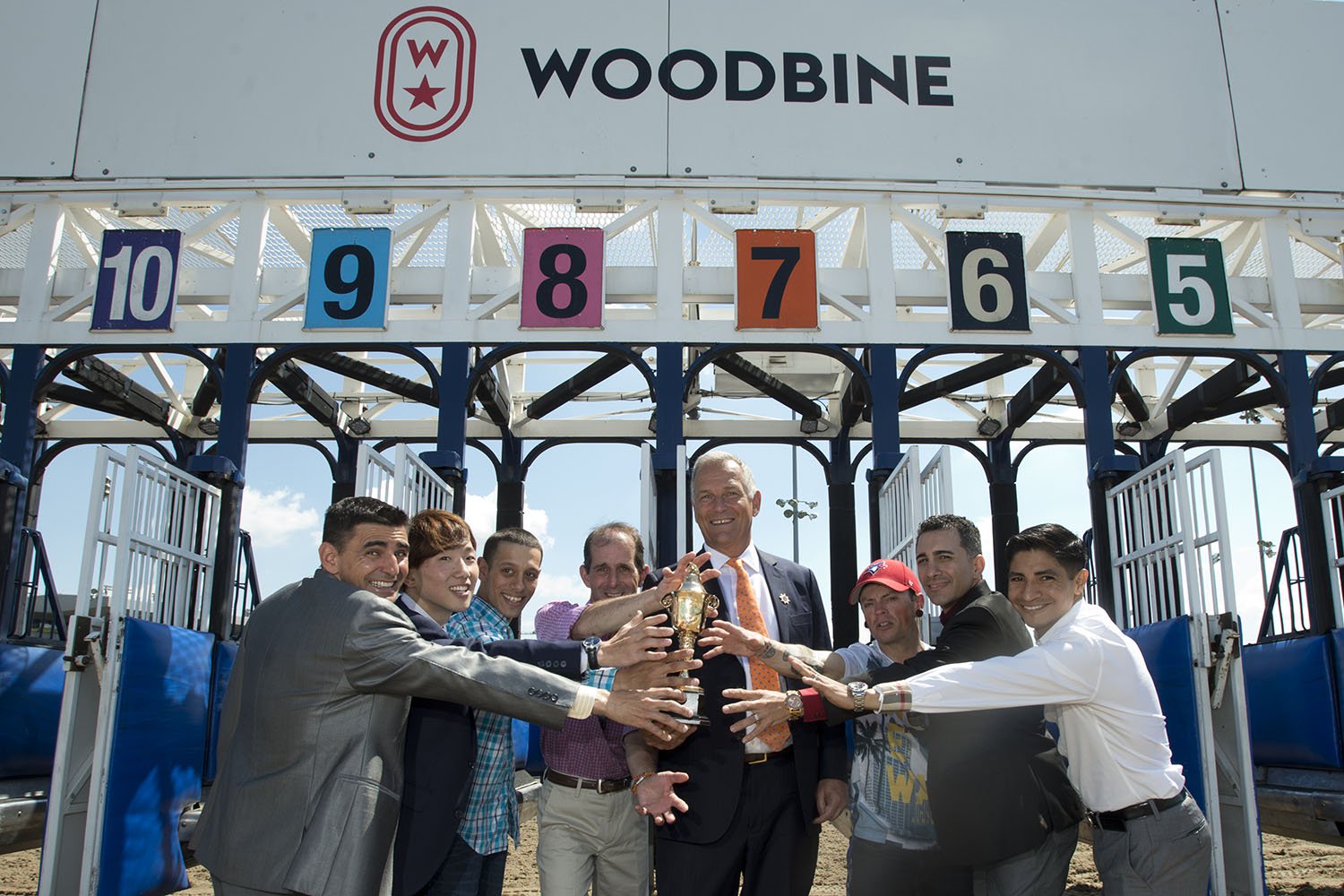 TORONTO, June 26, 2019—Avie’s Flatter, Canada’s champion two-year-old male, looms as the horse to beat when he faces 13 other Queen’s Plate hopefuls in the $1 million showpiece over 1 1/4 miles on Woodbine’s Tapeta surface this Saturday.

The 160th edition of the Queen’s Plate, North America’s oldest annually run race, is the first leg of the OLG Canadian Triple Crown, a tri-surface series for Canadian-bred three-year-olds which will offer a new $500,000 bonus for a sweep.

Wando, owned and bred by the late Gustav Schickedanz, was the last horse to accomplish the feat while becoming the seventh to pull off the unique triple in 2003. The $400,000 Prince of Wales, run at 1 3/16 miles on the dirt at Fort Erie on July 23, is the middle leg and the $400,000 Breeders’ Stakes, at 1 1/2 miles on the turf back here at Woodbine on August 17, concludes the challenge.

Avie’s Flatter, a homebred who races for owner Ivan Dalos and is trained by Josie Carroll, wrapped up his first campaign with back-to-back wins over fellow Canadian-breds in the Cup and Saucer at 1 1/16 miles on turf and the Coronation Futurity over 1 1/8 miles on the main track.  Norcliffe was the last horse to win both the Coronation Futurity and the Queen’s Plate, completing that double in 1976.

The Queen’s Plate will be the first local appearance this year for Avie’s Flatter, whose previous sophomore outings were on turf and yielded a win in the Grade 3, 1 1/16-mile Transylvania at Keeneland and a close sixth-place finish in the Grade 2, 1 1/16-mile American Turf at Churchill Downs.

Javier Castellano, aboard for those two outings, will retain the mount as he comes in from his Belmont base.

Carroll, who won the Queen’s Plate with Inglorious in 2011 and with Edenwold in 2006, will be looking to give Dalos his first Queen’s Plate score after the owner/breeder fielded runners-up Amis Gizmo in 2016 and Ami’s Holiday in 2014.

The double-draw format was in effect at Wednesday’s post position draw, with the order of selection first established and the connections then choosing their post positions.

Avie’s Flatter, the 5-2 favourite in Woodbine oddsmaker Ernie Perri’s morning line, actually had no choice at all as he was the last to select and defaulted to the outside post position.

“The outside post is probably not ideal but it’s a long way to the first turn and it’s a mile and a quarter race,” said Carroll. “So, I’m not going to have too many concerns about being outside.” 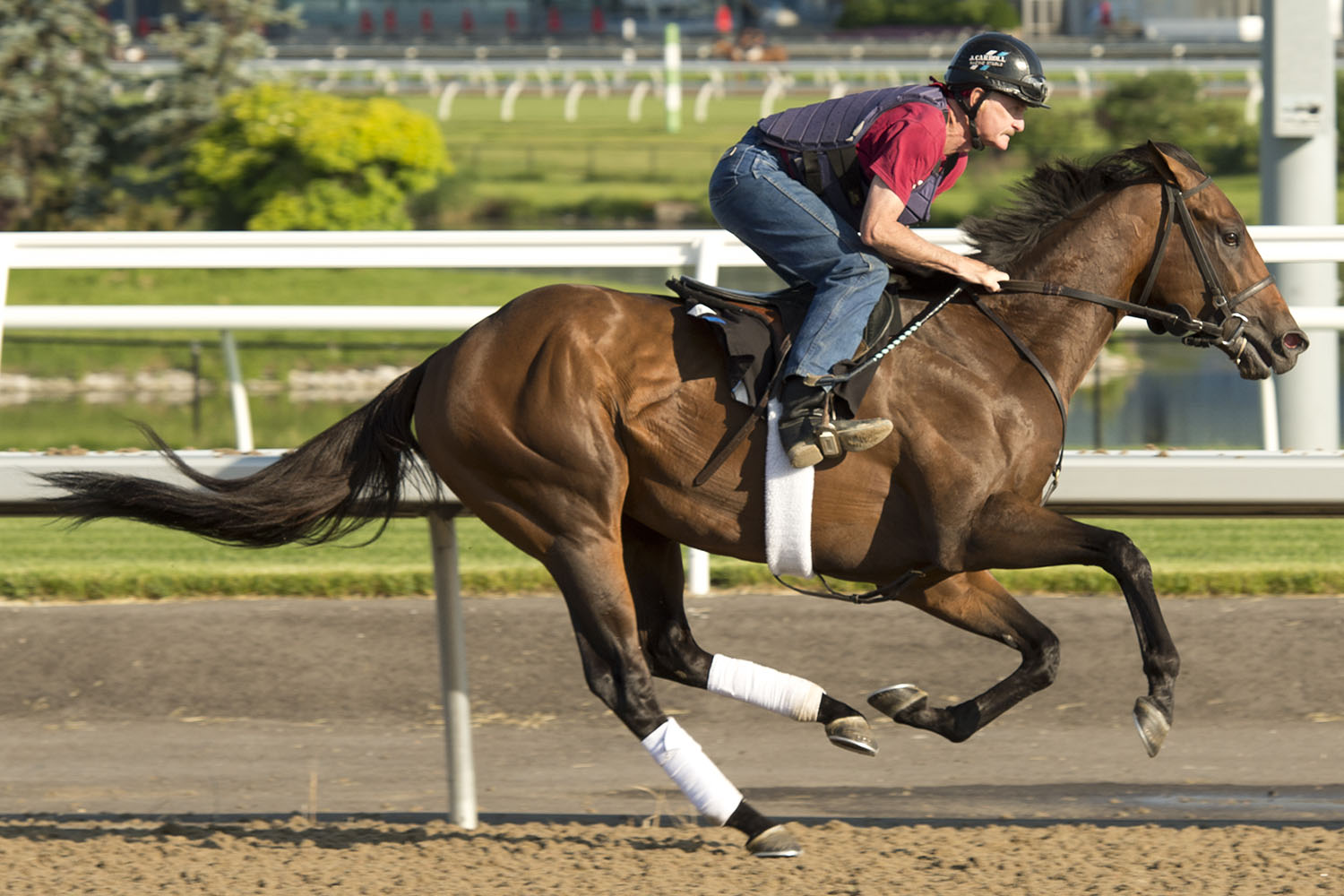 Avie’s Flatter is the 5-2 morning line favourite for the 160th running of the Queen’s Plate, first jewel of the OLG Canadian Triple Crown, which will be contested this Saturday, June 29 at Woodbine Racetrack. (Michael Burns Photo)

Trainer Mark Casse will be looking for his second straight Queen’s Plate and third overall after clicking with the fillies Wonder Gadot last year and Lexie Lou in 2014. Both raced for owner Gary Barber, who owns Skywire in partnership with Lou Tucci, co-owner of 2013 Queen’s Plate upsetter Midnight Aria.

Skywire came into sharp Queen’s Plate focus when winning this spring’s 1 1/16-mile Wando Stakes and followed up with a good second behind American-bred Global Access in the Grade 3 Marine. Woodbine’s leading rider Eurico Rosa da Silva was aboard for those two outings and has won Queen’s Plates with Big Red Mike (2010) and Eye of the Leopard (2009).

Desert Ride, the heroine of the June 8 Woodbine Oaks presented by Budweiser, will be looking to follow in the hoofprints of Wonder Gadot and Holy Helena to become the third straight filly to win the Queen’s Plate.

Owned and bred by Sam-Son Farm, Desert Ride is based in Kentucky with trainer Neil Howard and was making both her local and stakes debut in the Woodbine Oaks. Desert Ride scored by a neck there under rider Steve Bahen, who guided T J’s Lucky Moon to his Queen’s Plate $166 record payoff in the 2002 edition.

Sam-Son has owned and bred five previous Queen’s Plate winners, the most recent being Eye of the Leopard. Their earlier successes included the superfilly Dance Smartly in 1991; her daughter Dancethruthedawn and son Scatter the Gold, full siblings who won in 2000 and 2001; and Regal Intention in 1988.

Desert Ride will carry 121 pounds, getting five pounds from her male rivals.

Selecting 10th in the order of the draw, Desert Ride’s connections had the choice of post one or any of the four outside posts and opted for the inside.

“Neil would rather be inside, so might as well just take our way inside and work our way around,” said Bahen.

Adding intrigue to this year’s Queen’s Plate will be a pair of invaders, with One Bad Boy on the grounds for trainer Richard Baltas and Tone Broke due in Thursday from his Churchill Downs base for Steve Asmussen.

One Bad Boy will be racing beyond a mile for the first time after finishing second over that distance in the off-the-turf Alcatraz on the Tapeta surface at Golden Gate. Flavien Prat picks up the mount.

Tone Broke finished second last time out in the Sir Barton, a 1 1/16-mile race on Pimlico’s Preakness Day undercard, and that performance was flattered when winner King for A Day returned to defeat disqualified Kentucky Derby first-place finisher Maximum Security in the Pegasus Stakes at Monmouth Park. The colt will be making his first start on a synthetic surface.

Luis Contreras, winner of the Queen’s Plate with Holy Helena and Inglorious, picks up the mount on Tone Broke.

The last horse to win the Queen’s Plate while making his Woodbine debut was Wild Desert, in 2005.

Pay for Peace, who upset the 1 1/8-mile Plate Trial on June 8, and Federal Law, the runner-up there while 1-3/4 lengths back as the favourite, will renew their rivalry on Saturday.

Rachel Halden trains Pay for Peace, who was winning his first stakes race in the Plate Trial. Rafael Hernandez, successful with Shaman Ghost in his first Queen’s Plate run in 2015, has the mount.

Federal Law is conditioned by Mark Casse and will be ridden by Jamie Spencer, a go-to rider for Qatar Racing Limited, who will be making the Transatlantic trip. Spencer has won five Grade 1 stakes at Woodbine, all on turf, including Trade Storm in the 2014 Ricoh Woodbine Mile.

Bred in Ontario by Jim Lawson, CEO and president of Woodbine Entertainment, Federal Law was beaten a half-length by Avie’s Flatter in the Coronation Futurity and won the seven-furlong Queenston Stakes this April. The last Plate Trial winner to repeat in the Queen’s Plate was Big Red Mike in 2010, after Eye of the Leopard pulled off that double the previous year and Not Bourbon in 2008.

He’s a Macho Man, a second Queen’s Plate entrant from the Josie Carroll barn, is the least experienced horse in the field with just three starts. His only two outings here yielded smart come-from-behind victories over 1 1/16 miles, however, and he is not to be discounted in his stakes debut. Patrick Husbands, who has won Queen’s Plates with Lexie Lou and Wando, will ride He’s a Macho Man for the first time.

He’s a Macho Man’s interests had fifth pick and his owners announced their choice as post position eight.

“I think we ended up exactly where we wanted to be,” said Carroll.

Trainer Mike De Paulo and owner Rob Marzilli will be looking to become the first to capture the Queen’s Plate with a maiden since Scatter the Gold, with Moon Swings and Rising Star both seeking their initial victories.

Rising Star finished third and Moon Swings fourth in the Plate Trial. Their respective riders, Justin Stein and Jesse Campbell, have Queen’s Plate wins under their belts with Stein’s success coming with Strait of Dover in 2012 and Campbell’s with Midnight Aria the following year.

Lucas n’ Lori and Suitedconnected both enter the Queen’s Plate off fringe finishes in a 1 1/16-mile turf race and will be making their stakes debuts.

Canadian champion apprentice jockey Kazushi Kimura will be contesting his first Queen’s Plate aboard Lucas n’ Lori, who like Jammin Still is trained by Kevin Attard.

Gary Boulanger, winner of the Queen’s Plate with Dancethruthedawn, gets the call on Suitedconnected, the second career Queen’s Plate entrant for veteran conditioner Earl Barnett.

First race post time for Saturday’s action-packed program of Thoroughbred racing is 12 noon with the featured Queen’s Plate scheduled as Race 10 with a 5:36 p.m. post time. Live television coverage of the first jewel of the OLG Canadian Triple Crown from Woodbine Racetrack will air from 4:30 p.m. to 6 p.m. ET on TSN and CTV.

The two-day Queen’s Plate Racing Festival, which includes live concerts by The Washboard Union and High Valley, along with renowned attractions, VIP parties and fabulous food, kicks off on Friday with first race post time set for 3:30 p.m. For more information or to purchase tickets, visit www.queensplate.com.

Here is a look at the field for the 160th running of the Queen’s Plate in post position order: