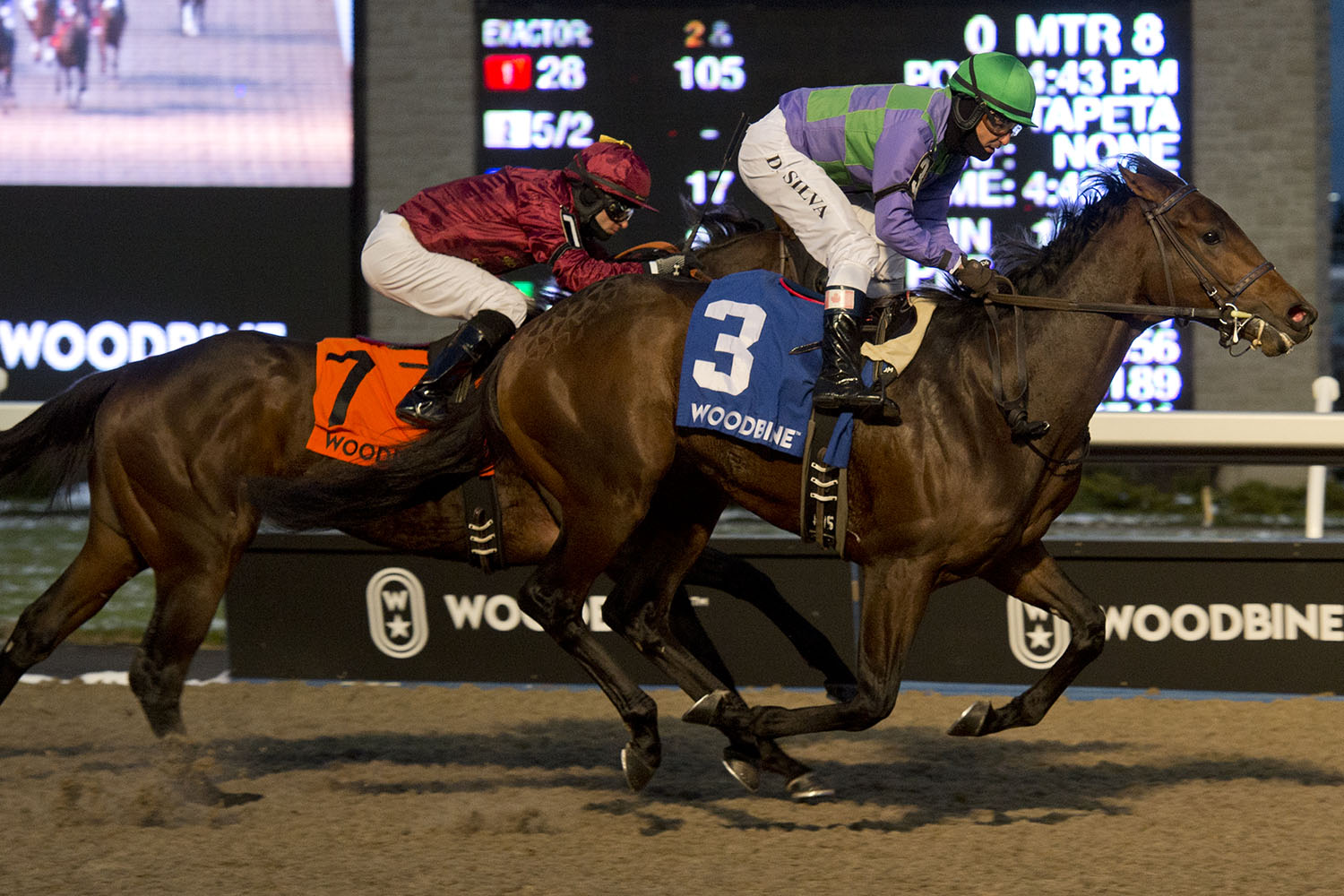 TORONTO, March 8, 2019 – Avie’s Flatter leads a list of 84 three-year-old Thoroughbreds nominated to the Canadian Triple Crown, which opens with the $1 million Queen’s Plate on Saturday, June 29 at Woodbine Racetrack.

Avie’s Flatter has been assessed as the early 3-1 favourite in this year’s edition of the Queen’s Plate Winterbook. Compiled by Ron Gierkink and Alex Campbell of the Daily Racing Form, the hypothetical Winterbook offers an early look at the 84 three-year-olds, including 11 fillies, that are nominated to the 2019 Canadian Triple Crown.

In addition, a total of 59 fillies have been nominated to the 64th running of the $500,000 Woodbine Oaks Presented by Budweiser, the first leg of the Triple Tiara, which is scheduled for Saturday, June 8.

Owned and bred by Ivan Dalos’ Tall Oaks Farm, Avie’s Flatter went three-for-four and earned more than $250,000 during a juvenile campaign that included back-to-back victories in the Cup and Saucer Stakes over 1-1/16 miles of turf and the Coronation Futurity over 1-1/8 miles on the Tapeta. After breaking his maiden in his August 12 debut, the Josie Carroll trainee took on Grade 1 foes finishing a credible fourth despite a troubled start in the Summer Stakes.

Avie’s Flatter is a 2018 Sovereign Award finalist in the Champion Two-Year-Old Male category. The Flatter colt is out of the Sovereign Award-nominated broodmare Avie’s Empire and he is a half-brother to last year’s Wonder Where Stakes winner Avie’s Mineshaft.

“He’s doing very well. He had a little bit of break after his last race and has been training in Florida,” reported trainer Josie Carroll.  “We had anticipated running next weekend in the Tampa Bay Derby, but he wasn’t quite ready for that, so we’ll possibly get a race in south before he comes home.”

With multiple highlights from his debut season, Carroll was most impressed by the colt’s versatility winning on both the turf and the synthetic surfaces.

“I think he’s a pretty special horse,” said Carroll, who has trained 795 winners in her career including past Queen’s Plate champions Edenwold (2006) and Inglorious (2011).

“I think Mr. Dalos has been a very patient man with his horses and I think that’s key to developing a horse and getting the best chance to win a race like this.”

Following Avie’s Flatter among the top three picks are Coronation Futurity runner-up Federal Law (4-1) and the undefeated Skywire (6-1), both trained by Mark Casse. The filly Desert Ride (8-1) and Awesome Wok N Roll (10-1) round out the top five selections with Chiefswood Stable’s homebred filly Bold Script, winner of the Princess Elizabeth Stakes for trainer Stuart Simon, assessed as the 12-1 sixth choice.

Last year, Gary Barber’s super filly Wonder Gadot, runner-up in the Woodbine Oaks, beat the boys in the $1 million Queen’s Plate as the Winterbook third choice and popular pick at post time for Casse before going on to win the Prince of Wales Stakes. Her stablemate Telekinesis, the early season favourite, finished fifth in the Queen’s Plate.

The first jewel of the Triple Crown is the highlight of the two-day Queen’s Plate Racing Festival, which runs from Friday, June 28 to Saturday, June 29. The fashion-forward festival will feature world-class horse racing, live entertainment and delicious dining experiences. For the latest Queen’s Plate news and event details, visit QueensPlate.com.  Tickets can be purchased at Ticketmaster.ca for Canada’s premier horse racing festival.

Here is a look at the complete Queen’s Plate Winterbook odds:

A Song for Artie

Leave It to Kitten