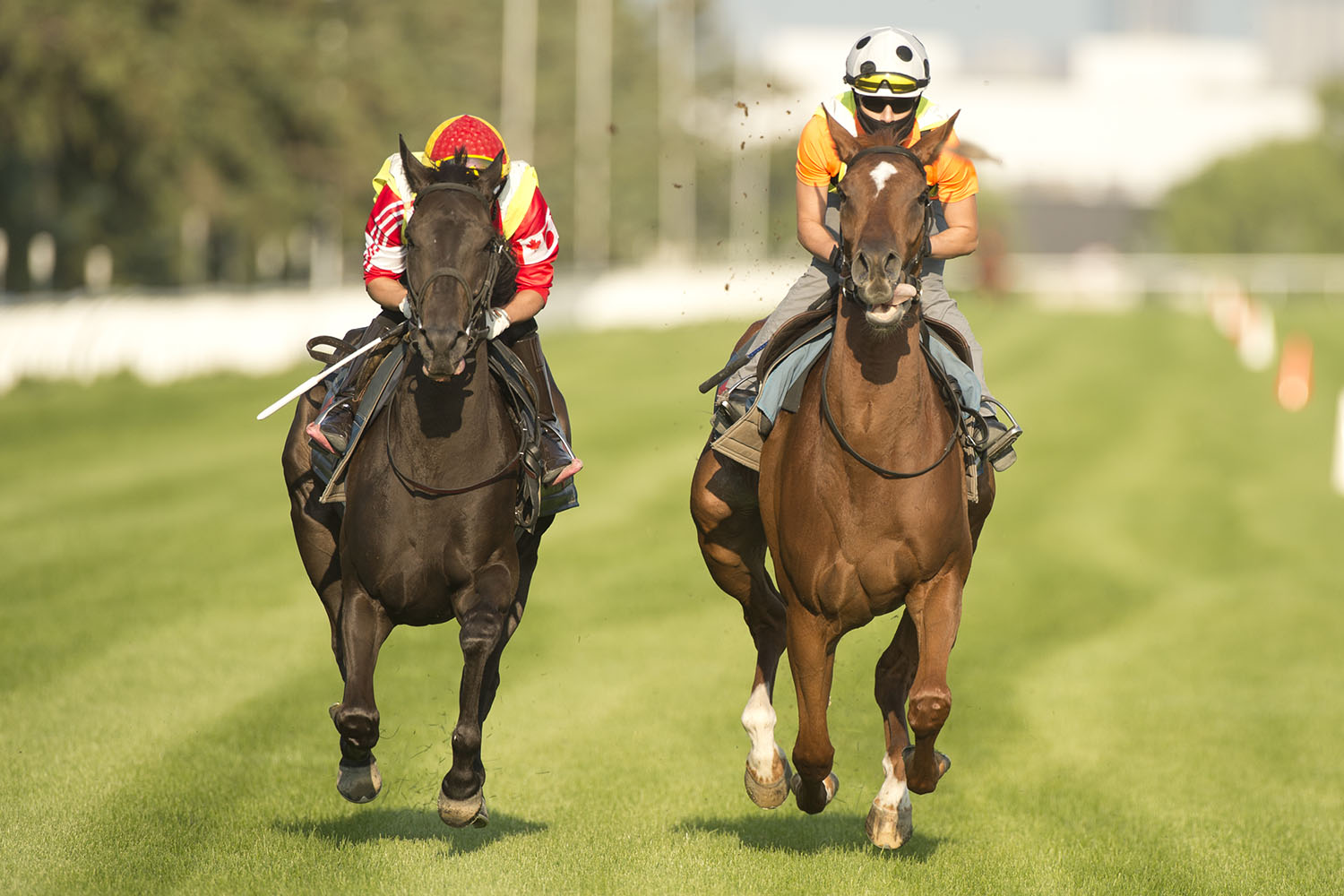 TORONTO, September 10, 2020 – Art of Almost and Elizabeth Way, both trained by Roger Attfield, will take on eight rivals, including multiple Grade 1 champion Cambier Parc, in Saturday’s $250,000 Canadian Stakes presented by the Japan Racing Association (Grade 2), one of four added-money features that complement the 161st running of The Queen’s Plate.

A dual hall of fame inductee, Attfield will look for his fourth Canadian crown, having won the 1984 edition with Dundrum Dancer, the 1994 running with Alywow, and the 2010 renewal with Miss Keller.

He’ll have a pair of chances to add to his Canadian haul in the 1 1/8-mile stakes race for fillies & mares, three-year-olds and up, contested over the E.P. Taylor Turf Course.

A four-year-old daughter of Dansili (GB), Art of Almost has crafted a 3-3-4 mark from 15 starts for the ownership group of Frederick Seitz, Jon Kelly, Danny Ward, and Dr. Ted Folkerth.

The multiple graded stakes placed miss finished third in a pair of stakes races in 2019, the Dance Smartly (G2), and Pucker Up (G3).

Art of Almost heads into the Canadian off back-to-back fourth-place stakes outings, including her most recent engagement, the Dance Smartly on August 15.

What she lacks in size, offered Attfield, is made up for in effort.

The chestnut, owned by John McCormack, took all the spoils in The Very One (G3) on February 29 at Gulfstream – her second start of the season – and won the Nassau Stakes (G2) on June 27 at Woodbine.

She arrives at the Canadian off a third in the Dance Smartly.

“It wasn’t her race at all,” said Attfield, of the most recent performance. “She didn’t really go into it as nicely as she had in all her other races. She didn’t really run her race. She was running off the bridle with her head up. But at least she was third, anyway. She’s coming into this one much better than she was the last one, for sure.”

Elizabeth Way (inside) and Art of Almost (outside) at Woodbine in early August. (Michael Burns Photo)

Three-time stakes winner Amalfi Coast, who closed out her three-year-old season with a victory in the Bessarabian Stakes (G2), will look to notch her first win in 2020. The daughter of Tapizar comes into the Canadian off a third-place effort in the Seaway (G3) on August 16.

The Terra Racing homebred, trained by Kevin Attard (who won the past two editions with Starship Jubilee), is 4-2-2 from 11 lifetime starts.

Trained by Barbara Minshall, the four-year-old daughter of Munnings was second in this year’s Nassau (G2), third in the Trillium (G3) and most recently, fourth in the Seaway (G3).

Bold Script, a four-year-old daughter of Speightstown, is 3-6-4 from 16 outings for owner and breeder Chiefswood Stables.

The Ontario-bred grey, trained by Stuart Simon, has contested four graded events, including a pair of third-place efforts in the 2018 Natalma (G1) and 2019 Selene (G3). She was the runner-up in the 2019 Bison City.

Cambier Parc, who last raced nearly a year ago, has won three of her past four starts – including back-to-back Grade 1 triumphs – for OXO Equine and trainer Chad Brown.

The four-year-old daughter of Medaglia d’Oro took the Del Mar Oaks last August and followed it up with a victory in the Queen Elizabeth II Challenge Cup in October.

“I appreciate Larry Best giving me the opportunity with this horse,” Brown said after the Queen Elizabeth win. “She’s a really well-bred, great-looking horse that anyone would love to have. I’m lucky to have her.”

Bred in Kentucky by Bonne Chance Farm, she is out of 2007 Canadian Horse of the Year and Triple Tiara winner Sealy Hill, who has also produced Canadian champion sprinter and Grade 2 winner Hillaby and Grade 3 winners Belle Hill and Gale Force.

Ivan Dalos’ homebred Court Return goes for the natural hat trick after a romp on July 2 at Woodbine, followed by an Eternal Search Stakes triumph on August 22.

Trained by Josie Carroll, the four-year-old daughter of Court Vision was fourth in last year’s Wonder Where Stakes at Woodbine.

The four-year-old daughter of Candy Ride is 3-0-1 from nine career starts. She arrives at the Canadian off a rallying score on August 1 at Woodbine, a 1 ½-length win at 1 1/16 miles over the Toronto oval’s Inner Turf.

Bred and owned by Craig Singer, Runway Dreamer rallied from second-last at the quarter-mile mark to win an 11-horse 1 1/16-mile Inner Turf race on August 22.

Trained by Josie Carroll, the three-year-old daughter of Candy Ride has contested six of her career races at Woodbine, with the other two coming at Gulfstream.

This will be her third stakes appearance.

Classic Stamp (2004, 2005) and reigning Canadian Horse of the Year Starship Jubilee (2018, 2019) are the only two-time winners of the Canadian. Sam-Son Farm leads all owners with four wins, and Canadian Horse Racing Hall of Fame inductee Robin Platts tops all riders with five victories.

The Canadian Stakes, which is the third leg of Woodbine’s Ladies of the Lawn bonus series, precedes the $1 million Queen’s Plate, as the ninth of 13 races. The $250,000 Bison City Stakes, second jewel in the Canadian Triple Tiara series, goes as race eight. The $100,000 King Corrie (race two) and $100,00 Ruling Angel (race 12) overnight stakes are also on tap Saturday. First race post time is 12:30 p.m.

Afleet Katherine is coming off a solid second-place finish in the 1 1/8-mile Woodbine Oaks presented by Budweiser, and the respective 1-3 finishers there, Curlin’s Voyage and Merveilleux, are contenders for Saturday’s Queen’s Plate.

But the connections of the lightly-raced Afleet Katherine, who could have been supplemented to the Plate at a cost of $25,000, have chosen a more conservative path and the Terra Racing Stable homebred looms an odds-on choice for Saturday’s $250,000 Bison City.

The Bison City, a 1 1/16-mile fixture which follows the Woodbine Oaks as the second leg of the Triple Tiara for Canadian-bred three-year-old fillies, attracted a field of eight and will go as the eighth of 13 races on the program.

“We discussed it (running in the Queen’s Plate) a little bit, obviously,” said trainer Kevin Attard, who conditions Afleet Katherine for Terra triumvirate of Dom Romeo; his son, Frank; and his grandson, Mike Romeo. “From the beginning, it kind of seemed the road was going to be the Bison City.

“Frank Romeo thought she had done a lot to this point, and was obviously concerned about her long-term future, and didn’t want to do too much too soon with her. You have to respect that a lot, I think.”

Afleet Katherine was highly regarded at two but did not make it to the races and, after wintering in Florida, finally debuted with a victory at almost 30-1 in a seven-furlong maiden turf race here July 5.

With an eye toward the Woodbine Oaks, Afleet Katherine swung back over the same distance and surface three weeks later and knocked out her first allowance condition while defeating older rivals.

Despite making her Tapeta debut and travelling around two turns for the first time, Afleet Katherine was a surprising 4.40-1 third choice in the Woodbine Oaks and ran a remarkable race while beaten less than two lengths with stablemate Merveilleux a half-length in arrears.

“I thought she ran brilliant,” said Attard. “She was really the only horse that kind of survived that hectic early pace. She was trying right to the end, lacking a lot of seasoning, obviously, compared to everybody else in the field.”

Justin Stein, her career pilot to date, retains the mount. He is currently tied atop the jockey standings with 74 wins this season (next to Rafael Hernandez). 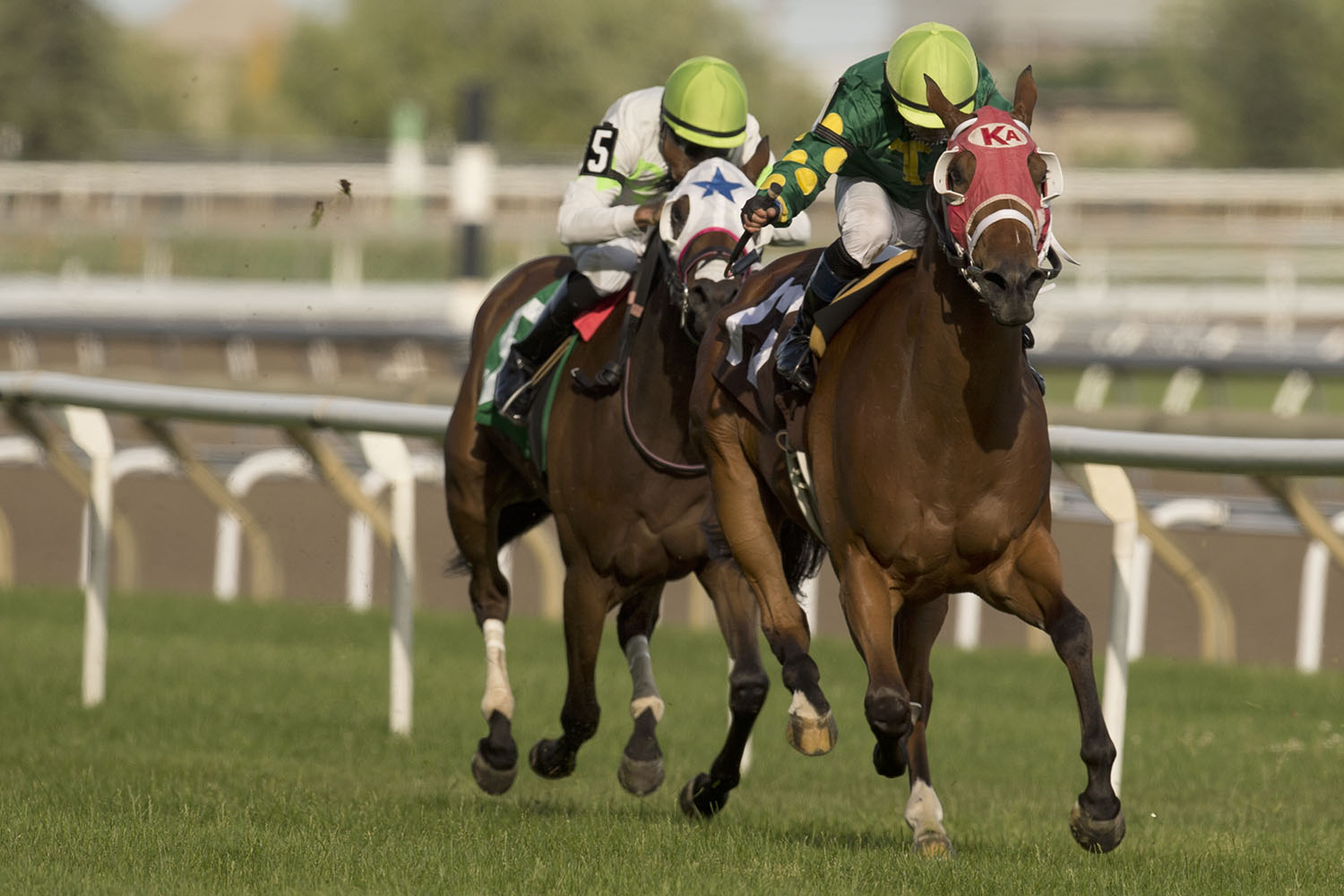 The only stakes winners in the field are Gun Society and Infinite Patience.

Gun Society, who closed out her first campaign with back-to-back wins including the South Ocean for Ontario-sired fillies at the 1 1/16-mile distance, appears to have rounded back into form for her fourth start of this season.

Trained, owned and bred by the venerable Roger Attfield, the daughter of Society’s Chairman trailed while making her sophomore bow here in the seven-furlong Fury and has faced older rivals on the turf in  two subsequent 1 1/16-mile starts, including a last-out second in the restricted Eternal Search.

“She had a setback, and she wasn’t really ready for the Fury, but I ran her anyway for the fitness edge, sort of thing,” said Attfield. “She wasn’t doing well at all there, or for the next race actually. She’s just started to come around. Her last race was quite creditable, I thought. So, we’ll give her a shot.”

Gun Society raced with blinkers for the first time in the Eternal Search and was beaten 1 ¼ lengths by the four-year-old Court Return.

“I think the blinkers made her more focused,” said Attfield. “I think she surprised the jock as much as myself. She took off early; she probably went too soon, really. We were experimenting a little, but it was good.”

Infinite Patience, the British Columbia-bred who was the pride of Hastings Racecourse last year while winning four stakes and five provincial year-end awards including Horse of the Year, will be looking to rebound from a faltering seventh-place finish in the Woodbine Oaks.

That was her second start locally, following a solid third-place finish behind Curlin’s Voyage and Justleavitalone in the Fury, and her first for locally-based trainer Lorne Richards.

“We were disappointed,” said Richards, who is conditioning Infinite Patience for Edmonton Oilers forward Ryan Nugent-Hopkins and co-owner/breeder Bill DeCoursey.

“She was real good going into the Oaks, but she just wouldn’t settle. We’ve tried a few different things and hopefully we can get her to relax a little bit more this time.

“She’s a nice little filly, for sure.”

Patrick Husbands, aboard when the Sungold filly breezed five furlongs in 1:02.60 here September 1, has the mount for the Bison City.

Also returning from the Woodbine Oaks will be Mizzen Beau and Justleaveitalone, the respective fourth and fifth-place finishers.

Justleaveitalone had followed up her surprising performance in the Fury with her maiden win at 1 1/8 miles.

Mizzen Beau, fifth when making her local bow in the Fury, will be looking to give trainer Norm Casse his first local win.

The Bison City also lured two invaders in Truth Hurts, who has been training at Belmont with Chad Summers, and Pseudonym, recently shipped to Saratoga after beginning her career at Gulfstream this spring for Saffie Joseph Jr. Both fillies will be racing on a synthetic surface for the first time.

Ballrooms of Mars, second behind Justleaveitalone in the August 2 maiden race, rounds out the field in which all starters carry 121 pounds.

The $250,000 Wonder Where Stakes, the final leg of the Triple Tiara, is scheduled for 1 ¼ miles on the E.P Taylor turf course here October 25.

Undefeated filly Boardroom and graded stakes placed Avie’s Samurai headline the field of seven three-year-old fillies set to contest the $100,000 Ruling Angel Stakes over 6-1/2 furlongs on the Tapeta this Saturday at Woodbine. The pair is trained by Hall of Famer Josie Carroll, who sends out a trio of contenders in the afternoon’s featured Queen’s Plate, including star sophomore filly Curlin’s Voyage.

Boardroom, a Kentucky-bred daughter of Commissioner, is perfect in two career starts at Woodbine, winning her races by a combined margin of 9-1/4 lengths in rein to Luis Contreras for L N K Foxwoods.

Patrick Husbands picks up the mount on the Ivan Dalos’ homebred Avie’s Samurai, a three-time winner who missed by just a head in the Grade 3 Ontario Colleen Stakes last time out (August 29) when making her debut on the E.P. Taylor turf course at a mile. Prior to that outing, the First Samurai filly won over the Ruling Angel course and distance and was fourth in the seven-furlong Fury, finishing 2-1/2 lengths behind the aforementioned Queen’s Plate-bound Curlin’s Voyage.

Woodbine newcomer Francatelli is the 8-5 favourite in the King Corrie, a five-furlong sprint on the Inner Turf course. The Kentucky-bred City Zip gelding has won his last two of four starts including a powerful 9-1/2 length tally in a 5-1/2-furlong allowance race mid-August at Laurel Park. Justin Stein gets the call aboard the Cathal Lynch trainee, who is co-owned by Maribeth Sandford.