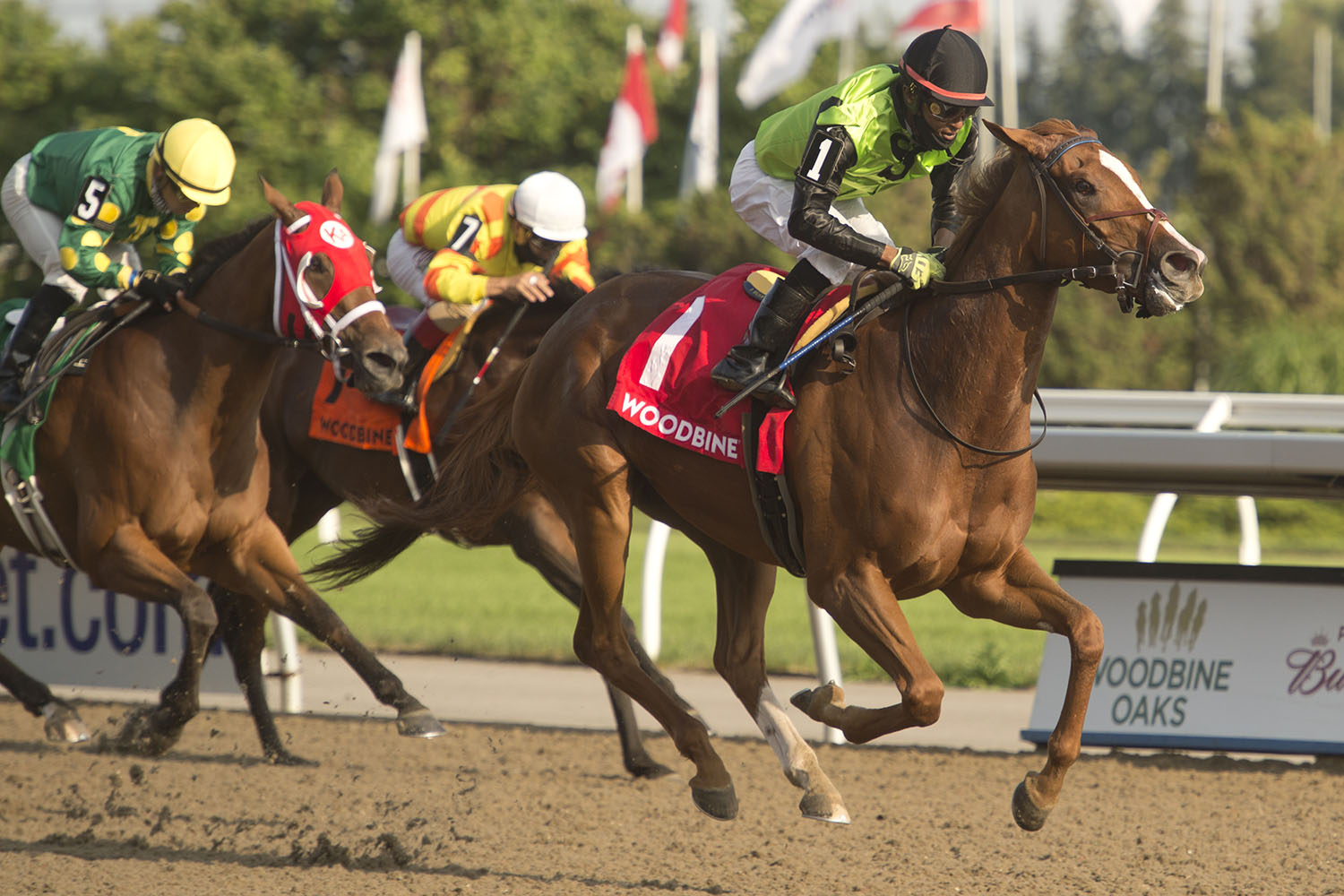 TORONTO, August 15, 2020 – Curlin’s Voyage, patiently handled by Patrick Husbands, put away her rivals in early stretch en route to victory in the 65th running of the $500,000 Woodbine Oaks presented by Budweiser, Saturday at Woodbine.

Trained by Josie Carroll and owned by Hill ‘n’ Dale Equine Holdings Inc., and Windsor Boys Racing, Curlin’s Voyage made a strong statement in the first leg of the Triple Tiara for Canadian-bred three-year-old fillies, and in doing so, perhaps put herself in line for a spot in the Queen’s Plate starting gate.

It was Infinite Patience, breaking from the outside post 10, who took the lead soon after the start, crossing over to lead her nine rivals into the first turn.

The Vancouver-based stakes star, with Emma-Jayne Wilson in the irons, was 1 ½-lengths on top of 67-1 longshot Bayou Belle after a quarter-mile in :23:15, and one-length in front at the half clocked in :46.79. Curlin’s Voyage, travelling well along the rail, remained covered up in eighth.

As the field rounded the final turn, Husbands and Curlin’s Voyage were in high gear. The duo was in front in a flash and held a two-length advantage at Robert Geller’s stretch call. 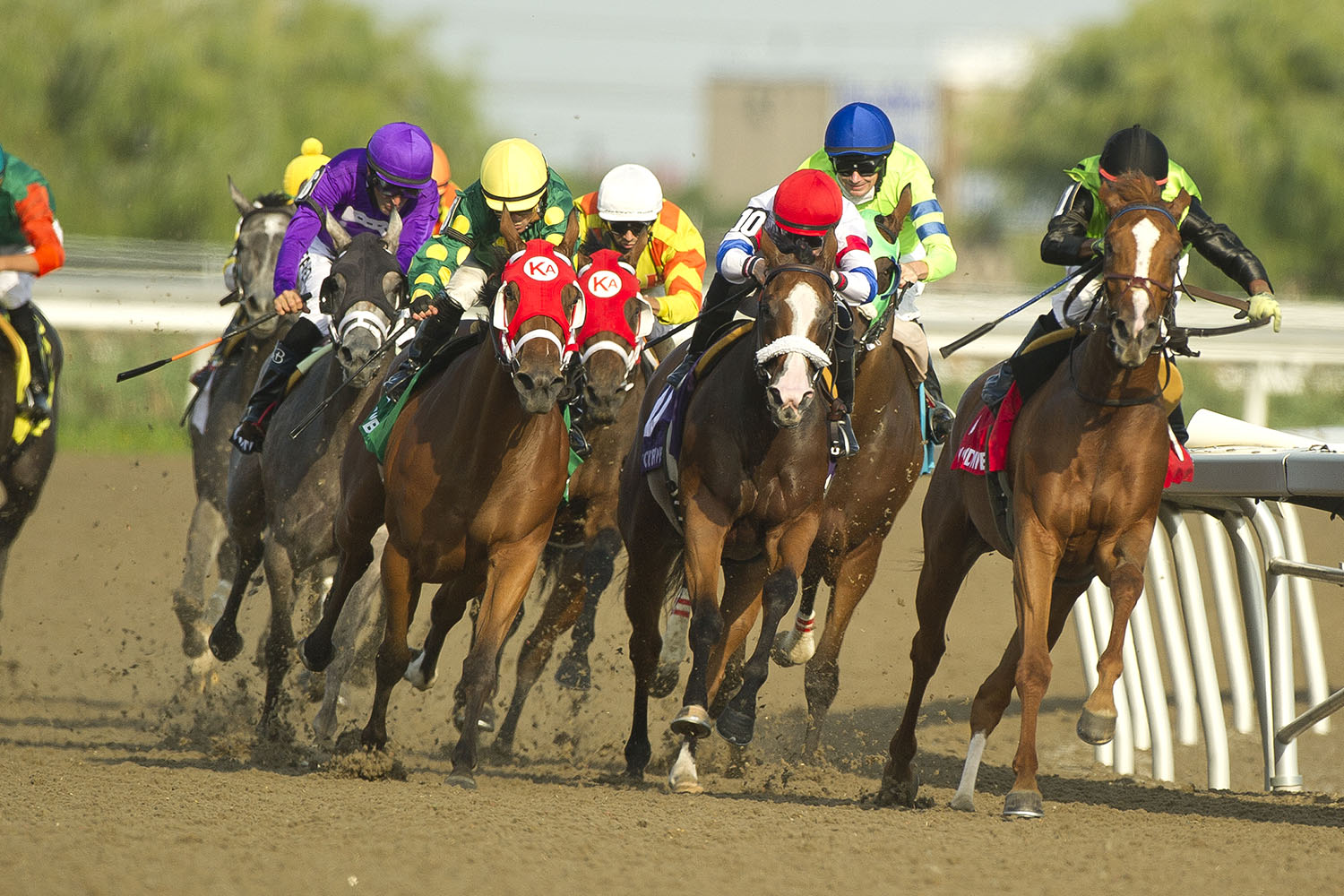 Down the lane, the veteran rider and daughter of Curlin found themselves in complete control, going on to secure a 1 ¾-length score.

“The first quarter was pretty quick, so that singled them out,” said Husbands, who won his fourth Oaks. “As you know, I have to ride [jockey, Rafael, aboard Merveilleux] Hernandez from the wire, he was on me…and so, in the first turn and in the second turn he was on me and so I told myself, ‘I’m on the best horse,’ so when I reached the five-eighths pole, I was looking for any holes. The first hole that opened up, I was clear of that one and then the second hole opened up by the three-eighths pole, and then at the quarter pole the other one opened up and it was all sailing from there.”

“She’s a very special filly; a very, very special filly,” praised Carroll. “I think we knew what we had from the start when we were very bold and put her against the boys the first time out in a stake. It’s not something you do lightly; you have to think one’s special. I had a few concerns this year with the way the stakes schedule played out. I knew I wasn’t going to get a two-turn race in her and it gave me some concern but I trained her fairly hard into this race and she just thrived on it. Good horses thrive on training.” 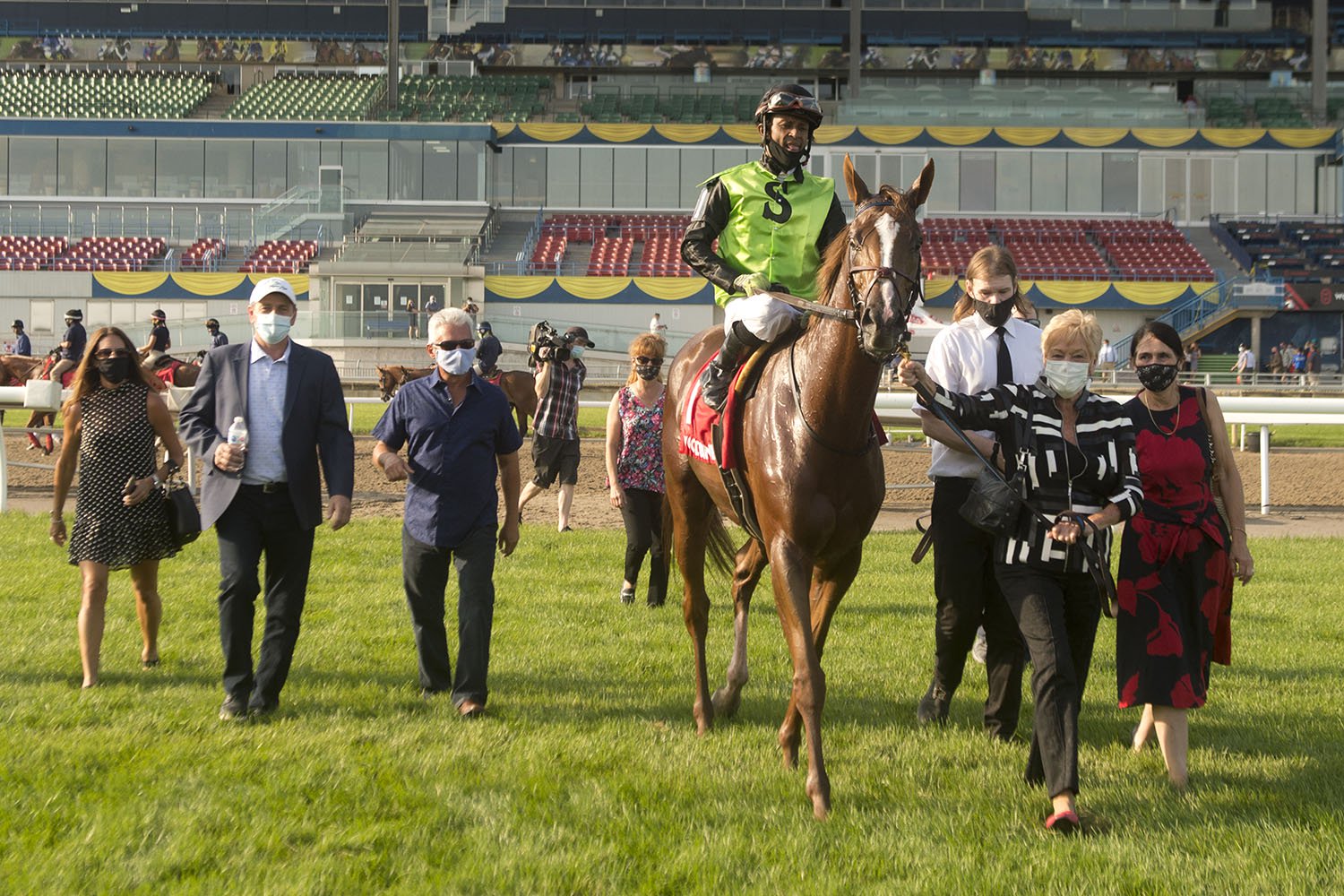 Curlin’s Voyage heads to the winner’s circle with her connections after winning the $500,000 Woodbine Oaks presented by Budweiser on Saturday, Aug. 15 at Woodbine Racetrack. (Michael Burns Photo)

A 2019 Canadian Horse Racing Hall of Fame inductee, Carroll is no stranger to Woodbine Oaks or Queen’s Plate success.

In 2011, the decorated conditioner campaigned Inglorious to the Oaks-Plate double. Five years earlier, she became the first female trainer to win the Plate when Edenwold captured Canada’s most famous horse race.

The decision whether to run Curlin’s Voyage, now 5-2-1 from nine starts, in the $1 million Queen’s Plate (September 12) won’t be made yet.

“You know, with Inglorious I think I had everybody frustrated because I wouldn’t make up my mind until the week before the Plate. I’m very much about my individual horses and she’s going to tell us.”

The Woodbine Oaks has served as a Queen’s Plate stepping-stone for fillies. Recent Oaks-Plate champions include Holy Helena (2017), Lexie Lou (2014), Inglorious (2011) and Dancethruthedawn (2001). In 2018, Oaks runner-up Wonder Gadot went on to win the Queen’s Plate.