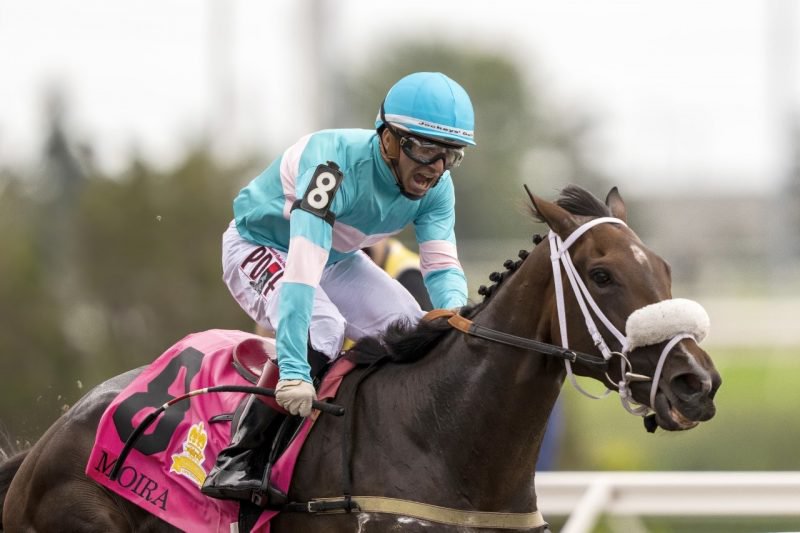 TORONTO, August 21, 2022 – Moira was once again masterful in victory, the daughter of Ghostzapper-Devine Aida trouncing her 10 rivals to the tune of a seven-length triumph in the 163rd running of the $1 million Queen’s Plate, Sunday at Woodbine.

If there was any question as to what type of encore the Ontario-bred filly would come up with after a brilliant 10 ¾ lengths score in the Woodbine Oaks Presented by Budweiser three weeks ago, Moira had a most emphatic answer, punctuated by a primetime performance in front of an aprreciative crowd.

Owned by X-Men Racing LLC, Madaket Stables LLC and SF Racing LLC and trained by Kevin Attard, the bay, under Rafael Hernandez, was at the top of her game, posting a track and Plate record time of 2:01.48.

Multiple stakes winner The Minkster broke sharply and took the lead with Ironstone and Sir for Sure picking up the pursuit as the field moved in front of the grandstand for the first time. Moira, tucked in ninth, was running comfortably through the opening quarter timed in :23.75.

The Minkster, who won last year’s Coronation Futurity and this year’s Queenston, maintained his 1 1/2 -length lead over fellow multiple stakes winner Ironstone, with Sir for Sure and Causin’ Mayhem positioned in third and fourth, respectively, at the half in :47.58.

As The Minskter and Ironstone began to battle it out on the front end, Hernandez roused Moira around the turn for home and the fleet-footed filly responded with a devastating late turn of foot, breezing by her foes, and effortlessly gliding to the lead.

Once striking front, it was game over, as Moira widened her advantage with ease, converting a three-length lead at the stretch call into a seven-length tour de force, producing one of the most impressive Plate performances ever. Hall of Dreams was second, with Sir for Sure, another Mark Casse trainee, in third. Ironstone was fourth.

“It’s unbelievable,” said Hernandez, who teamed with Shaman Ghost to win the 2015 Plate. “You know, with good horses, you can get out of trouble so quick and always get a second, or third gear like her. Sat off, save ground, and when you want to get out of the horses in front of you, you just move out, and she gave me everything. She gave me another gear, and when we turned for home, she was unbelievable. She’s something else. She is so special.”

“This win is for her [Hernandez’s late grandmother], and all my family enjoyed the moment,” he continued. “It’s unbelievable for me, because this is home. This [Canada] is home now and to be the first one for Kevin, it makes it so special.”

For Attard, it was an emotional and treasured moment, one he had dreamt about since he launched his training career.

In 2007, he finished second with Alezzandro. Today, 15 years later, he was able to go one better.

“I’ve been down this path with a few horses that I thought I’ve had chances. Obviously, I was really excited today with this filly. But it’s just such a hard race to win and you don’t know. But you know, I’m here now and I got this trophy in my hand I worked really hard. I have a great staff. And it’s just a great moment and I’m so happy right now.” 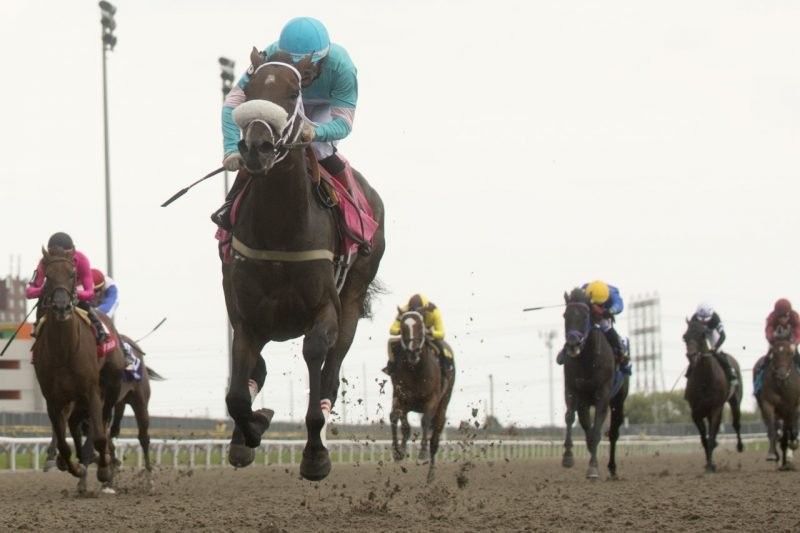 As is his Plate champion.

“She’s such a nice filly. She’s an amazing filly. We’re just fortunate to be here with a good group of guys.”

The $400,000 Prince of Wales Stakes, a 1 3/16-mile race over Fort Erie’s dirt oval on September 13, is the next race in the tri-surface OLG Canadian Triple Crown series, which concludes with the $400,000 Breeders’ Stakes at 1 ½-miles over Woodbine’s E.P. Taylor Turf Course on October 2.