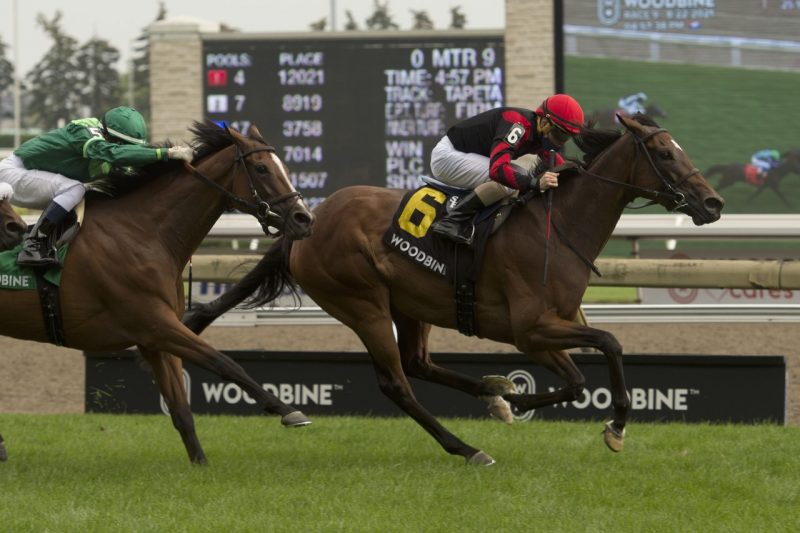 TORONTO, August 22, 2021 – The 162nd running of The Queen’s Plate was the crown jewel for a tremendous 13-race card on Sunday afternoon at Woodbine Racetrack. The stellar undercard included the Grade 1 Highlander, Grade 2 Dance Smartly and Grade 3 Ontario Colleen.

TORONTO, August 22, 2021 – Our Flash Drive, under Patrick Husbands, was full of run down the lane en route to an impressive win in the Grade 3 $150,000 Ontario Colleen Stakes for 3-year-old fillies, Sunday at Woodbine.

One of two Mark Casse trainees in the seven-horse field, Our Flash Drive broke well and was positioned second, as Sweet Souper Sweet, also owned by Live Oak Plantation, grabbed the lead in the one-mile turf tilt, and took her rivals through an opening quarter-mile in :24.42.

Sweet Souper Sweet continued to lead the proceedings after a half in :48.35, as Husbands bided his time with Our Flash Drive. Speightstown Shirl and Perseverancia followed in third and fourth, respectively, while 8-5 choice Misspell was called upon by Irad Ortiz Jr. as the field rounded the turn for home.

Husbands had Our Flash Drive rolling for the long drive home, and the daughter of Ghostzapper responded in kind, separating herself from her rivals with ease, going in to a 1 ½-length triumph in a time of 1:34.76 over firm going under humid conditions.

Seasons rallied to finish second, 1 ¼-lengths ahead of Speightstown Shirl. Perseverancia was fourth. 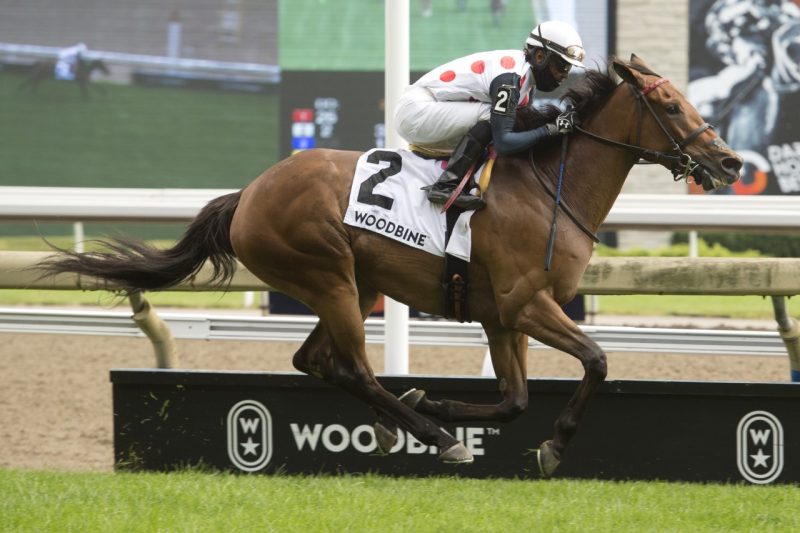 “I breezed her on Sunday (August 15)… when I got back to the barn, my head was bigger than Woodbine,” said Husbands. “I said ‘Mark, this is a Breeders’ Cup horse.’ She just loved it [the turf].

“She’s a relaxed horse,” continued Husbands. “We had a couple of horses we worked – I was behind them about 10, 15 lengths and she was just wanting the green light. I said, ‘No baby, no baby, no baby’ and that was on Sunday. She’s the type of filly that, what you want to do, she’ll let you do. But she’s pretty savvy racing and you can decide what to do with her.”

It was fifth start and third win for the Live Oak homebred, who came into the Ontario Colleen off a an impressive victory in the Grade 3 Selene Stakes on July 10 at Woodbine.

Sent postward as the 3-1 second choice, Our Flash Drive returned $6.90 to win.

Salty as Can Be, also trained by Casse, was scratched.

Alnaseem, sent to the front early after beginning from post six in the field of seven fillies and mares, led through fractions of :25.98, :50.32 and 1:14.07, with Mutamakina just one length back.

“I saw the four-horse had some good speed,” said Davis, who was riding his first stakes winner at Woodbine. ”I broke well [and] was able to get a good stalking position right there.

“She did switch her leads down the backside a few times. She just needed a little bit of guidance. I had to get into her early. I was a little worried about that. Once she straightened up, she saw where she needed to go and she ran very strongly to the wire.”

Mutamakina reached the mile in 1:37.13 and led by two lengths with a furlong to run before finishing in 2:01.26 over a course rated firm.

Etoile, the 6-5 favourite for trainer Chad Brown and leading North American race-winning rider Irad Ortiz Jr., saved ground in fifth place early and launched a bid around the final turn but could not reach the winner.

Merveilleux, based locally with conditioner Kevin Attard, finished well to be third, just a neck behind Etoile.

Court Return, beaten just a neck as the runner-up in last year’s E.P. Taylor, Stakes, trailed the field early and finished well to be fourth, another half-length back.

Rounding out the order of finish were Blame Debbie, the 4-1 third choice, Alnaseem and Afleet Katherine.

A 5-year-old bred in England by Wigham Stud, Mutamakina is by Nathaniel out of the Danehill mare Joshua’s Princess.

Beginning her career in France, Mutamakina won twice and placed twice in Group 2 company before joining Clement in the fall of 2020. The Dance Smartly was her second Grade 3 win on this side of the pond, following the Long Island at Aqueduct last fall in her only previous partnership with Davis.

“I’m just happy to be back aboard her,” said Davis. “It’s just nice. She’s progressing well. She’s definitely a hard trier – you just got to know how to ride her. She always gives a good effort and Clemente had her ready today.”

The Dance Smartly was the first leg of this year’s Ladies of the Lawn, in support of ReThink Breast Cancer. The series continues with the Canadian Stakes on September 18 and concludes with the E.P. Taylor Stakes October 17. Each race will be contested over the E.P. Taylor Turf Course.

The owner of the horse who has accumulated the most points in the series will receive a $50,000 bonus, with the owners of the second and third-place horses receiving $15,000 and $10,000, respectively.

TORONTO, August 22, 2021 – Silent Poet, showing a new dimension after disappointing front-running tries in his first two starts this year, rallied from just off the pace and held off an onrushing Admiralty Pier to capture Sunday’s Grade 1 $395,500 Highlander Stakes by a diminishing half-length with Justin Stein aboard.

Caravel, the 2-5 choice, while seeking her fourth straight victory in what was hoped to be a prelude to the Breeders’ Cup Turf Sprint, finished third in the field of eight for the six-furlong turf race on the E.P. Taylor Turf Course.

“Justin and I have been talking about it right up until this race,” said Gonzalez, “and he said ‘You know, Nick, we drew two inside post positions his first two starts.’ “I break, ‘Poet’ breaks well, and I’ve got these guys on the outside of me chirping, chirping, chirping, and ‘Poet’ wouldn’t relax…he used himself a lot more than he would of in the first eighth of the race. And he backed up both times.” 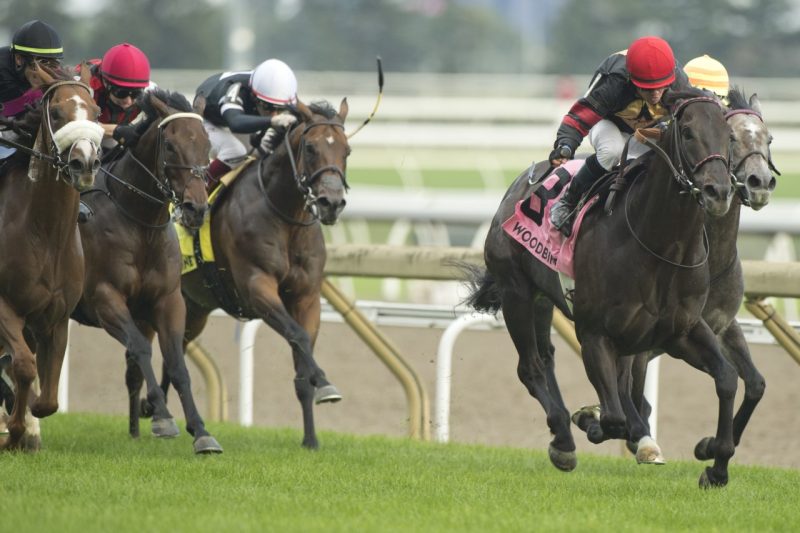 Silent Poet drew the outside post for the Highlander, facilitating the change in tactics.

“When the overnight came out and we had the eight-hole, Justin came by in the morning and said, ‘Nick, I think we’re going to be able to get a nice trip today.’ Everything worked out,” said Gonzalez.

Caravel, with Queen’s Plate-winning rider Irad Ortiz Jr. in the irons, assumed command early and clicked off an opening quarter in :22.35 en route to a half mile in :45.16.

Silent Poet, who had stalked from third and moved to within a half-length of Caravel with a quarter-mile to run, had collared the choice and led by a half-length with a furlong to run before hanging on for the half-length win in 1:07.98 on a course rated firm.

Admiralty Pier, last at the quarter pole, finished strongly on the far outside to nail down second money, 1 ¼-lengths ahead of Caravel.

City Boy finished another three-quarters of a length back in fourth with Honey Won’t, Chuck Willis, Old Chestnut, and Turned Aside rounding out the order of finish.

Silent Poet, a 6-year-old Adena Springs homebred by Silent Name out of the Ghostzapper mare Cara Bella, was winning for the 11th time in 22 career outings, all at Woodbine. Those successes include Grade 2 scores in the 2019 Play the King and the 2020 Connaught Cup and Nearctic, all on the turf.

In other action, 79-1 Mambointheforest ($161.10 to win) and jockey Sahin Civaci took the first leg – 1 3/8-miles on the inner course – of the Woodbine Turf Endurance Series for trainer Ron Sadler and owner Phillip Lanning.

The Turf Endurance Series continues with a 1 ½-mile trek over the inner turf on September 12, and a 1 ¾-mile marathon on the E.P. Taylor Turf Course on October 3.