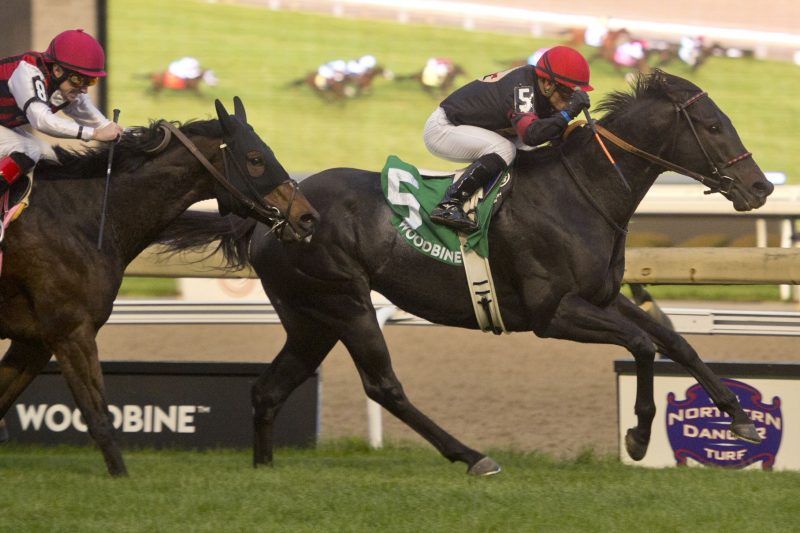 Owned by Eclipse Thoroughbred Partners, Michael Cloonan and Timothy Thornton, the well-traveled bay has assembled a 4-1-3 mark from 13 career starts.

Bred by Tim Thornton and Tony Holmes, Blame Debbie won her debut at Delaware Park on August 29, 2019, finishing second in her next start at Keeneland, prior to a third in the Grade 2 Demoiselle at Aqueduct to close out her rookie campaign.

Last year, she went 2-0-2 from eight starts, the back-to-back victories coming at Keeneland, including her first stakes win, the Grade 3 Rood and Riddle Dowager on October 18.

After a victory in the Searching Stakes this June at Pimlico to launch her 2021 campaign, Blame Debbie was fifth in her most recent start, Grade 3 Robert G. Dick Memorial Stakes.

“She ran well first time back at Pimlico, then she was a little disappointing last time at Delaware,” offered Motion. “Maybe the first race took something out of her.”

Motion thinks the Kentucky-bred will fare well running over the Toronto oval grass.

“She’s training well, and I think she’ll like the turf course up there.”

The race is named after the Sam-Son Farm superstar who went undefeated in 1991 while taking the Canadian Triple Crown, and becoming the first horse bred in Canada to win a Breeders’ Cup race (G1 Distaff, 1991). She is a member of both the Canadian and American Racing Halls of Fame.

Sam-Son Farm has three wins – tops among all owners – in the race that was inaugurated in 1986 (Bessarabian won the first edition).

The race is also the first event in Woodbine’s Ladies of the Lawn Series, in support of ReThink Breast Cancer. Next up is the $250,000 Canadian Stakes (G2) on Saturday, September 18, culminating with the $600,000 E.P. Taylor Stakes (G1) on Sunday, October 17. At the conclusion of the points-based series, the winning connections will receive a $50,000 bonus. The inaugural winner of the 2019 Ladies of the Lawn Series was Starship Jubilee, Canada’s reigning Horse of the Year.

TORONTO, August 20, 2021 – Trainer Mark Casse, a four-time winner of the Ontario Colleen Stakes, will be launching a three-pronged attack on Sunday’s renewal with Our Flash Drive, I Get It and Salty As Can Be heading postward in the one-mile turf race for 3-year-old fillies.

The Ontario Colleen, which offers Grade 3 status and a purse of $150,000, attracted eight entrants.

Our Flash Drive, a Live Oak Plantation homebred, is the only graded stakes winner in the Ontario Colleen lineup, having annexed the Grade 3 Selene over 1 1/16 miles of Tapeta last time out. The runner-up there, Munnyfor Ro, came back to take the Woodbine Oaks Presented by Budweiser and is a leading contender for Sunday’s Queen’s Plate.

“She’s done everything right this year,” said Casse, who had also watched Our Flash Drive win her maiden in authoritative fashion here at seven furlongs in her first appearance this year, but will be racing the Florida-bred on grass for the first time.

“We’ve breezed her a couple of times on the turf; she gets over the turf really well. She’ll be extremely tough, I think.” 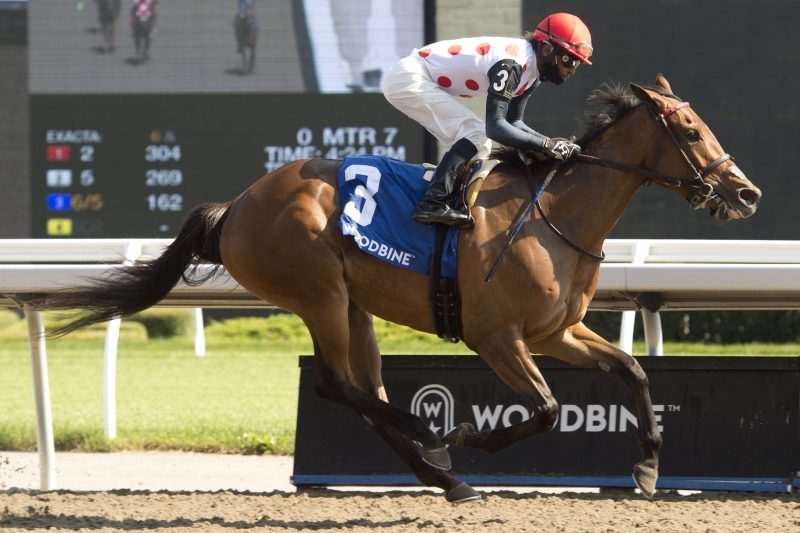 I Get It was purchased privately for owner Gary Barber prior to winning the listed Sanibel Island Stakes over one mile of firm turf at Gulfstream on March 27.

In her only subsequent outing, the Maryland-bred was well-beaten In Belmont’s Grade 3 Wonder Again over 1 1/8 miles of “good” going.

“I probably shouldn’t have ran her,” said Casse, recently inducted into the Hall of Fame at Saratoga to match his Canadian honours. “She wasn’t a happy horse at the time. We’ve just kind of given her a break; she’s doing much better now. I think she should run well.”

Salty As Can Be, owned by Gary Barber and Baccari Racing Stable, is a half-sister to Salty, who was a Grade 1 stakes winner for the same connections.

“She’s a beautiful filly,” said Casse, who has seen the Kentucky-bred sandwich two wins around a disappointing stakes try. “She had to have throat surgery after her poor performance at Churchill.”

Salty As Can Be, who had debuted victoriously at Churchill Downs, returned to win a six-furlong Tapeta sprint at Woodbine. The Ontario Colleen will be her first try on grass.

“She ran really well there,” said Casse. “She’s breezed well on the turf. She’s a bit of a guess… I think she’s good enough, but we’ll just see. This is not an easy race.”

Chad Brown, who captured the 2019 edition of the Ontario Colleen with Seek and Destroy, will be looking to duplicate that feat with Misspell, who was supplemented at a cost of $3,000 including the $1,500 entry fee.

Seasons, third in the Grade 1 Natalma over one mile of turf here last September, adds to the depth of a field which also includes stakes winner Sweet Souper Sweet, third last time out in the Selene, plus Speightstown Shirl and Perseverancia, both maiden winners on the turf at the current meeting.

The most famous alumnus of the race is the Casse trainee Got Stormy, who captured the 2018 renewal and recently notched her second win in Saratoga’s Grade 1 Bernard Baruch, defeating males in that one-mile turf race.

TORONTO, August 20, 2021 – Caravel, winner of three straight including Saratoga’s Grade 3 Caress at 5 ½-furlongs on the turf last time out, will be cruising into Woodbine on Queen’s Plate day seeking a grand slam in Sunday’s Grade 1 Highlander Stakes.

The Highlander, a six-furlong turf race, offers a purse of $350,000 and attracted a field of eight.

Caravel, a four-year-old filly, will be facing males for the first time and making her first start for trainer Graham Motion. Celebrity chef Bobby Flay purchased a majority interest in Caravel following her impressive score two starts back in Monmouth’s Goodwood Stakes at five furlongs on the turf.

Breeder/owner/trainer Elizabeth Merryman retains an interest in Caravel, who is Pennsylvania’s reigning Horse of the Year and has fashioned a record of 7-0-2, including five stakes scores, from nine starts. Merryman is based at Fair Hill in Maryland, as is Motion.

“I’ve tried not to change too much, since I’ve had her,” said Motion. “I kept her at Saratoga, we kind of kept her on the same schedule she would have at Fair Hill with Lizzie.”

The Highlander is the next marker for Caravel on the path which her connections hope will lead to the Breeders’ Cup Turf Sprint, which will be run over five furlongs at Del Mar on November 6.

“This is kind of the race we’d planned on, if she ran well at Saratoga,” said Motion. “The six furlongs is a really good distance for her.”

Irad Ortiz Jr., who piloted Caravel for the first time in the Caress, retains the mount.

Looking to hold the shipper at bay will be locally-based Silent Poet and City Boy, who were the 1-2 finishers in last year’s Grade 2 Nearctic Handicap over six furlongs of the E.P. Taylor Turf Course.

Silent Poet, a homebred who is owned by Stronach Stable and trained by Nick Gonzalez, also has victories in another pair of seven-furlong Grade 2 turf stakes, the 2019 Play the King and the 2020 Connaught Cup, but has yet to find his best form in two starts this season.

City Boy, conditioned by Mike Keogh for The Estate of Gustav Schickedanz, had become a stakes winner in the 2019 running of the Nearctic. The City Boy gelding will be making his second appearance of this season after opening up with a second-place finish under allowance terms.

“He came out of his first start really well,” said Keogh. “He ran well enough, and I think he needed the race. He missed a bit of time going into it. He always has little foot issues.”

Rounding out the field will be Admiralty Pier, who has kept top company throughout his eclectic career, and Honey Won’t, who was supplemented at a cost of $7,000, including the $3,500 entry fee.

The Highlander has been run over its current distance and surface since 2004 when Soaring Free, who went on to be Canada’s Horse of the Year, captured his first of two consecutive renewals. The race was not run last year on a COVID-19-impacted stakes schedule.

The Turf Endurance Series also gets out of the gates on August 22. The series is made up of three races, two of which are on the inner turf. The opening leg, at a distance of 1 3/8 miles, is slated for Sunday, followed by a 1 ½-mile trek September 12, and a 1 ¾-mile marathon on the main course October 3.