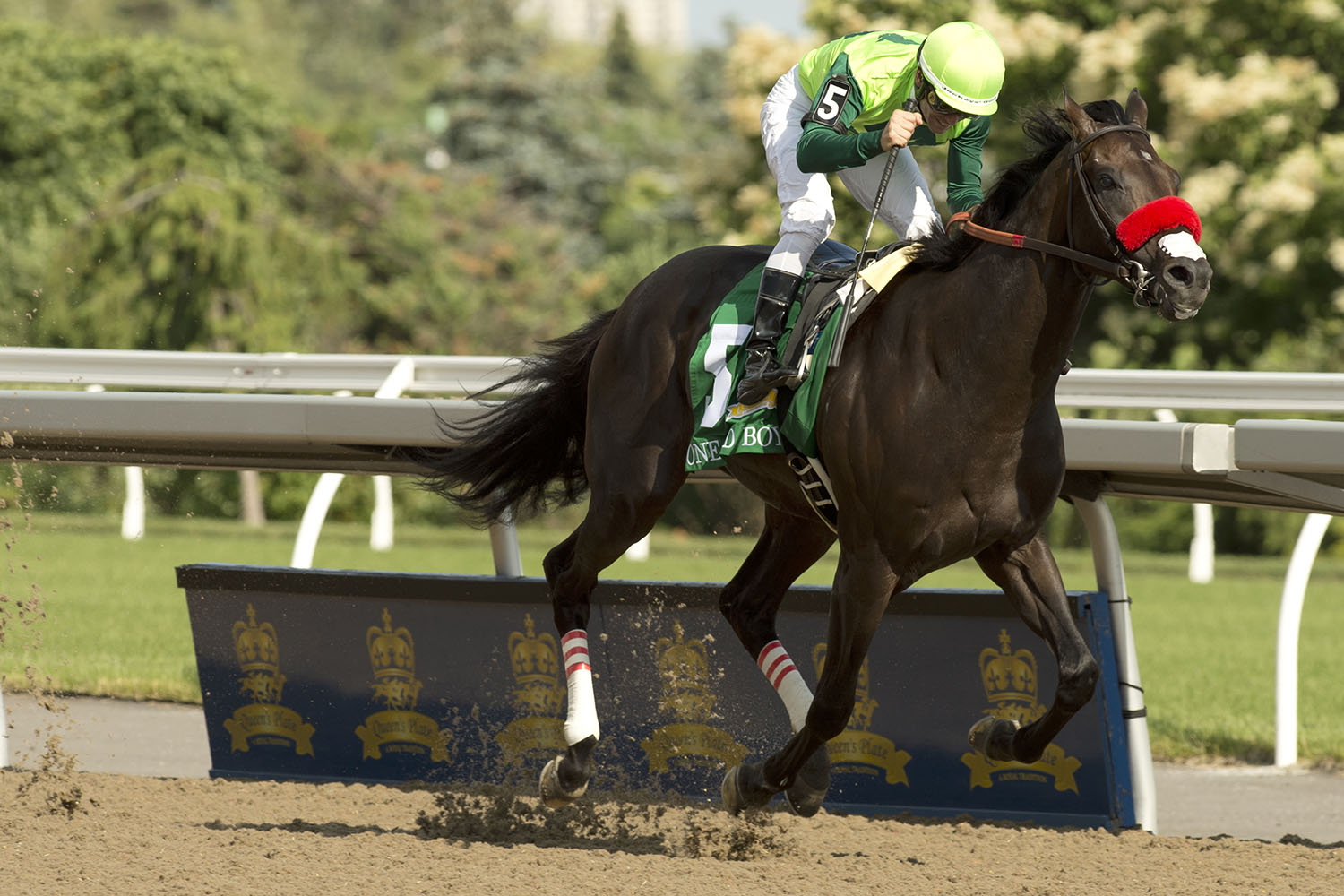 TORONTO, June 29, 2019—One Bad Boy was good to go for the 160th running of the Queen’s Plate on Saturday at Woodbine, taking charge early and fending off a prolonged challenge from Avie’s Flatter to pull away for a 3 ½ length tally under Flavien Prat.

The $1 million Queen’s Plate, the 1 ¼ mile race which is the opening leg of the OLG Canadian Triple Crown for Canadian-bred three-year-olds, was the first Canadian starter for California-based trainer Richard Baltas.

“He (Avie’s Flatter) was next to me, so I knew he was the horse to beat,” said Prat, who was riding his second stakes winner of the day after capturing the $100,000 Charlie Barley with The Black Album.

“By the eighth-pole, I asked him to reengage and he drove away,” Prat continued. “So from that point, I thought I was going to win.”

Prat, winner of this year’s Kentucky Derby when Country House was elevated to first place, becomes the first jockey to win both the Kentucky Derby and Queen’s Plate since Kent Desormeaux completed the feat in 1998 with Derby winner Real Quiet and Plate champion Archers Bay. Bill Hartack also achieved the Derby-Plate double with the immortal Northern Dancer back in 1964.

One Bad Boy and jockey Flavien Prat winning the 160th running of the Queen’s Plate on June 29 at Woodbine Racetrack. (Michael Burns Photo)

The complexion of the Queen’s Plate was altered at the outset when Skywire, the 2-1 post time favourite starting from post 10, did not get away alertly and then was hampered badly by an inward-breaking Tone Broke.

Avie’s Flatter had worked out a good trip after beginning from the outside post 14 and was raced in second-place behind One Bad Boy throughout.

“Second-best today,” said Javier Castellano, jockey of runner-up Avie’s Flatter. “Not much to say. Kept tracking the winner right there all the way on the lead. He never stopped and he never came back to me. I was in perfect position in the race, the race was slow and I was right next to him (One Bad Boy) but I couldn’t get by.”

“I thought Avie’s Flatter ran a great race,” said Carroll. “He stalked the winner all the way and he couldn’t get by him. I think he ran a great race and was second-best today.”

Tone Broke, racing on a synthetic surface for the first time, regrouped following his unfortunate beginning and loomed a threat around the final turn but failed to seriously threaten the top pair in finishing third, 3 ¼ lengths behind the runner-up.

“But after (the start), it was just so perfect. I was just sitting right behind the speed,” said Luis Contreras, who rode Tone Broke for trainer Steve Asmussen.

“I thought I had a really good chance to win. And, it was not enough to win the race, but I’m very pleased how he ran first time on the Tapeta.”

He’s A Macho Man, also trained by Carroll but racing for the Di Scola Boys Stable, closed from well back for fourth money, another 2 1/2 lengths back.

Desert Ride, the lone filly in the lineup, made up some ground but failed to reach serious contention and gave up fourth place in the closing yards, ending fifth as the 6-1 fourth choice

Bred in Ontario by Ron Clarkson, the Twirling Candy ridgling was coming off a second-place finish in the Alcatraz Stakes over one mile of Tapeta at Golden Gate.

“It was awesome, very awesome,” said Greg Hall. “We were a little worried about his ability to run the mile-and-a-quarter, but you saw that… he started pulling away, so we’re very excited about that.”

“It was hard to say anything up there or to even look,” said Hubbard. “But the last (part), we were all so excited.” 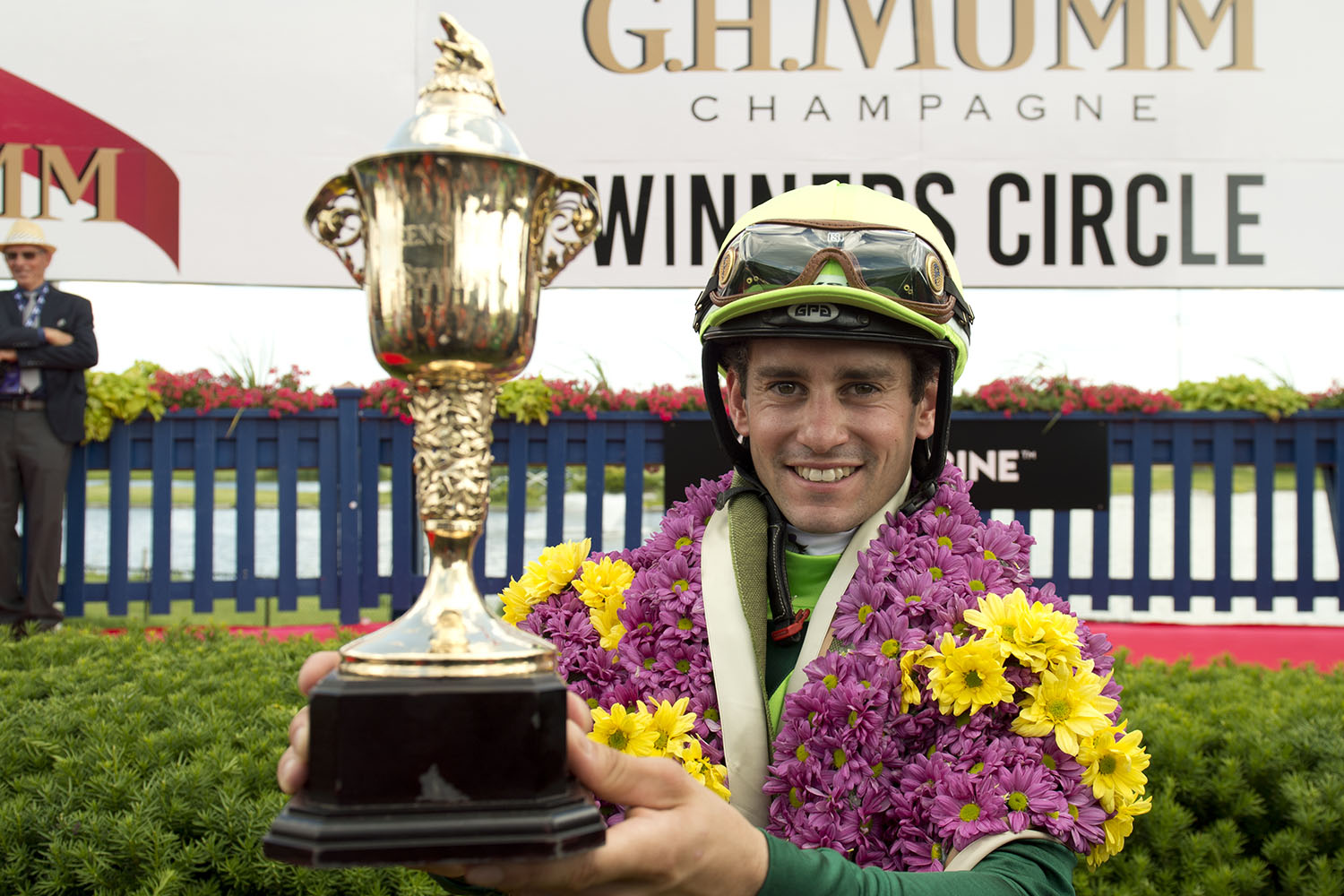 The Ontario Lottery and Gaming Corporation is sponsoring a new $500,000 bonus for a series sweep. Wando, in 2003, was the last horse to sweep the series and the seventh since its exception in 1959.