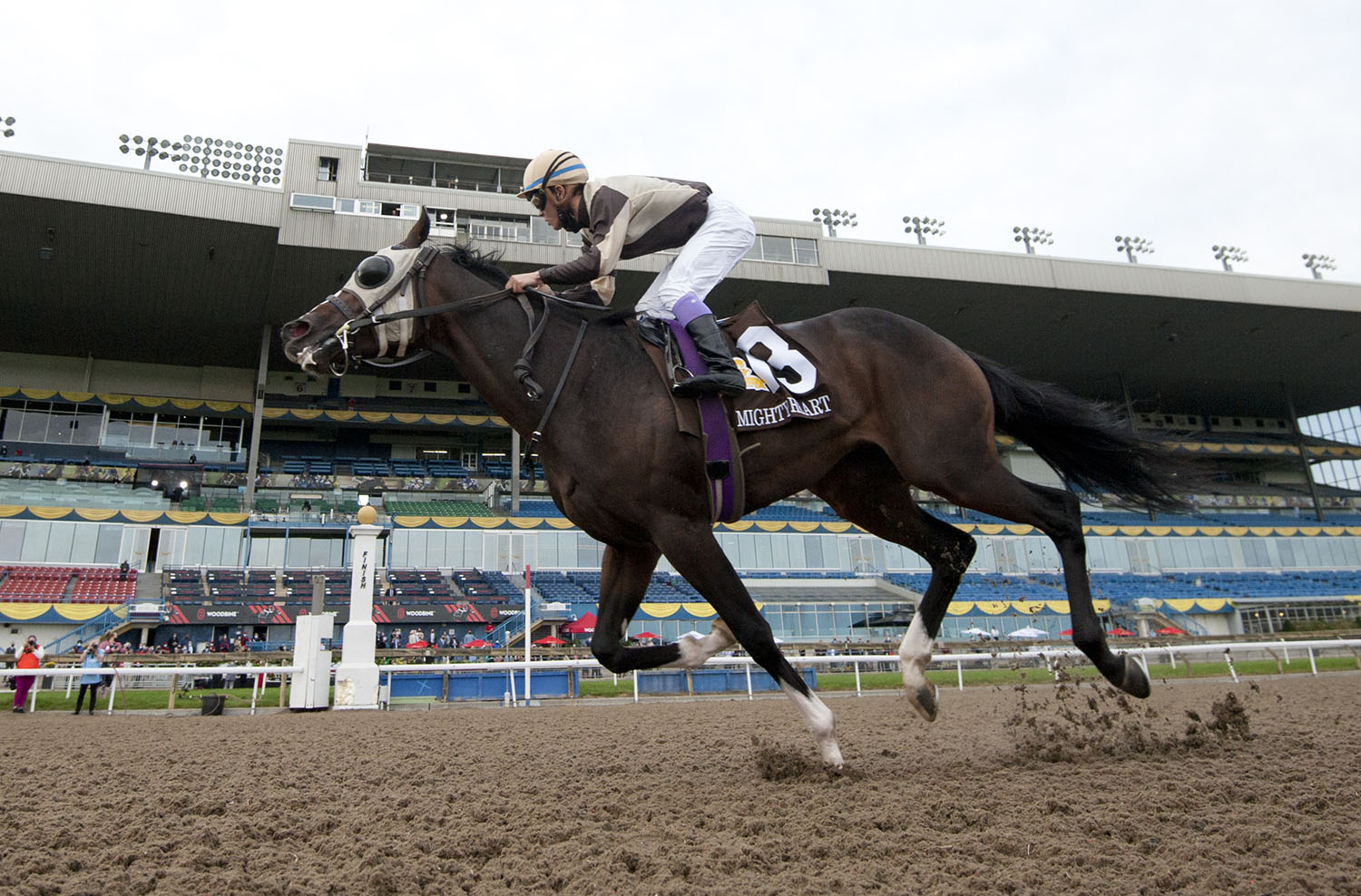 TORONTO, September 12, 2020 – Mighty Heart lived up to his name in a dominating score in the 161st running of the Queen’s Plate, as the one-eyed colt trounced his 13 rivals on Saturday at Woodbine.

Originally slated for June 27, North America’s oldest continually run race was moved to September 12 due to the COVID-19 pandemic.

For the connections of Mighty Heart, it was well worth the wait.

Bred and owned by Lawrence Cordes, the son of Dramedy flew under the radar leading up to the Plate, but the Ontario-bred bay, in his first stakes test, landed in the winner’s circle courtesy of a sensational coast-to-coast score in the $1 million classic.

Sent off at 13-1, Mighty Heart, trained by Josie Carroll, was directed to the front from post 13 as first-time Plate jockey Daisuke Fukumoto guided his charge over to the rail as the field passed the wire for the first time.

Mighty Heart was joined to the outside by Tecumseh’s War, while Truebelieve sat third, with Plate Trial champion Clayton settling in fourth. Woodbine Oaks presented by Budweiser champ and Plate mutuel favourite Curlin’s Voyage was forced into an outside journey as the field headed into the first turn of the 1 1/4-mile Tapeta test.

There was no change in the top four positions as Mighty Heart led the field through an opening quarter-mile in :23.57.

One-length on top after a half-mile in :47.61, Mighty Heart was still yet to be tested, but just after the 1:12.70 three-quarters mark, Curlin’s Voyage, under Patrick Husbands, began a bid from eighth. Rafael Hernandez, aboard Clayton, attempted to get the jump on the Oaks champ, and soon engaged the pacesetter.

As the field turned for home, Clayton was roused to engage Mighty Heart, but to no avail, as the leader easily repelled the challenge and rocketed home to a rousing 7 ½-length victory. 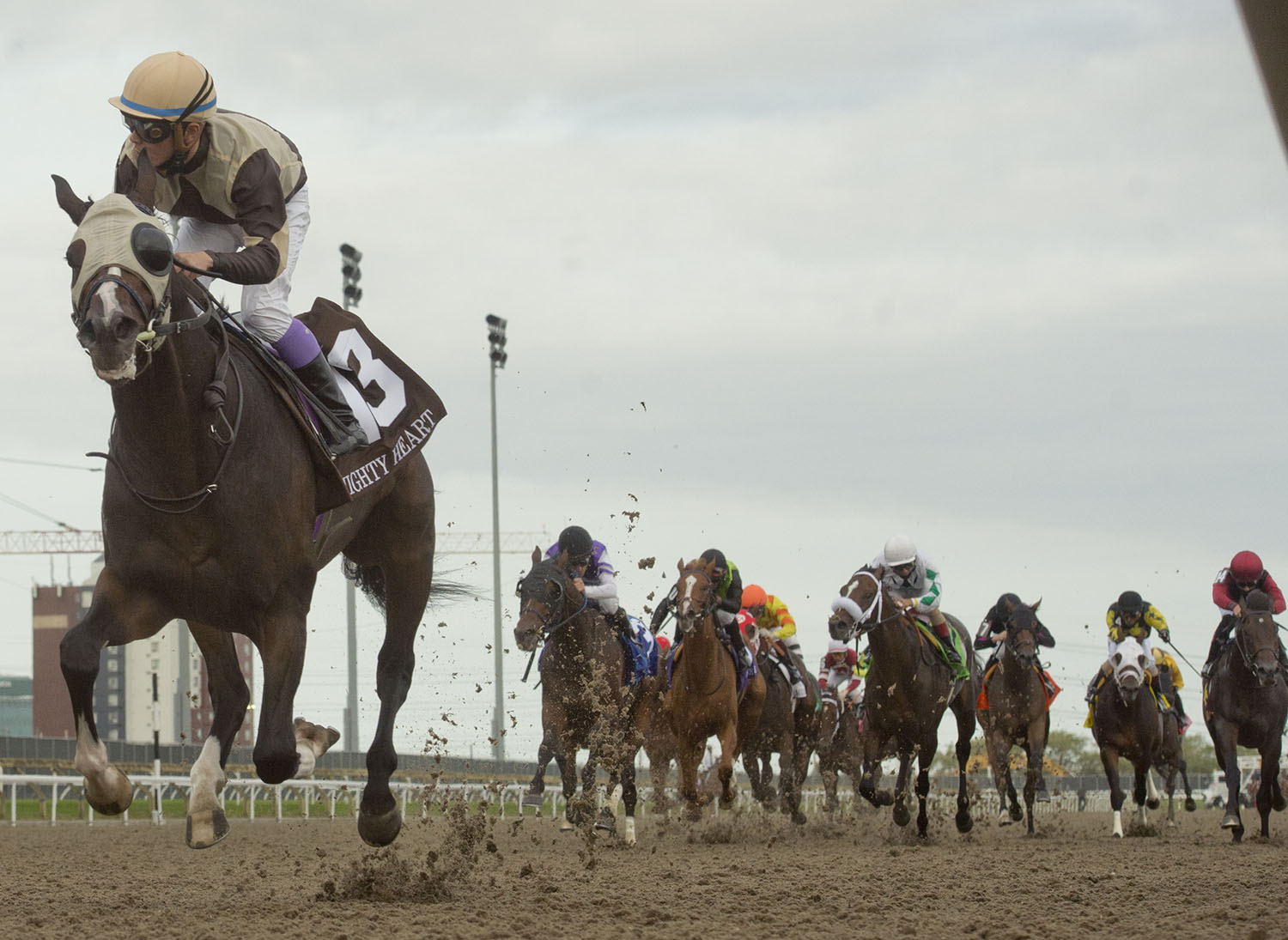 Belichick, under Slade Callaghan, rallied to grab second spot, while Clayton settled for third, a neck in front of Tecumseh’s War. Curlin’s Voyage, Canada’s champion two-year-old filly, was a head back in fifth.

It was a one-two Plate finish for Carroll, who celebrated her third “Gallop for the Guineas” crown. The Canadian Hall of Fame inductee took the 2006 edition with Edenwold and the 2011 running with filly Inglorious.

“I was concerned for a minute or two with the quick fractions but he looked like he was settling and doing it easily,” said Carroll. “We knew he’d go all day and he sure did. You know what, he’s just a very exciting horse who’s come a long way for Mr. Cordes who’s had a lot of confidence in him from the start.”

Fukumoto and Carroll are now a perfect three-for-three when teaming together.

“Unbelievable,” said Fukumoto, making his first Plate start. “I can’t explain…he’s feeling good today, he bolt good. I saw that nobody [was leaving] so I just sent him and he just kept going. After the wire, he still kept going, he didn’t stop there.”

Mighty Heart is now 2-0-1 from five starts. He broke his maiden in his third start, a 4 ¼-length score at 1 1/16 miles on July 11 at Woodbine, and arrived at the Plate off a third-place performance at the same distance.

“He was sharp today,” praised Fukumoto. “I thought it was fast but I took the lead so I can’t do anything, you know…I let him go. He only has one eye, but he’s got a big heart, a mighty heart.”