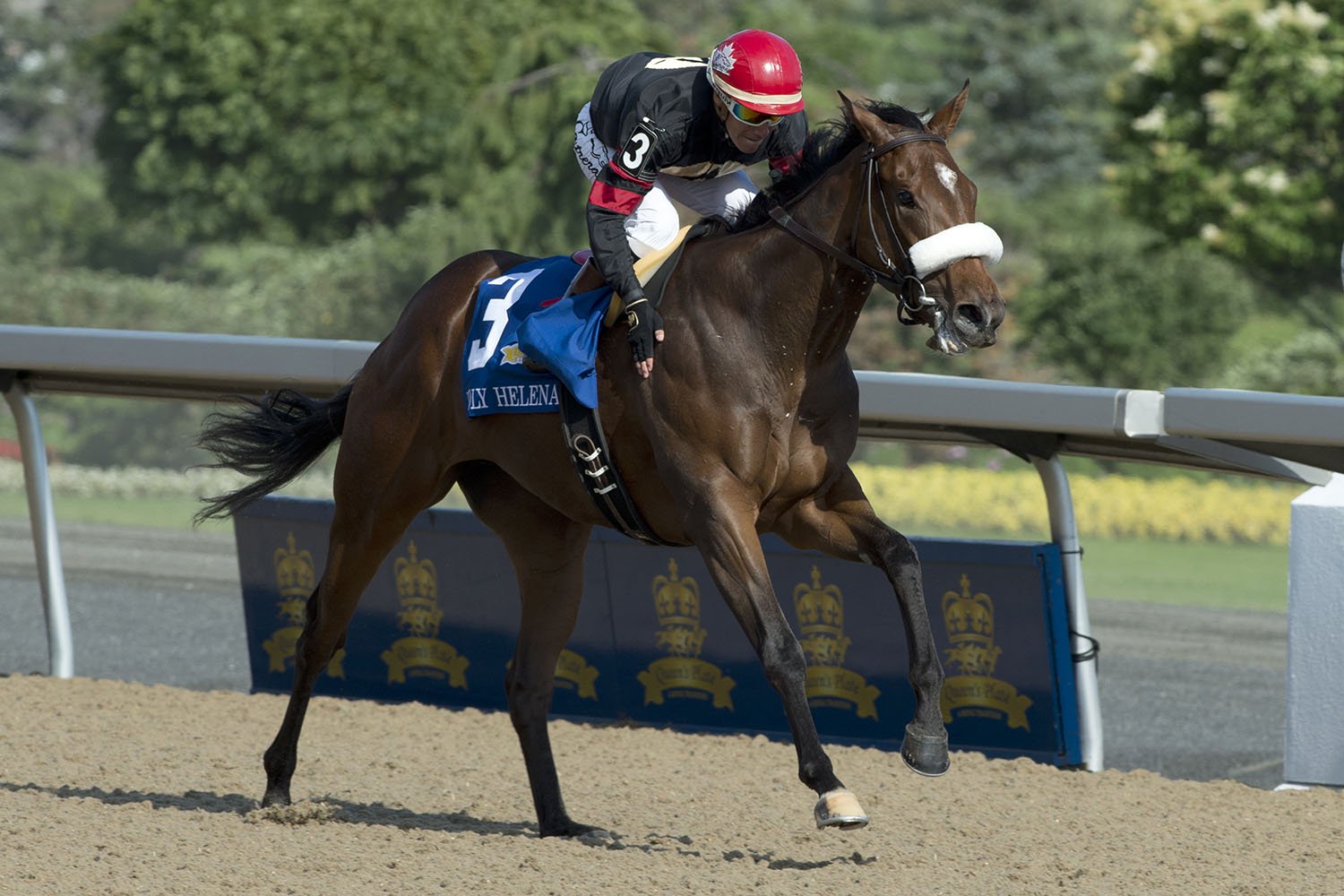 TORONTO, June 26, 2019–It’s only fitting: two years after her dominant victory in the Queen’s Plate, Holy Helena has come home to race on Plate day at Woodbine, albeit in the Dance Smartly Stakes.

The five-year-old daughter of Ghostzapper, owned by Frank Stronach’s Adena Stables, was chosen Canada’s top three-year-old filly in 2017 after she swept both the Woodbine Oaks and the Plate, before finishing second in the G3 Ontario Derby against colts that year.

Eventually, she won the G3 The Very One Stakes at Gulfstream Park (twice) and the G2 Sheepshead Bay Stakes at Belmont Park in May.

Her first six starts had been on dirt and synthetic tracks, but trainer Jimmy Jerkins switched her to the turf to open her four-year-old season. And she promptly won three consecutive races.

“I think the distance [1 ¼ miles of the Dance Smartly] will be to her liking,” said Adena racing manager Mike Doyle. “Jimmy thinks the same way. And if things work out well, it’s a way to get a start in her here, and we’ll talk about it afterwards. She may stay here.”

They have their eye on the E.P. Taylor Stakes, hoping to get a G1 race to her credit, something that would improve her value. “The E.P. Taylor is a long-term goal,” Doyle said. “We want to add to her value the best way we can and not over race her.”

Holy Helena has started only 17 times in her career, with seven wins and $1,211,578 in earnings. She runs best off a rest, although she was pressed to race with only three weeks between the Oaks and Plate and handled it well, Doyle said. She last raced three weeks ago in the New York Stakes at Belmont, finishing fourth, but didn’t have a good trip.

“They walked and she was caught down on the inside and had trouble getting out,” Doyle said. “Then she had to wait for horses to run by to get out. She came running and got beat less than three lengths.”

It was also a 1 ¼-mile race. Jerkens reasoned that Holy Helena really only got to run for a little bit.

Javier Castellano will ride Holy Helena in the Dance Smartly. Last year, she also ran in the Dance Smartly, finishing third, but Jerkens hadn’t really earmarked the race. She came north for a rest, but when Doyle saw her on the farm, and looking so healthy, and the Dance Smartly coming up rather light, he thought it a good spot for her. She finished third, off the farm.

Holy Helena arrived on Thursday at Woodbine, looking the picture of health, with lots of weight. The laid-back mare recognized her Toronto groom, Denzell Fonseca, pricking her ears at the sight of him after shipping well from New York.

Doyle believes this will be Holy Helena’s final year of racing.

Holy Helena will be up against Starship Jubilee, who finished second to Secret Message in the first leg of the Ladies of the Lawn Series, and a three-year-old from Roger Attfield’s barn.

Starship Jubilee, a $16,000 claim for trainer Kevin Attard who turned into Canada’s 2017 champion turf female – after winning the 2017 Dance Smartly and the Nassau – was sold at a U.S. sale last year. But after Kentucky-based Blue Heaven Farm principals Bonnie Baskin and her son Adam Cornduff bought her privately after the hammer fell, they asked Kevin Attard if he wanted to continue training her. He didn’t hesitate.

“She’s been a great filly,” Attard said. “And they were prepared to race her another year if she was healthy and willing and she has been. She has been a wonderful horse for us.

“A mile and a quarter is as far as she wants to go,” Attard said. “We have been working on getting her to relax early in her races and we’re hoping she does that on Saturday.”

Attfield’s stakes-winning Ickymasho has been retired, or he would have entered her in the Dance Smartly. But instead he is sending her stablemate, the four-year-old filly Cartabianca and three-year-old filly Art of Almost.

“Art of Almost gets in with 111 pounds,” Attfield said. “I think she would like that distance and I think that’s a great weight advantage in that race. So I’m going to give a three-year-old filly a go at it.”

The $175,000 Dance Smartly is the eighth of 13 races on a stakes-filled Queen’s Plate day that kicks off at 12 noon Saturday at Woodbine Racetrack. Here is a look at the complete field in post position order: