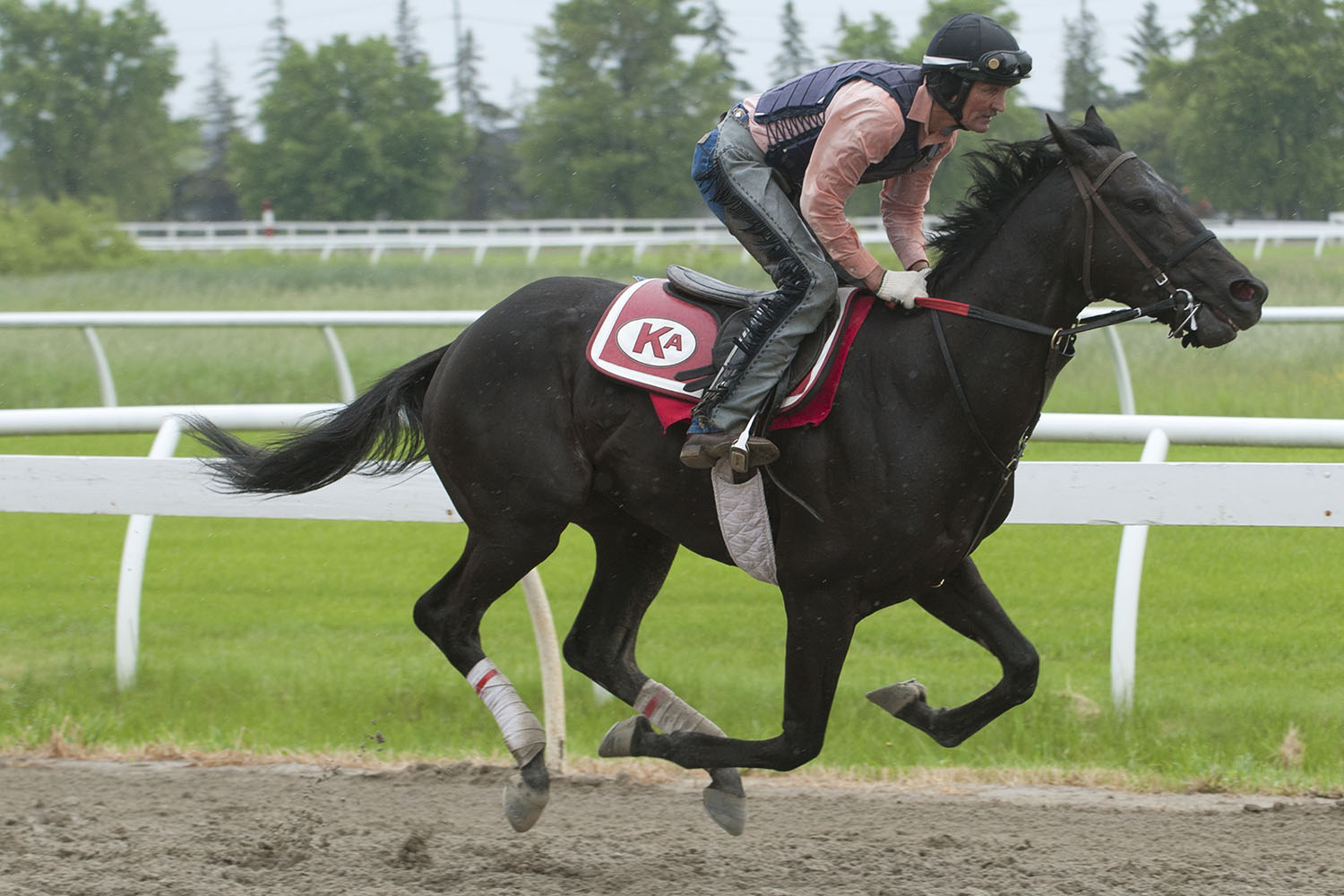 TORONTO, June 25, 2019 – Tone Broke will attract plenty of attention on the strength of his last start, which came in the Sir Barton Stakes on the Preakness undercard and was won by King for A Day, who returned to take down disqualified Kentucky Derby winner Maximum Security in Monmouth’s Pegasus Stakes.

“I really think he could be a top racehorse,” said Michael Levinson, who is a partner in L and N Racing LLC and the racing manager for the outfit.

Bred in Ontario by Sean Fitzhenry, Tone Broke was a $40,000 yearling purchase at Keeneland. “At the time we weren’t really thinking much about the fact that he was Canadian-bred,” said Levinson.

The Broken Vow colt’s career began inauspiciously with fringe placings over one mile at Indiana Downs and Remington Park, both on “off” tracks. But Tone Broke took no prisoners in his next start at the Oklahoma oval, scoring by more than more than 15 lengths over the same distance on fast going.

After following up with a sharp score under first-level allowance terms at the same distance, Tone Broke made his stakes debut in the rich Springboard Mile. “He ran a really hard-closing fourth there and then we decided to give him a shot, and sent him over to Dubai.”

The United Arab Emirates Derby, a “win and you’re in” race for the Kentucky Derby, was Tone Broke’s ultimate target in the desert. But he did not make that big race after two lacklustre performances over the Meydan oval, both over 1 3/16 miles.

“We thought he might like the added distance over there,” said Levinson. “It just didn’t work out—I think those are just toss races. So we brought him back in, gave him some time after that trip, and sent him up to that Sir Barton and he ran a really, really nice race. We’d been looking at the Queen’s Plate for some time. After his last start, we just decided to lay him off, and just train up to the race. He should be fresh.”

Levinson is fairly confident that the Queen’s Plate distance will be within Tone Broke’s scope. “He looks like he wants to go longer,” said the racing manager. “He’s a big horse.”

He acknowledges that the Tapeta track is another story as the colt has never raced on and has yet to train on a synthetic strip. “That’s a little bit of a question mark for us, whether he’s going to take to that surface or not,” he said.

TORONTO, June 25, 2019 – For years, Derek Chin had hoped he’d one day have the opportunity to win the Queen’s Plate. On Saturday, the owner will get that chance when Jammin Still goes postward in the $1 million Canadian classic at Woodbine Racetrack.

The dark bay colt, trained by Kevin Attard, will be a longshot for the 160th edition of the Plate. But for the man who owns the Ontario-bred son of Take Charge Indy, having a horse in the big race is a dream come true.

“My dad was very involved in horse racing,” recalled Chin, who accompanied his father on visits to Trinidad’s racetracks nearly every weekend. “That experience, being around the horses and the racing, never leaves you. I was around 9 or 10 when I was first introduced to horse racing.”

During his schooling days in Canada, Chin, born in Guyana, but raised in Trinidad, would put studying on the shelf for a few hours on the weekend to take in the races at Woodbine.

And, just as he did in Trinidad, he stood as close to the action as possible.

“I went Trinity College in Port Hope and then I went to the University of Western Ontario in London,” noted Chin. “I lived in Toronto for about 15 years in the 70s and 80s.  When I was in university, I would always go to the racetrack and I enjoyed watching great jockeys like George Ho Sang and Sandy Hawley ride. I always looked at them from a distance because I was shy.”

Eventually, Chin, a successful businessman who founded MovieTowne in his native Trinidad, mustered up the courage to introduce himself to trainers and jockeys. The conversations and friendships forged would eventually lead him to become a Thoroughbred owner.

His biggest star to date is Trini Brewnette, a daughter of Milwaukee Brew who won at first asking in August 2015. The bay filly also took top honours in the South Ocean Stakes that same year, getting up to win by a nose.

Now, he’ll look to Jammin Still, bred by the late William Graham, to deliver his most memorable victory.

“I love the racing in Canada,” said Chin. “I would love one day to win a big race and be able to say that I come from a small island in the Caribbean, but I’ve won against the biggest and the best. It would be a crowning achievement for me. My goal is to win the Queen’s Plate or a Woodbine Oaks one of these days. I dream like everyone else does.”

On Saturday, Jammin Still, a one-time winner from five starts, to be ridden by Alan Garcia, could make that dream a reality.

“Derek is a great owner and he’s supported me very well,” said Attard. “He’s ecstatic that he’s going to have some his family here, along with his friends, for the big day. He’s really looking forward to it and hopefully we can put some smiles on people’s faces.”

Trained by Katerina Vassilieva, Pink Scribbles arrives at the seven-furlong feature for Ontario-sired fillies off a thrilling maiden-breaking score on June 8.

The three-year-old daughter of Signature Red didn’t make the milestone moment easy on her connections.

At the wire, Pink Scribbles, who was eighth at the half-mile mark of the six-furlong race, rallied determinedly to prevail by a neck in a time of 1:11.79.

Despite the slim margin of victory, Vassilieva wasn’t complaining.

“That second-place horse (True Castle) was coming at us fast,” she recalled. “I’m glad we got to the wire first and didn’t have another second. She’s been a consistent horse. I knew it was just a matter of time before she finally got that win. We’re happy to have it.”

Owned by Stephen Chesney and Cory Hoffman, the bay, bred by Howard Walton, has one win, five seconds and a third from eight career starts.

Launching her career with a second-place finish over five furlongs on the Woodbine main track last August, Pink Scribbles hasn’t finished lower than fourth to date.

It was Pink Scribbles’ third start, at 6 1/2 furlongs over the Toronto oval Tapeta on October 13, which really caught the attention of her connections.

“It was a big field, 12 horses and we had post 12,” recalled Vassilieva. “We didn’t know what to expect. She broke a little bit outwards and there was a lot of traffic. But she weaved her way around everybody and came running at the end like she always does. She was third and didn’t get beat far. Right there, we thought, ‘Wow… she’s a trier.’ Everything could have stopped her, but she came running.”

Vassilieva is hoping Pink Scribbles has shed her penchant for runner-up finishes.

“Every time this horse runs, I expect a good effort out of her,” said the stakes winning conditioner. “She’s shown us she’s a trier. If she didn’t run well, I’d know something was wrong with her. She’s always trained with confidence and I definitely think she’ll improve off that last effort. We’ve always wanted to try her a little bit longer, but because of scheduling and different things we’ve always ended up running six furlongs. I’m happy with the stretch-out in distance because she likes to settle and come with a run.”

While she’s shown strong late brush time and again, there is one thing Pink Scribbles has no time for.

“She doesn’t like to be brushed, that’s her only real quirk. She gets a little bit feisty then. But she’s always been wise beyond her years, even when she was two.”

Last year, Fairy Hill ($8.60 to win) won the Lady Angela, with Jeffrey Alderson in the irons.

Fans can also watch and wager on all the action via HPIbet.com.

The post position draw for the 160th running of the $1 million Queen’s Plate, first jewel of the OLG Canadian Triple Crown, will take place tomorrow morning (Wednesday, June 26) at 9:30 a.m. in the Trackside Clubhouse at Woodbine Racetrack.

The Queen’s Plate preview show with Brian Williams, Jim Bannon and Jason Portuondo will air on Thursday night (June 27) at 7:30 p.m. to 8 p.m. on TSN.

The Queen’s Plate Day wagering menu will feature a total of $700,000 in guaranteed Pick 4 and Pick 5 pools, including: