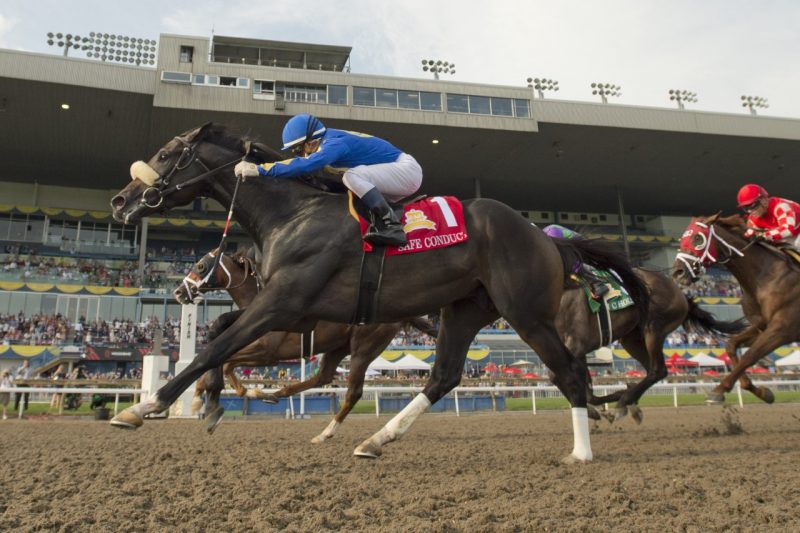 TORONTO, August 22, 2021 – Safe Conduct had just enough left in the tank to take the 162nd running of the $1 million Queen’s Plate, North America’s oldest continually run race, as the son of Bodemeister bested a hard-charging Riptide Rock by a head, Sunday at Woodbine.

Bred by Ontario’s Mitchell Kursner, the bay colt had never raced over the Toronto oval Tapeta prior to the 1 ¼-mile classic.

With Irad Ortiz Jr. aboard, Safe Conduct’s Canadian debut was certainly a thrilling and memorable one, winning the first leg of the OLG Canadian Triple Crown of Thoroughbred Racing. 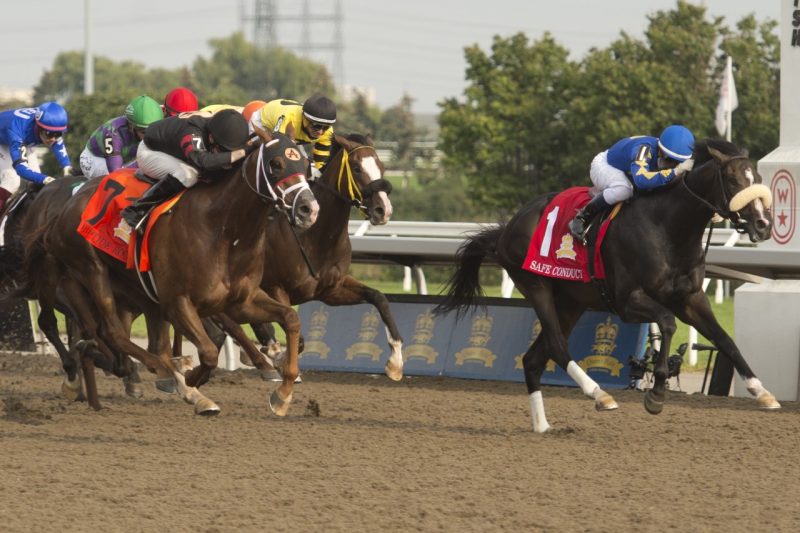 Sent off as the slight 3-1 choice, Safe Conduct, trained by Phillip Serpe and owned by WellSpring Stables, broke well from post one and got away second as Take a Chance led the field past the wire for the first time, with Go Take Charge and Haddassah next in line.

Take a Chance continued to call the shots on the front end with Safe Conduct shadowing the leader through an opening quarter in :24.01. Woodbine Oaks Presented by Budweiser champion Munnyfor Ro, sat fifth.

As the field raced along the backstretch the two pacesetters continued to show the way. Take a Chance was a length in front of Safe Conduct after a half reached in :48.37.

As the field rounded the turn, Safe Conduct, on the inside, struck front, maintaining a half-length lead over Keep Grinding at Robert Geller’s stretch call. Riptide Rock, last at the quarter and half, and second to last at the mile mark, began to pick up steam on the far outside, passing rivals one-by-one until he was a clear second.

“He’s shown some speed before to the half, :48,” said Ortiz Jr., who was riding in his first Plate. “We thought maybe two horses had speed and we want to be out of the traffic, so I broke running. I sat second on the clear, I bided my time, waited for the right time to roll and when I asked him to go, he kept fighting down the stretch. He kept moving forward. I saw somebody was flying outside… that was very close, I didn’t know if I won the race after the wire but thank God I did.”

“Blessed,” said Kursner. “Blessed. I want to congratulate Dr. Vukevich and the wonderful people at WellSpring. They’ve done a marvelous job bringing this horse along. And of course, Phil Serpe.”

Safe Conduct is now 3-1-0 from seven starts. He broke his maiden in his second engagement, a 1 ¼-length win over the Saratoga turf last August.

“He’s been training like a bear,” noted Kursner. “The rule of thumb is that if you’re a nice horse on the turf, you’ll translate on the Tapeta and we’re just delighted. Delighted.”

As was Ortiz Jr.