Saturday stakes in the books to launch #QP21 weekend 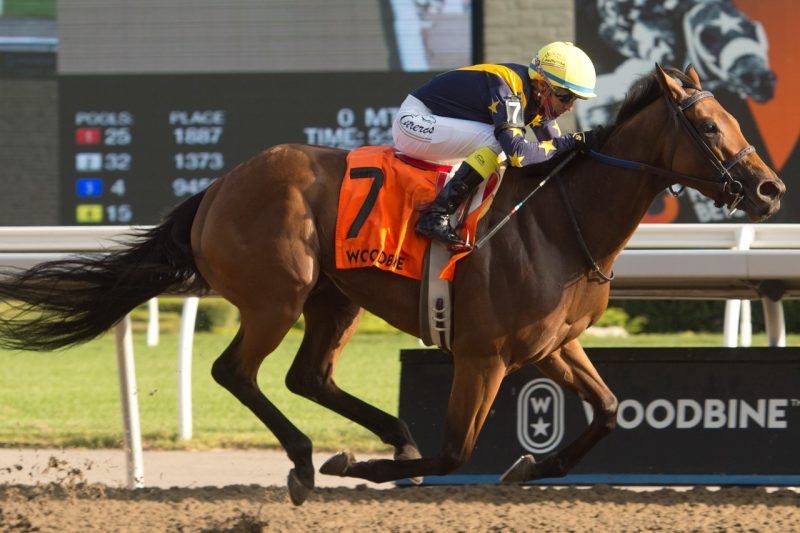 TORONTO, August 21, 2021 – Woodbine kicked-off Queen’s Plate weekend with a quartet of stakes events on Saturday’s 11-race card. The recaps of each stakes contest are available below.

TORONTO, August 21, 2021 – First Empire, prominent throughout, took charge around the final turn and held off Degree of Risk to score by 1 ¾-lengths in Saturday’s $140,250 Soaring Free Stakes at Woodbine.

The Soaring Free, a 6 ½-furlong turf race for 2-year-olds, attracted a field of six and kicked off the first of back-to-back four-stakes programs at the Toronto oval on Queen’s Plate weekend.

First Empire, conditioned by Mark Casse, had finished a faltering fifth when debuting here on the Tapeta, but then was a game front-running winner over six furlongs of turf with returning rider Patrick Husbands in the irons.

“When I breezed him in the morning, he’s okay, but on the grass, as he’s shown in his last two races, he’s a different horse,” said Husbands. “I had so much horse swinging for home. I knew it would take a real nice horse to beat him.”

In the Soaring Free, First Empire pressed Indiana invader Heaven Street while racing just outside through an opening quarter in :22.49 and led that one by a length as he got the half in :44.37.

Degree of Risk, invading from Illinois for trainer Eoin Harty, was making his turf debut and impressed, finishing second, despite racing greenly through the lane.

Heaven Street wound up third, 7 ¼-lengths behind the runner-up.

Twenty Four Mamba, who like First Empire is a son of the Casse-trained Eclipse Award-winning 2-year-old Classic Empire, was another 3 ½-lengths back in fourth.

Concealed Carry never menaced in finishing fifth and Silent Farewell, a troubled second behind First Empire when debuting here August 1, failed to enter contention as the 9-5 favourite and checked in last.

First Empire, owned by Dick Bonnycastle’s Harlequin Ranches, is out of the Macho Uno mare Silsita and is the first stakes winner for both his dam and his freshman sire. Bred by Saintsbury Farm, First Empire was a $60,000 yearling at Fasig-Tipton Kentucky’s October sale.

Casse won last year’s Soaring Free with Gretzky the Great, who used the race as a stepping-stone to success here in the Grade 1 Summer Stakes and went on to be honoured as Canada’s Outstanding Male Two-Year-Old.

Diabolic delivers again, this time in Catch A Glimpse

TORONTO, August 21, 2021 – Diabolic, under a patient Antonio Gallardo, found daylight along the rail and took off in the stretch to win the $127,250 Catch A Glimpse Stakes, Saturday at Woodbine.

The daughter of Dark Angel-Seafront arrived at the 6 ½-furlong turf event for 2-year-old fillies off two straight scores to launch her career, including an impressive effort in the My Dear Stakes on July 31 at Woodbine.

Despite acting up in the gate, Diabolic, at even-money, settled down to deliver trainer Mark Casse and owners D.J. Stable LLC & Nexus Racing Club, with a natural hat trick.

Silver Magnatized and Curlin Candy dueled for the early lead as Gallardo and Diabolic were an unhurried seventh of eight through a quarter in :23.19.

After Silver Magnatized took the field through a half-mile in :46.29, Gallardo roused Diabolic, and as the field straightened for home, the pair took aim at the frontrunners, steadily gaining along the inside to grab a one-length lead at the stretch call.

At the wire, Diabolic was a one-length winner in a time of 1:15.81 over firm going. Royal Engagement was second, while Miss Barbara, also a Casse trainee, finished third.

“She ran pretty good off the pace,” said Gallardo after the local prep for the Grade 1 $400,000 Natalma Stakes on September 19, a Breeders’ Cup “Win and You’re In” event. “I saw a couple of horses with speed today going a little longer distance than last time, so I settled down; tried to save some ground. She’s a nice filly. I saw the inside hole and I only asked her a little bit and she just rolled.”

The grey, bred in Ireland by Yeomanstown Stud, paid $4.30 for the win.

“She’s improved,” said Gallardo. “Every race, she tells you she’s something, no matter if it’s five furlongs, 6 ½, Polytrack, 6 ½ on the turf… she’s classy. She can do everything all the time.” 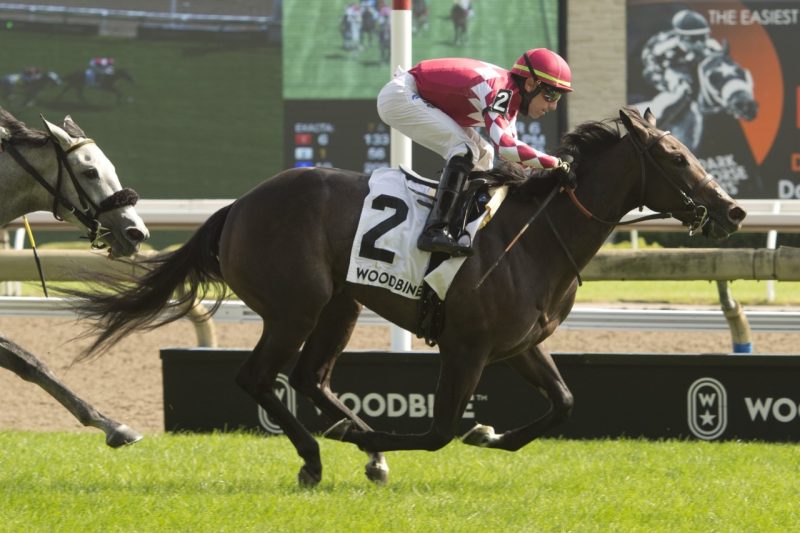 It was a fitting victory for Casse, who conditioned Catch A Glimpse, Canada’s Horse of the Year, Outstanding 2-Year-Old Filly, and Outstanding Turf Female of 2015 after winning Woodbine’s Grade 1 Natalma and the Breeders’ Cup Juvenile Fillies Turf at Keeneland.

“Today we got a very bad [post] position, that’s why I focused on the one move,” said Kimura, who had started from the outside. “I’d like to just switch him to the inside, focus on keeping him comfortable. He made a steady pace and just moved so well.”

Corelli, who was giving his trainer Jonathan Thomas his first Canadian victory, had sat patiently towards the rear of the eight-horse field as longshot Peace of Ekati set the pace with 5-2 second choice Belichick keeping close order through a quarter in :25.90, half in :50.55, and six furlongs in 1:14.91.

Belichick moved to the lead in early stretch, holding a half-length advantage through a mile in 1:38.51 and a half-length margin with a furlong to run.

Corelli was on the march, however, and finding a seam in midstretch, was quick to seize the advantage and held the closing English Conqueror at bay while finishing in 2:01.70 over firm ground.

“I watch all the time before the race what’s in the program, watching the horse, watching the jockeys,” said Kimura. “Just hoping that I’d get room [in the stretch]. And I did it.”

English Conqueror, an 11-1 shot, stalked from towards the rear of the field was up to gain the place by a length over Belichick.

Theregoesjojo, at 9-1, was in touch throughout and missed third money by just a neck.

Primo Touch, Peace of Ekati, the 9-5 favourite Eons, and Woodbridge, completed the order of finish.

Corelli, a 6-year-old gelding, is a homebred who races for George Strawbridge’s Augustin Stable. Bred in Kentucky, Corelli is by Point of Entry out of the Diesis mare, Vignette, and was recording his first graded stakes score in the Singspiel. 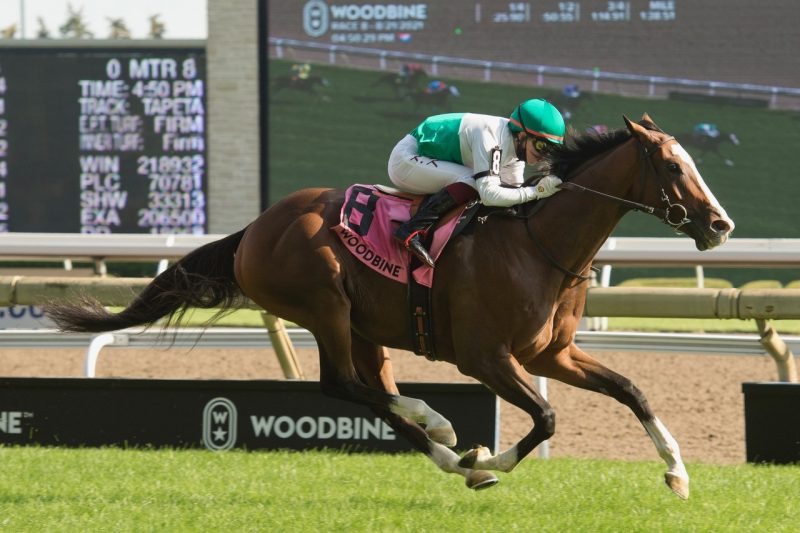 A three-time winner in England, Corelli relocated to North America in 2020, placing in last year’s Grade 1 United Nations at Monmouth Park, and won the listed Henry S. Clark at Pimlico in his 2021 opener.

“He’s a classy horse,” said Kimura. “I’m so appreciative to the owner and the trainer, and I hope I get another mount on him.”

Boardroom all business in Seaway

Luis Contreras looked confident from the moment the gates opened in the seven-furlong Seaway, for fillies and mares, 3-year-olds and up, piloting the Josie Carroll trainee to the easiest of victories in the main track stakes event.

After breaking sharply from the outside post seven, Boardroom was settled comfortably into fourth as Toffen seized the early lead and took her rivals through an opening quarter timed in :23.34, as Hell N Wild and Fiduciary followed in second and third, respectively.

Toffen, ahead by 1 ½-lengths after a half in :46.39, was soon confronted by rivals to her outside, a group that included 6-5 choice Boardroom.

As the field rounded the turn for home, Contreras took a quick glance to see if any closers were coming to call, before giving the 4-year-old daughter of Commissioner her cue.

From there, it was game over.

The duo dashed away from their pursuers with ease, widening their advantage with every stride, crossing the wire 4 ½-length winners. Our Secret Agent finished second, two lengths ahead of Amalfi Coast.

“We had a good break, and I was in control of the race every single step of the way,” said Contreras. “She always surprised me, even in the morning and the afternoon. Every race she gave me, she showed me some improvement. So, I’m very happy with this filly. I love her.”

It was the fifth win, along with one second and a third, from seven starts for Boardroom, who also counts stakes scores in the Duchess and Grade 3 Whimsical.

“She’s just a really special filly,” said Carroll. “I think we knew from the moment she came in that she had the capability, and she’s just blossomed as she’s gotten older. We’re so fortunate that LNJ Foxwoods would send her to us.

“I think we’ll see how she comes out of it, but we do have a great sprint series here at Woodbine. So, it’s a wonderful place for her to be.”

The 162nd running of the Queen’s Plate is set for Sunday as part of a stakes-filled card at Woodbine. First post is 12:25 p.m.