With Luis Contreras aboard, Newstome made headlines with a commanding victory in the season’s first stakes event for trainer Michael Trombetta and owner Marie Trombetta.

Leaving from the inside, Aye Aye Sir charged out along the rail in the Woodstock with Lookinatamiracle and outsider Untitled looming through a :22.30 first quarter. The outside foes continued to press the pace into the turn and past the :45.14 half-mile mark with Newstome, who had stalked the front-runners early, joining the fray then sprinting away down the stretch for the wide-open win in 1:09.99. He ran off by 5-1/2 lengths, with Untitled chasing in second and Lookinatamiracle edging out Aye Aye Sir for the third-place honours. Striking Moon and Stormy Soul completed the order of finish.

“I got a great trip,” said Contreras afterwards. “He broke running and I was able to save ground and get in the stalk position. In the middle of the turn, I was just loaded with a lot of horse and turning for home, he just ‘go.’” 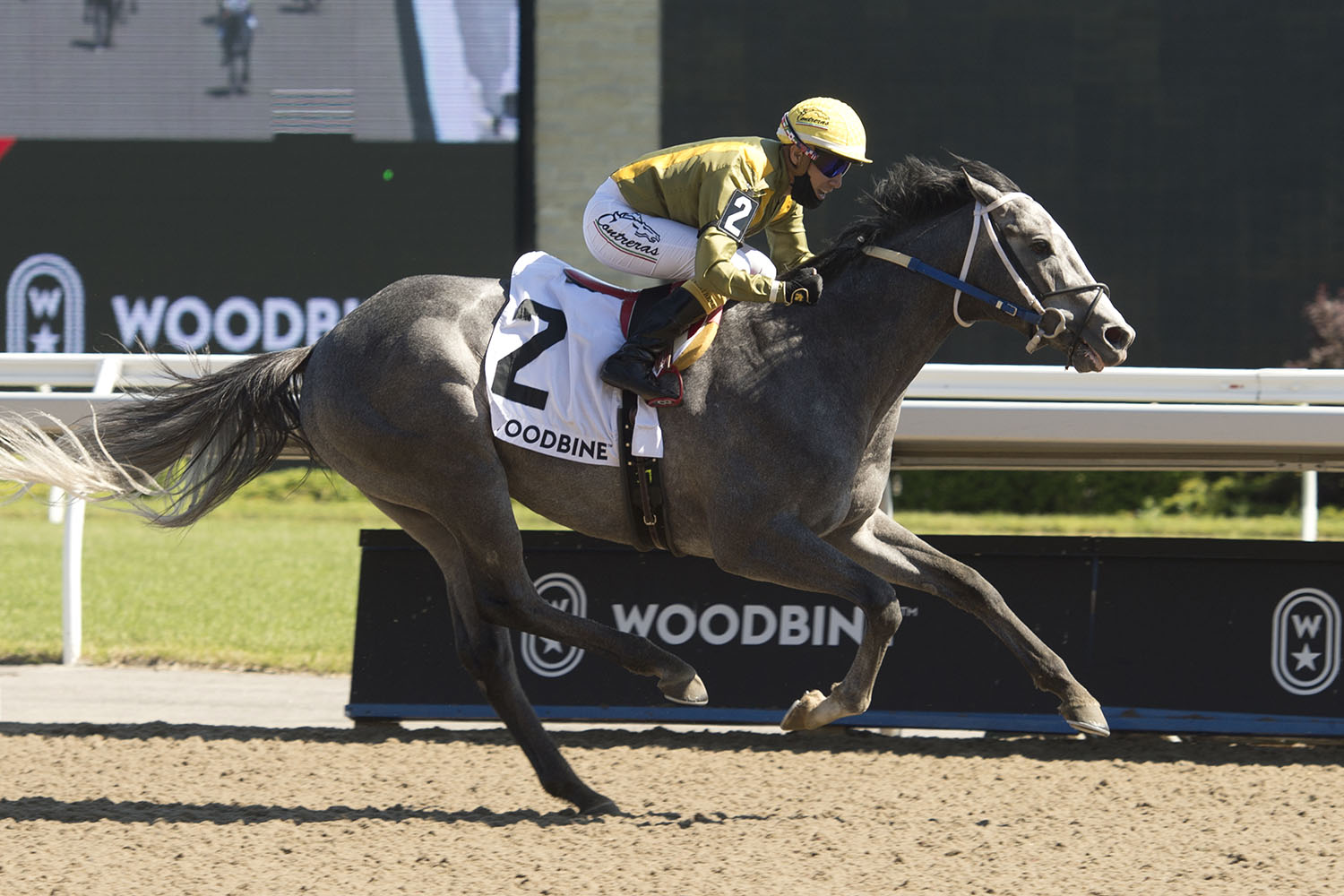 Bred in Pennsylvania by Equivine Farm, the grey Goldencents-Newstouse colt, who won a pair of Black Type stakes stateside during a $175,000 juvenile campaign, was making his Woodbine debut and now boasts wins in half of his eight career starts.

In addition to picking up the mount on the stakes winner, Contreras is off to a great start to the season with four other victories so far through the first four race days.

“It’s been a long wait and the most important thing right now is to stay safe, and stay like that for the whole rest of the meet.”

Clayton and supplement Muchmorethanthis were scratched and entered in Sunday’s ninth race, a $101,200 seven-furlong allowance race.

In the Star Shoot, Owlette set out for the lead from the gate and never looked back, winning her season’s debut for jockey Jerome Lermyte and trainer Wesley Ward.

Owlette clocked panels of :22.13 and :44.12 en route to victory 1:09.55 by 1-3/4 lengths over Sovereign Award champion filly Curlin’s Voyage, who got up for second off a ground-saving trip. Coach Lori finished third after closing outside of Two Sixty, who was used early and stalked the winner throughout. 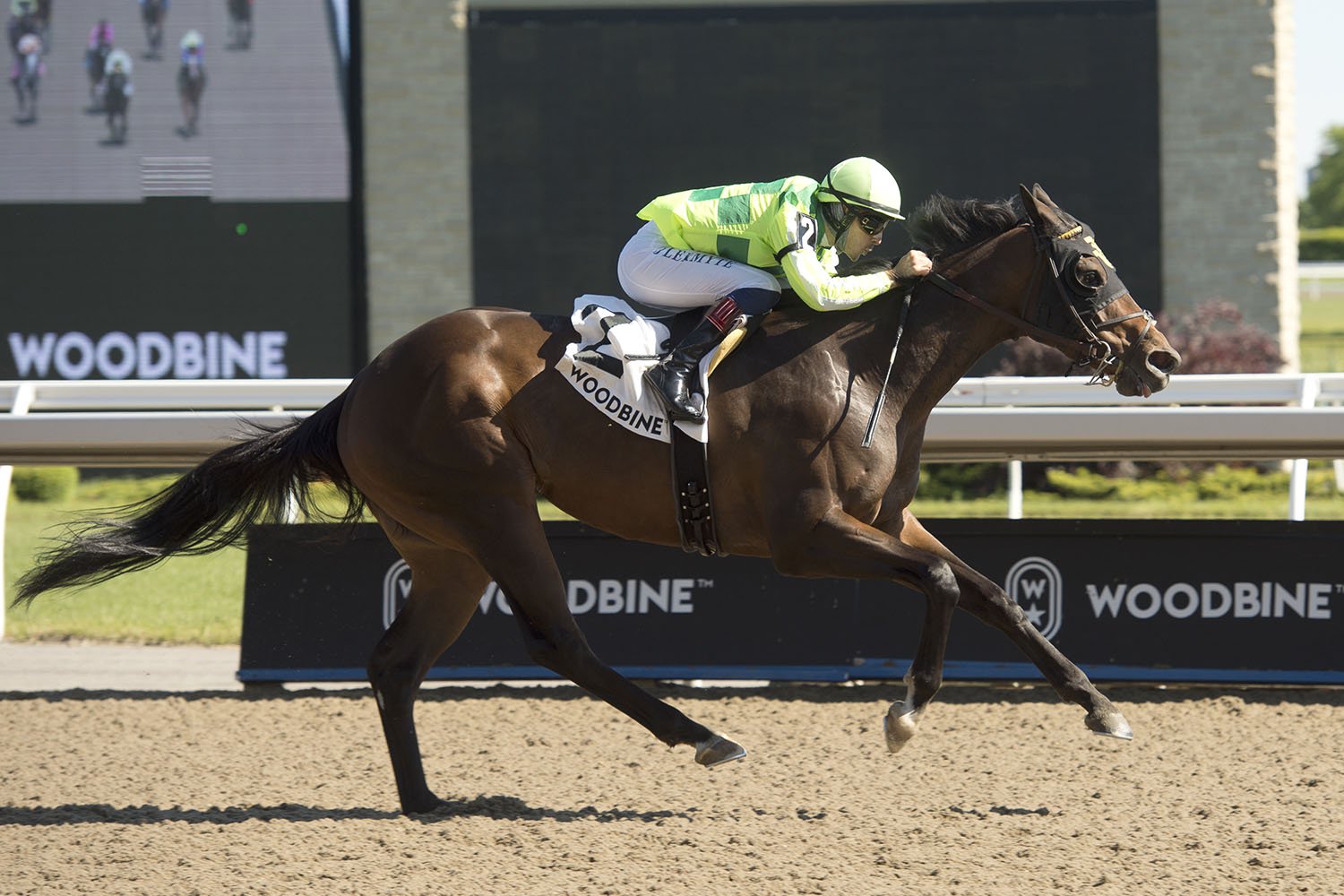 Owlette, who paid $6.50 to win as the slight 2-1 favourite, was successful in her season’s debut after winning the Shady Well and Victorian Queen Stakes last year at Woodbine for owner Ten Broeck Farm. Bred in Ontario by Michael Byrne, she now sports a career record reading 4-2-0 in six starts with $235,000 banked in purse earnings.

The Frac Daddy-Itstartswithadream filly made a great first impression on Lermyte, who picked up the mount as Patrick Husbands stayed aboard Curlin’s Voyage.

“I had the chance to get on her a few times in the morning and I was very confident, and she proved today that she has the ability,” said Lermyte. “The whole trip she kept me confident. When we turned for home, she was still nice and relaxed. I knew I had more – I had another gear – and I was confident the whole way.”

Commenting on Owlette’s ability to stretch out in distance, Lermyte noted that, “She went a mile and sixteenth [last year finishing second in the South Ocean Stakes] and she ran a good race. Wesley puts his horses on point, so you don’t have to worry about anything.”

Owlette and Artie’s Princess, who won a five-furlong allowance race on Opening Day for Lermyte and Ward, are both nominated to the Woodbine Oaks (August 15) and The Queen’s Plate (September 12).

“She [Artie’s Princess] gave me a very nice race. I was very happy with her so that’s two nice fillies,” said Lermyte.

In other action, Woodbine Oaks eligible Avie’s Samurai ($7.90) was an impressive winner in the afternoon’s opener, taking the lead in the turn and winning the $101,200 seven-furlong allowance optional claiming sprint by 4-3/4 lengths in 1:24.14. Contreras was aboard the homebred First Samurai-Avie’s Sense filly for trainer Josie Carroll and owner Ivan Dalos.

The Queen’s Plate nominated Golden Wave won his Woodbine debut with a 1:23.72 effort over seven furlongs in the fourth race, a $123,200 maiden allowance. The Atreides-Tidal Surge colt pressed the pace and turned into the stretch with the lead en route to a two-length victory over Fort Hope for trainer Mike De Paulo and owner Mickey Demers. Justin Stein rode the 13-1 upsetter, who returned $29.30 to win.

Live Thoroughbred racing continues, without spectators, on Sunday afternoon with an 11-race card beginning at 1 p.m.

Both added-money events, to be contested at six panels over the Tapeta track, have attracted notable contenders for the $500,000 Woodbine Oaks Presented by Budweiser (first leg of the Canadian Triple Tiara, slated for the August 15 card, which also includes the $150,000 Plate Trial) and the $1 million Queen’s Plate, moved to September 12 after race date changes resulting from COVID-19 pandemic closures.

Kevin Attard, a finalist for Canada’s champion trainer honours in 2019, is represented by Clayton in the Woodstock.

A bay son of Grade 1 champion Bodemeister, Clayton, owned by Donato Lanni, made a sterling debut last November at Woodbine.

The Ontario-bred, listed as the 16-1 eighth choice in the Queen’s Plate Winterbook, overcame a slow start to dominate the five-furlong main track race by 7-1/2 lengths.

“I honestly thought he’d be on the lead from start to finish,” said Attard. “That’s the only thing that surprised me. He broke tardily, but I was happy that happened because he had to sit behind horses, relax and be patient a bit. When he angled out and took off, he won like I thought he would.”

Although the race, at least early on, didn’t unfold as he anticipated, Attard reiterated the point of it being a useful learning experience for the colt.

“It probably did him more of a world of good than it did me watching the race.” 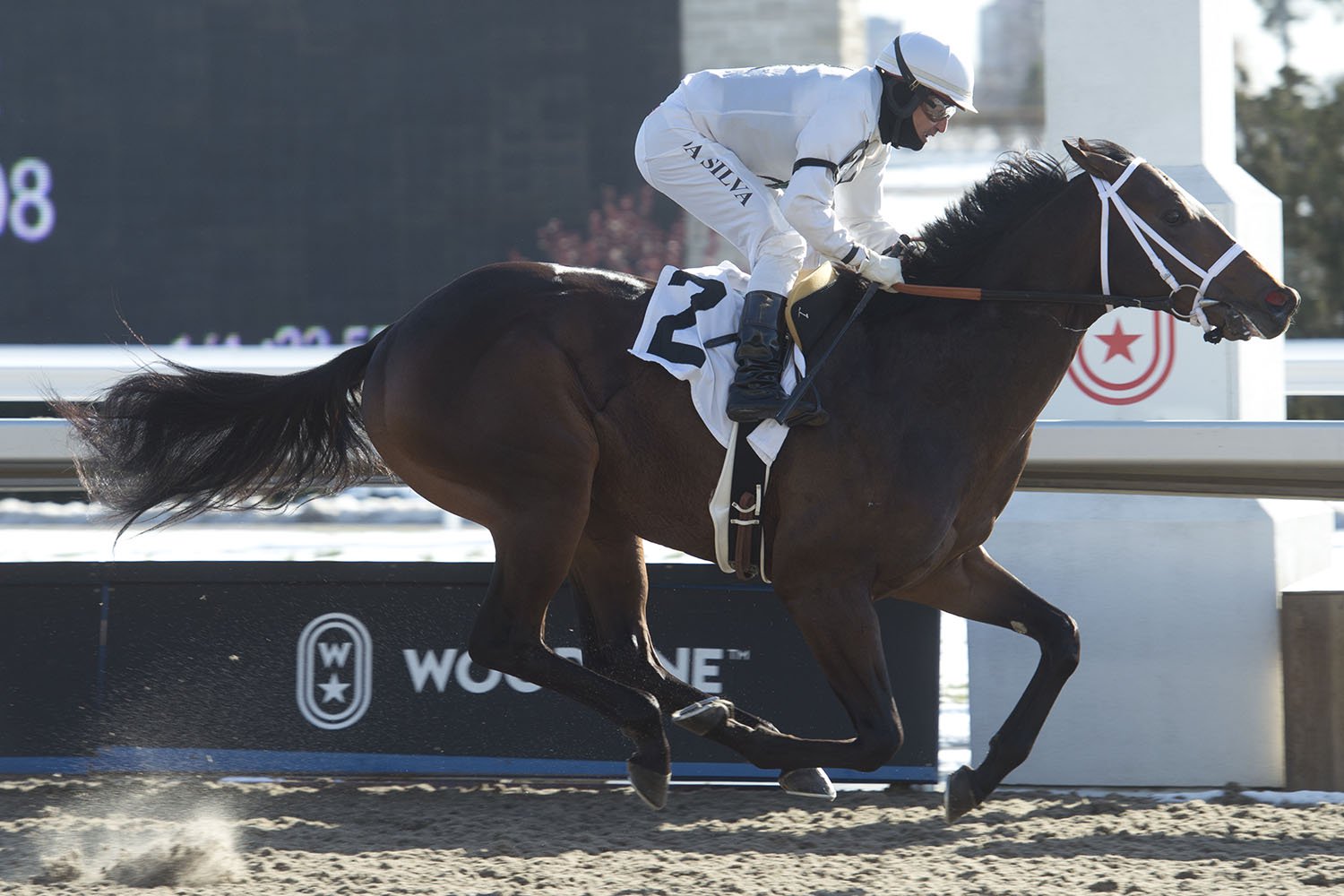 After the race, Clayton was given a break and shipped to Florida.

The plan was to keep the horse on track for a date in the Queen’s Plate this June.

When the race was moved to September, it meant a change in Attard’s game plan.

“Him being a Canadian-bred, you definitely have aspirations of being in the Plate. At that point, after his first race, you’re thinking about the race going in June. So, we started him back up in Ocala. Once he had couple of works there, we shipped him up to Gulfstream, and started preparing him for his sophomore campaign. Once everything happened with COVID-19, things were in limbo for a bit. We shipped him back up to Woodbine and our hands were tied with workouts for a bit. Once that was cleared up, we got back at it.”

On June 6, Clayton breezed four furlongs in :48.60, his fourth work at the Toronto oval since May 15.

“He’s come to hand really well, and I’m happy where’s he at,” said Attard. “Rafael [Hernandez] has been on him a couple of times, and now they’re acquainted with one another. He’ll be riding the horse.”

The conditioner is hoping to see Clayton bring the spirit he shows in the barn onto the racetrack once again.

“There’s a lot of work that goes into him before he loads in the gate. He’s not a horse that’s cut and dry. Anyone who works with him definitely earns their paycheque. Those horses, you put that time and effort in, you hope to see the results. And you like to see that competitive fire and spirit. I’m really excited to have him in the barn, and hopefully, he brings us to where we want to be in September.”

Clayton might not be the only one to take on that task.

Malibu Mambo was a debut winner over seven furlongs on Tapeta for Attard in August.

The Stronach Stables homebred stepped up to stakes company in his next engagement, finishing seventh in the Cup and Saucer Stakes on turf, before rebounding nicely in the Coronation Futurity (second) to close out his season in November.

“He just shipped in and he’s doing well,” Attard said of the son of multiple graded stakes winner Point of Entry, and the Queen’s Plate Winterbook favourite. “We haven’t had a chance to breeze him yet. We shipped him up from Florida… we had him at Gulfstream for a bit. When I came home, he stayed in south Florida for a little while. But I’m happy to see him here. It won’t be long until we see him.”

The bay daughter of Paynter, owned by Al and Bill Ulwelling, was vanned off in her career debut last July at Woodbine.

Merveilleux went on to record a win and three runner-up finishes in her four other starts as a two-year-old last season, including a neck defeat in the Princess Elizabeth Stakes and a head loss in the Ontario Lassie Stakes.

“She’s a really nice filly, one of the top Woodbine Oaks contenders right now, I would think. Who’s to say? The Oaks is her main target right now, but she could be a Plate prospect after that race.”

Trained by Stuart Simon, the dark bay filly finished third in her debut last September, a six-furlong turf tilt at Woodbine. She followed it up with a pair of wins, including a 13-1 upset in the Princess Elizabeth Stakes in October. 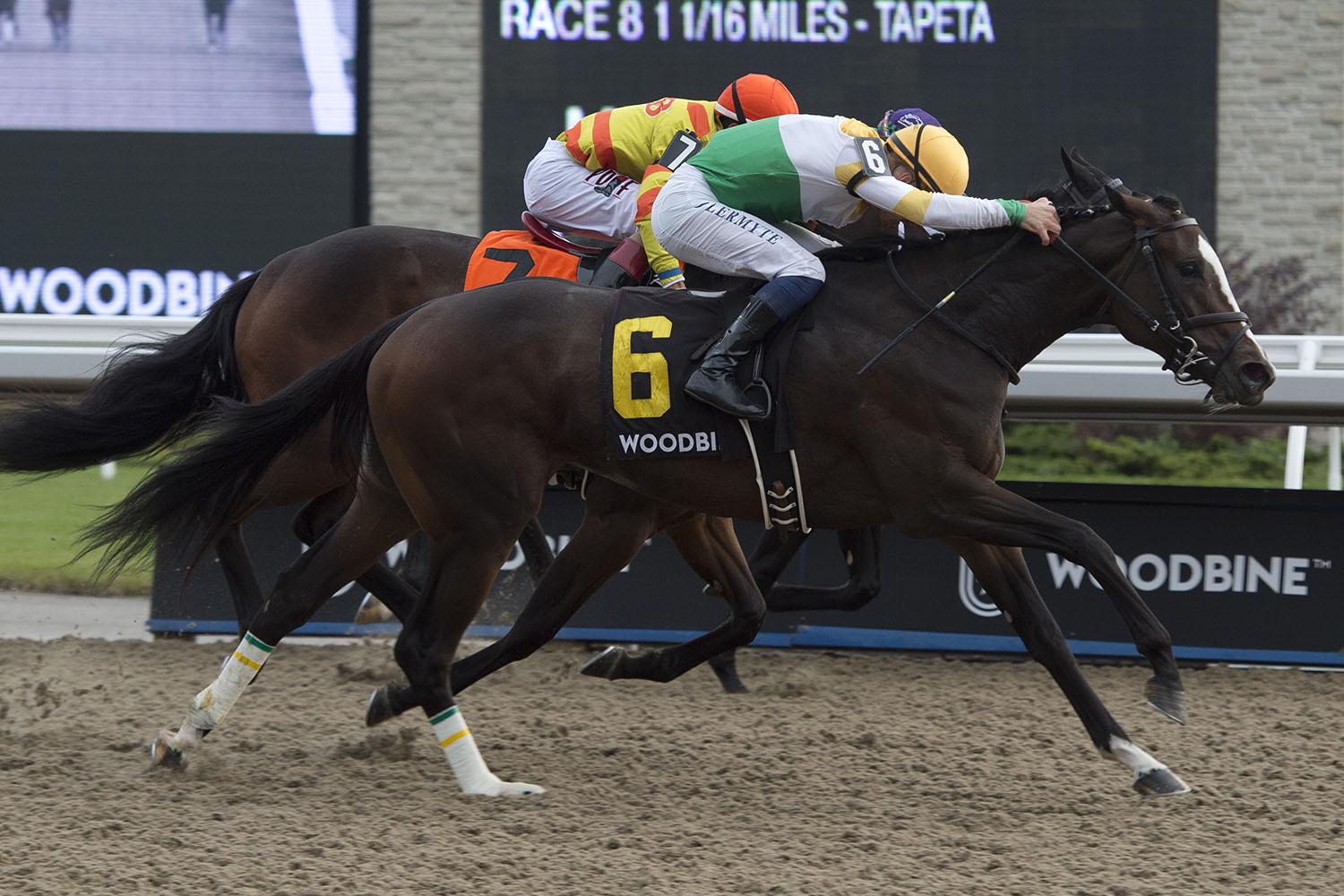 Simon is looking forward to seeing his budding star get her 2020 campaign underway.

“She’s doing really well,” said Simon, who won the 2019 running of the Star Shoot with Sister Peacock, a horse he co-owns with Brent and Russell McLellan. “We had her down in Palm Meadows [Florida] and we were planning on running in her Keeneland. With everything that had happened, we thought it might be better to get home, so we did that.

“It [Star Shoot] might be a tad short for her, but the long-term goal is the Oaks. She’s matured both mentally and physically. Even before she raced, she trained well, and had all the markings of a good filly. We’re happy with the way she’s coming along, and we’re expecting a good year.”

The 2020 Woodbine stakes program includes $13.8 million in purses across 75 stakes and features the Queen’s Plate and Grade 1 Ricoh Woodbine Mile (September 19) scheduled on back-to-back weekends for the first time in the racetrack’s history.

The Woodstock is slated as Race 7 and the Star Shoot goes as Race 8 on Saturday’s 11-race card. First post time is 1 p.m.

Fans can watch and wager on all the action via HPIbet.com.

*Horses nominated to the Queen’s Plate.

TORONTO, June 3, 2020 – TSN and Woodbine Entertainment announced today they are expanding their successful broadcast partnership to bring Canadians live horse racing every Thursday night throughout the summer with RACING NIGHT LIVE. The action begins Thursday, June 11 at 6 p.m. ET on TSN and features a mix of live Thoroughbred races from Woodbine Racetrack in Toronto and Standardbred races from Mohawk Park in Milton, Ont.

“We’re thrilled to partner with Woodbine Entertainment to bring Canadians exclusive access to live, weekly horse racing action,” said Shawn Redmond, Vice-President, TSN and Discovery. “Horse racing fans can enjoy live races throughout the summer in the lead-up to the great sports tradition that is the Canadian Triple Crown, airing live on TSN this fall.”

“It’s exciting to be one of the first live sports events to return to Canadian soil after a long and difficult shutdown for all of us,” said Jim Lawson, CEO, Woodbine Entertainment. “Working with TSN on RACING NIGHT LIVE will help to open up horse racing to a new generation of Canadian sport fans.”

The weekly broadcasts lead up to TSN’s broadcast of all three legs of the Canadian Triple Crown, including the 161st running of the Queen’s Plate, which has been rescheduled for September 12.