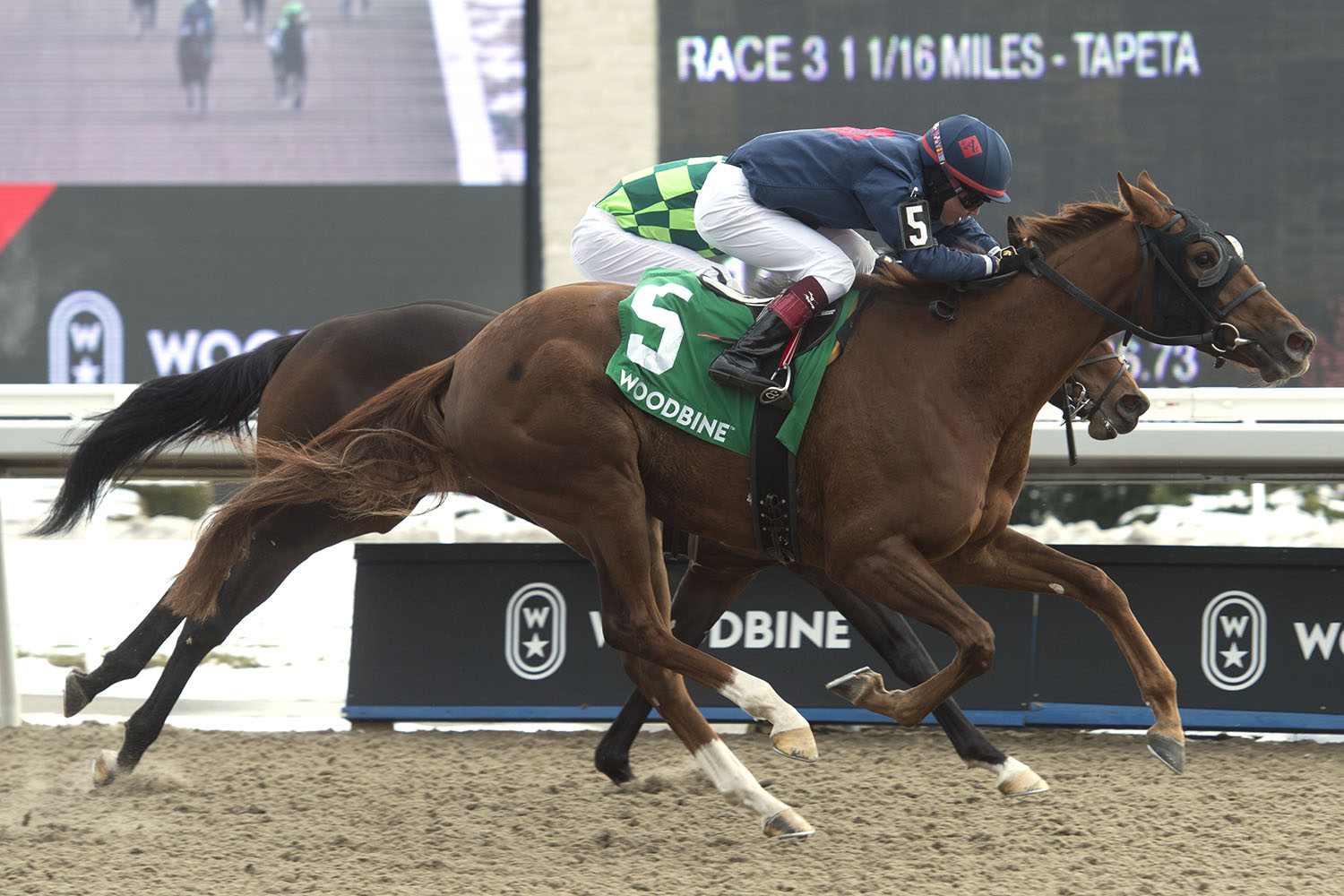 A daughter of Society’s Chairman, Gun Society arrives at the seven-furlong Fury (for Canadian-foaled three-year-old fillies), a key race on the road to the Woodbine Oaks presented by Budweiser (August 15), and possible date in the Queen’s Plate (September 12), off a half-length score in the South Ocean Stakes in November.

Bred, owned and trained by dual Hall of Fame inductee Roger Attfield, Gun Society is listed at 30-1 in the Queen’s Plate Winterbook.

“I wanted to have started before this race, but we had a little setback,” said Attfield, who also campaigned Society’s Chairman. “I need to get her started, so I was looking at this race anyway.”

After a pair of third-place efforts and a second – all on the Woodbine grass – Gun Society broke her maiden in the penultimate start of her rookie year. Under Kazushi Kimura, the chestnut eked out a nose win in a 1 1/16-mile race run on the Woodbine Inner Turf.

In the final start of her two-year-old campaign, Gun Society stepped up to the stakes ranks, and delivered a 7-1 upset in the main track South Ocean on November 16.

“I was a little bit surprised [at her odds],” offered Attfield. “She did seem like she was improving all the time. It was the perfect fit for her at that time in her life.”

Attfield was pleased with the development of his filly throughout 2019, including the ability to handle both turf and Tapeta.

“She has the pedigree to run long. She’s very closely related to the Kentucky Derby winner [Country House] from last year. I think she’s going to get better going longer. Seven furlongs, in the Fury, is the place to get her started. So, that’s where we are, really.”

Other contenders include Avie’s Samurai, a dark bay daughter of First Samurai. Bred and owned by Ivan Dalos, the Josie Carroll trainee fashions a mark of 2-1-2 from seven starts. Carroll also sends out Grade 3 Mazarine Stakes champ Curlin’s Voyage (6-1, third choice in the Queen’s Plate Winterbook), who finished second but was elevated to first in the 1 1/16-mile main track stakes last October. She was named Canada’s Champion Two-Year-Old Filly for her $265,000 juvenile campaign.

NHL star Ryan Nugent-Hopkins is the co-owner of undefeated filly Infinite Patience. Bred and co-owned by William DeCoursey, the decorated bay daughter of Sungold is a perfect five-for-five. Her last four victories have all come in stakes events at Hastings Racecourse in Vancouver.

The Fury represents her three-year-old debut.

“She’s very impressive and last year was so great,” Nugent-Hopkins told Woodbine. “I’m pretty lucky to have partnered with her breeder. It’s really been fun.”

The Fury is Race 9 on Sunday’s 11-race card. First post time is 1 p.m. Fans can watch and wager on all the action via HPIbet.com.

FIELD FOR THE FURY