TORONTO, July 4, 2020 – Leading jockey Rafael Hernandez swept the back-to-back stakes features as part of a five-win performance on Saturday at Woodbine Racetrack, with Halo Again a popular winner in $125,000 Queenston Stakes and Skywire pulling off a 17-1 upset in the $175,000 Eclipse (Grade 2).

Returning to the scene of his 2019 Coronation Futurity victory, Steve Asmussen trainee Halo Again delivered another winning performance on the road to The Queen’s Plate (September 12), prevailing in the 65th edition of the $125,000 Queenston Stakes on Saturday afternoon.

With Hernandez aboard in the seven-furlong sprint for Canadian-foaled three-year-olds, Halo Again pressed the pace three-wide through panels of :23.35 and :46.29 before eventually switching leads down the lane and drawing clear for the victory in 1:23.63.

Halo Again paid $4.70 to win as the 6-5 favourite. Golden Wave, who emerged along the rail with a short lead after the first quarter, stayed for second finishing 1-1/4 lengths behind, while Glorious Tribute headed See Forever for third another three lengths back. Dotted Line, Tecumseh’s War, Deviant, Perfect Revenge and Ennis the Menace competed the order of finish.

“The main thing was putting him in a good position,” said Hernandez, noting the colt has matured since his juvenile campaign.  “It was clear all the way. We’ve got a long backstretch. So he just broke good, kept him comfortable, clear and he did the rest. Turning for home, he switched leads. He’s a big horse, he’s got a nice heart, good stride. He’s does everything good.”

After going two-for-two last year for owners Winchell Thoroughbreds and Willis Horton Racing, Halo Again was assessed as the 8-1 fourth choice in the 2020 Queen’s Plate Winterbook. He opened his sophomore season in a pair of Grade 3 stakes events stateside, finishing eighth in the Lecomte in January and fourth in the Grade 3 Jeff Ruby Steaks last time out on March 14.

Bred by Anderson Farms Ont. Inc., the son of Speightstown and Halo’s Verse was a $600,000 yearling purchase at the Keeneland sale. He is a half-brother to 2017 Wonder Where Stakes champion Inflexibility (by Scat Daddy), who was a top three finisher in both the Woodbine Oaks and Queen’s Plate.

The most recent winner of both the Queenston Stakes and the Queen’s Plate in the same year was Not Bourbon in 2008 for Hall of Fame trainer Roger Attfield, who also campaigned Norcliffe — the last horse to complete the rare Coronation Futurity and Queen’s Plate double in 1976.

Skywire put Hernandez back in the stakes spotlight one race later as he hauled down the popular Josie Carroll trainees, Avie’s Flatter and Mr Ritz, to spring a 17-1 surprise in the $175,000 Eclipse Stakes (Grade 2).

The Mark Casse trainee, who was the beaten favourite in last year’s Queen’s Plate, earned his first win since taking the Wando Stakes in April 2019 for owners Gary Barber and Lou Tucci.

Racing near the back the entire way while tracking Avie’s Flatter along the rail, Skywire followed that foe wide turning for home in the 1-1/16-mile affair for older horses then hauled down the late leader in the stretch for the victory in 1:44.12.

The winner’s stablemate, Uncle Bull, had set fractions of :25.16, :48.32 and 1:12.17 to three-quarters with 3-5 favourite Mr Ritz pressing the pace and Avie’s Flatter stalking inside. Avie’s Flatter tipped out three-wide on the final turn and took command in the stretch before Skywire came flying late on the far outside to finish 1-1/4 lengths in front. Mr Ritz held third while Journeyman, Uncle Bull, Solidify and Cooler Mike rounded out the field.

Overlooked by the betting public at 17-1, Skywire returned $36.10 to his backers while notching his fourth career win from 10 starts.

“You can’t worry about [the odds] when you’ve got Casse in the race. He put him in there because he knows he belongs and he showed up,” said Hernandez, who noted the race set up perfectly as he was able to track Avie’s Flatter the whole way while two horses set a good pace on the lead. “As soon as I put him clear, he just turned on and kept going.” 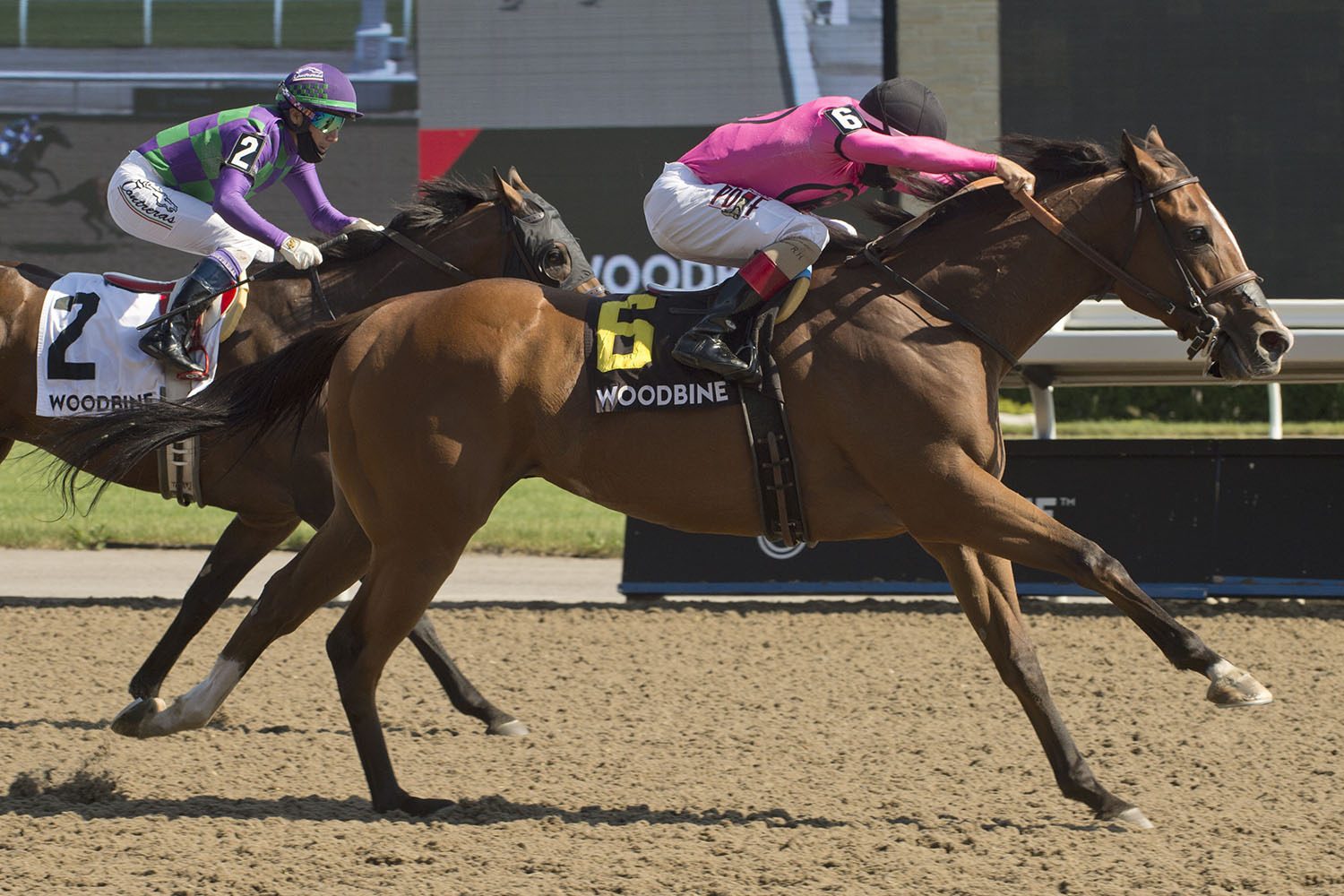 Bred in Ontario by William Graham, the four-year-old Afleet Alex-Meandering Stream gelding helped Casse to successive scores in the Eclipse. Casse won this race in 2019 with Souper Tapit. He also trained the 2006 winner Arch Hall.

Hernandez, who concluded the 10-race card with five wins, picked up his second Eclipse title having also guided the Attfield-trained Are You Kidding Me to victory in the 2018 edition.

Live Thoroughbred racing continues, without spectators, on Sunday afternoon with a star-studded Fury Stakes for three-year-old Canadian-foaled fillies headlining the 11-race card. Post time for the first race is 1 p.m., with the $125,000 seven-furlong stakes feature scheduled as the ninth race.