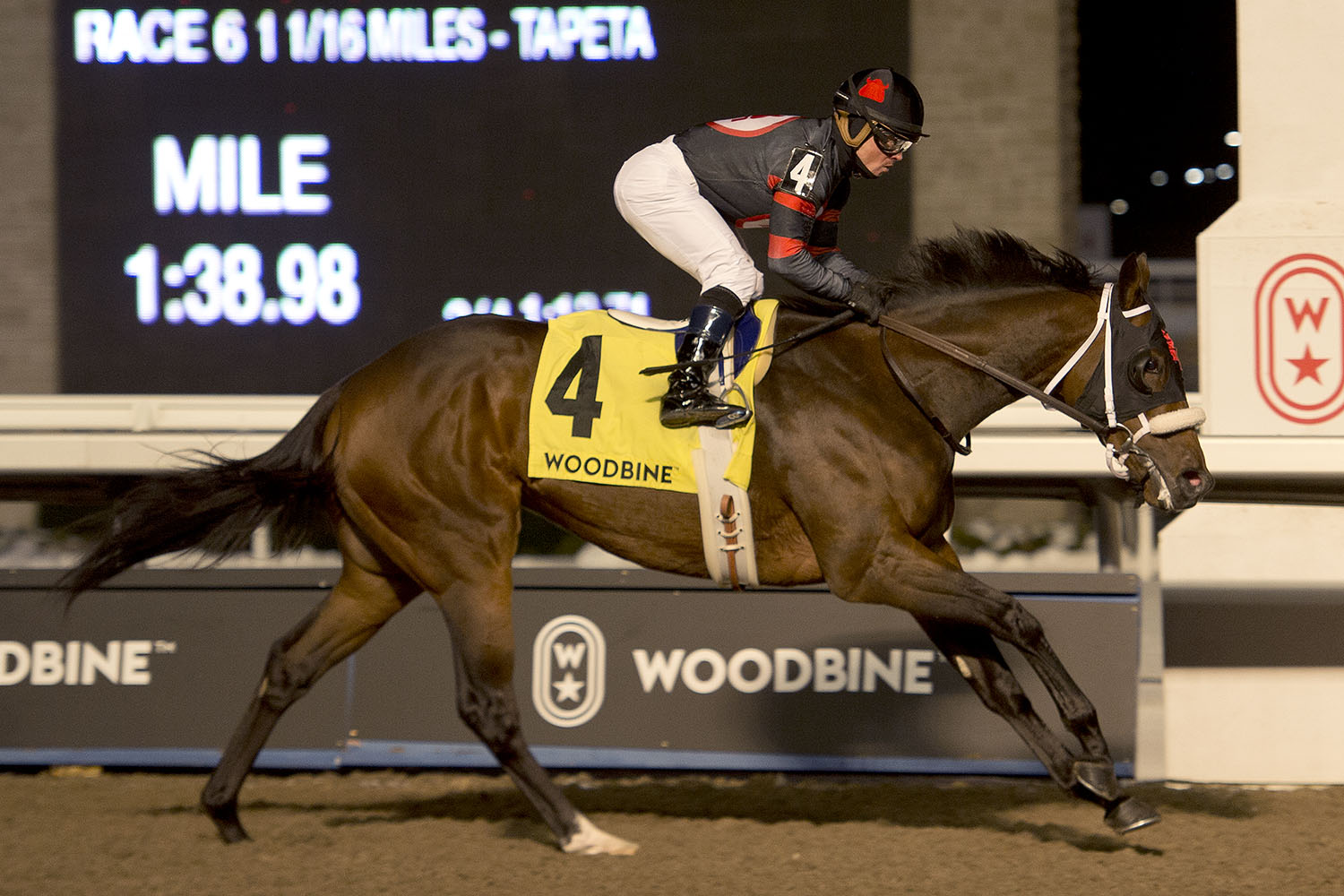 Nine horses will contest the seven-furlong Queenston, a main track stakes for three-year-olds foaled in Canada. The 65th edition of the race serves as an important prep for the Queen’s Plate, slated for September 12 at Woodbine.

The now three-year-old gelded son of Signature Red closed the book on his first season at the races with back-to-back stakes wins, taking the Frost King by a neck, at 49-1, in November, and the Kingarvie, as the 3-5 choice, in December.

“He’s a very nice horse,” said Attard, of the horse listed as the 18-1 ninth choice in the 2020 Queen’s Plate Winterbook. “He’s a big, strong horse, and we liked him right from the start.”

Justin Stein once again gets the call.

“He has the right attitude, the drive to win and compete,” said Stein, who was aboard for the Frost King and Kingarvie wins. “When I ride him, he feels like he knows he is the best and he’s ready to prove it.”

The son of Speightstown, trained by Steve Asmussen, and bred by David Anderson, won his first two starts, including the 2019 running of the Coronation Futurity.

The Eclipse, run at 1 1/16 miles on the Toronto oval Tapeta, has attracted seven hopefuls for the 65th running of the stakes for four-year-olds and up.

Bred and owned by father and son duo Mike and Nick Nosowenko, the gelding is one of the most consistent competitors on the Woodbine grounds, having assembled a 6-4-5 record from 21 career starts.

Three of those wins – all stakes – came last year, a campaign that saw the Ontario-bred win the Halton, Bunty Lawless, and Sir Barton Stakes.

“When you win three stakes with an Ontario horse, I think it’s a pretty good highlight,” said Nick Nosowenko, who also trains. “Then he lost that close one in the Steady Growth, which was another big effort. He’s come around to be a very good horse. He’s very sound now, and that’s the best thing going into a race like this.”

He arrives at the Eclipse off a fifth-place finish in his 2020 debut, a 7-1/2-furlong Inner Turf race at the Toronto oval on June 11.

“He’s doing great,” said Nick Nosowenko. “That last race, there was nowhere else to go. I was kind of leery about going on the Inner Turf with the tight turns, but he ran pretty well. He looked like he was going to do something turning for home, but they just sprinted off on him. He galloped out strong and in front. He wasn’t his happy self for the last little while, but after his work [five furlongs in :59-flat, breezing, on the Woodbine main track, on June 27], he started to have that bounce in his step again. I think he’ll run a big one on Saturday.” 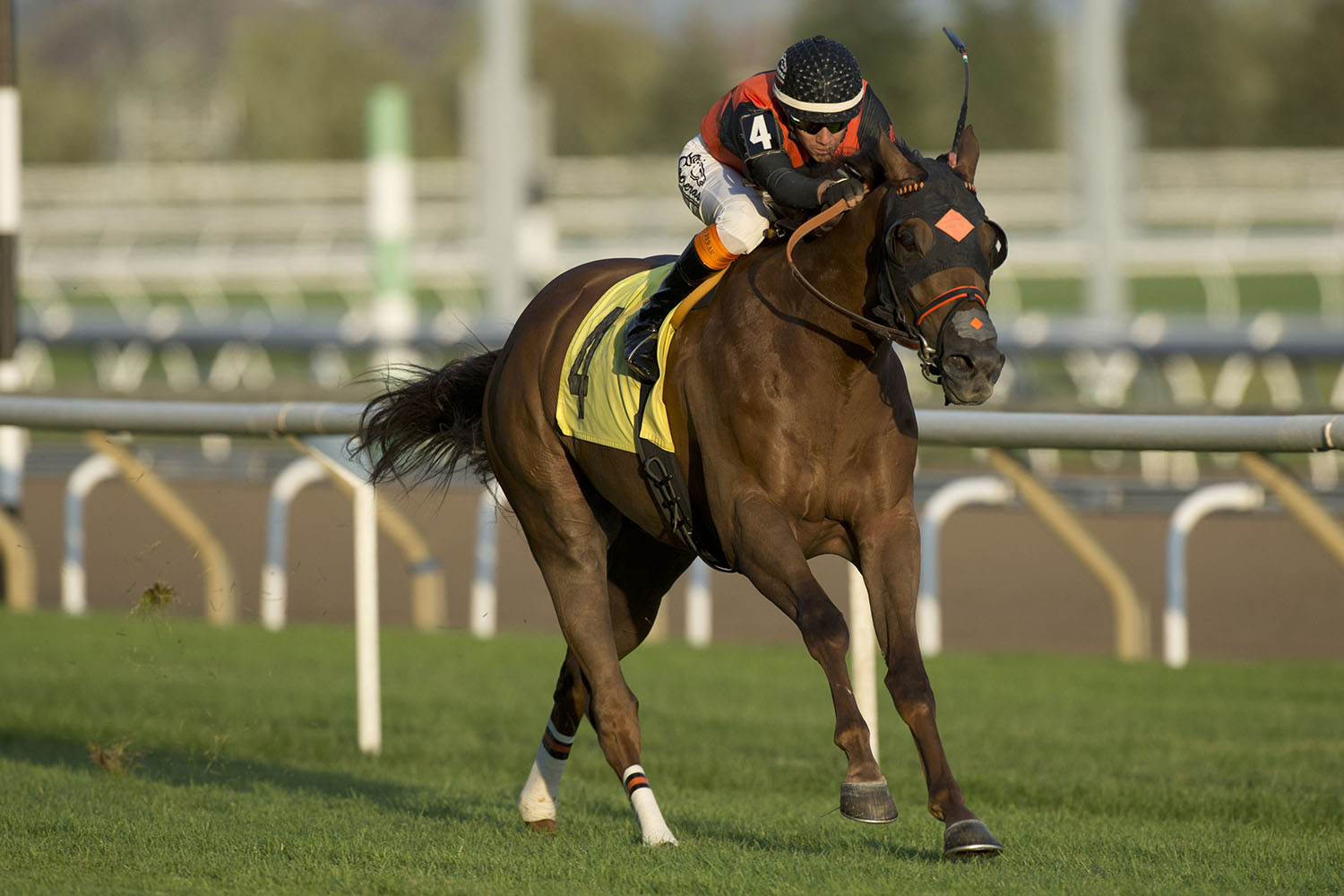 “I think he’s got a cool name, and he’s built up a good following. I think people enjoy seeing him run like he does. He’s won on different courses, and he’s won at a mile-and-a-half, and come back to win at a mile-and-a-sixteenth. That’s quite an adjustment for any horse, and he’s done that. He’s thriving right now. He’s just a cool horse. He’s the laid-back guy in the barn. Put him on the track and then he’s a beast.”

A four-year-old son of Flatter, Avie’s Flatter has compiled a 4-2-2 mark from 11 starts for owner-breeder Ivan Dalos.

The Ontario-bred chestnut launched his 2019 campaign with a smart score in the Grade 3 Transylvania Stakes last April at Keeneland.

He contested all of last year’s Canadian Triple Crown races, finishing second in both the Queen’s Plate and Prince of Wales, and third in the Breeders’ Stakes.

In his most recent effort, Avie’s Flatter was third, a half-length out of top spot, in a 7-1/2-furlong Inner Turf race at Woodbine on June 11.

“He had a good winter, but was set to run in the spring,” said Carroll, who was inducted into the Canadian Horse Racing Hall of Fame in 2019. “We didn’t get that opportunity and it was a little difficult to keep him focused and waiting. We got a nice race into him now, and I think that’s going to propel him forward. He always shows up. We’re taking a step forward, running with older horses this year – it’s a different game.”

Earle Mack’s five-year-old Mr Ritz went 2-2-0 from five engagements last year, a season highlighted by a 1 ¼-length victory in the Grade 3 Seagram Cup Stakes, in August, followed by another 1 ¼-mile triumph one month later, in the Presque Isle Mile.

The British-bred son of Oasis Dream just missed winning last year’s edition of the Eclipse, finishing a nose back of Souper Tapit.

“I think he had a tremendous season last year,” praised Carroll. “We gave him the whole winter off, and freshened him up. We really had targeted a mid-summer start anyway, so everything’s fallen into place properly for him. He was just impressive all of last year. Every time you send him out to do something, he just goes out and gets the job done. He matured a lot last year. It took him a while to settle into things, and he’s just really grown up. He’s turned into a pretty special horse.”

Carroll is confident in both her charges.

“I think they’re both live horses. They’re two consistent, live horses, that show up every time you lead them over.”

Last year, Mark Casse trainee Federal Law paid $9.70 to win the Queenston as the 7-2 third choice on the toteboard.

On Saturday, Casse sends out Deviant in the Queenston as well as Eclipse contenders Uncle Bull and Skywire.

The Queenston is carded as race seven on Saturday’s 10-race program. The Eclipse goes as a race eight. First post is 1 p.m. Fans can watch and wager on all the action through HPIBet.com.

FIELD FOR THE QUEENSTON

FIELD FOR THE ECLIPSE