MILTON, September 27, 2019 – In the toughest moments she’s faced, Kim MacDonald knows she can depend on the kindness of friends and strangers alike to help pull her through.

After she agreed to be part of the Breeders Crown Charity Challenge, a unique fundraiser that unites celebrities, horse racing, horses, social media, and worthy causes, MacDonald, a longtime on-air personality with The Weather Network, didn’t hesitate for a moment in choosing the Breast Cancer Society of Canada as her charity of choice.

It was, admittedly, one of the easiest decisions she’s ever had to make.

Three and half years ago, on December 1, 2016, MacDonald was told she had breast cancer.

The tumor, 10 centimetres in length, required immediate treatment. MacDonald endured eight rounds of chemotherapy over four months. In May 2017, she underwent a double mastectomy. Two months later, she began 25 rounds of radiation. She was also diagnosed as HER2+, which required a year of Herceptin infusions.

MacDonald had a full response to the chemotherapy, a rarity, she was told by her doctors. There were no traces of cancer found during post-op testing and her lymph nodes had not been affected.

At the start of it all, MacDonald decided to share her diagnosis and subsequent treatment. She started her own blog (kmacblog.com), launched a weekly radio show, and openly responded to every question she was asked. She also had her hair shaved live on Facebook, hoping those who watched could gain a measure of understanding of what it’s like to face breast cancer head-on.

The response to her story continues to be a source of strength for MacDonald.

“It’s amazing to inspire those who are going through it, and it’s amazing to get the support from people who just care about my well being,” she said. “It’s especially nice because a lot of these people don’t know me. They really got me through a lot of times. When I was going through my treatment, I would get so many messages. But I feel like the ones who really got to me were the people who would say, ‘I was just diagnosed,’ or ‘I have to shave my head.’ Those messages, ones that would say, ‘Because of you, I’m not afraid’ – I felt that me being so vocal about it was actually helping others, and helping me at the same time. It turned out okay. Here I am.”

Where she is, MacDonald said with a smile, is in a much better place than she was nearly four years ago.

She’s grateful for the well-wishes, cards, kind words, and messages of hope.

“I always had flowers. As soon as my flowers were wilting, I’d get another delivery. Or I would get a card in the mail. Things like that… people might view that as no big deal, but it was such a big deal to me. The smallest gesture was extremely meaningful. I really think it was all of those people who helped me get through. I have a lot of good people in my life. The world is a much nicer place than I thought it was. Physically and mentally, I’m just getting better all the time. I’m in complete remission right now. I’m hoping to stay that way.”

MacDonald, who lost her father and mother-in-law to cancer, is also hoping to shine the light on the Breast Cancer Society of Canada through the Breeders Crown Charity Challenge.

The challenge, ahead of one of Standardbred racing’s highest profile events, on October 25-26, at Woodbine Mohawk Park, features four teams consisting of a celebrity, a charity of their choosing and an award-winning three-year-old Standardbred. 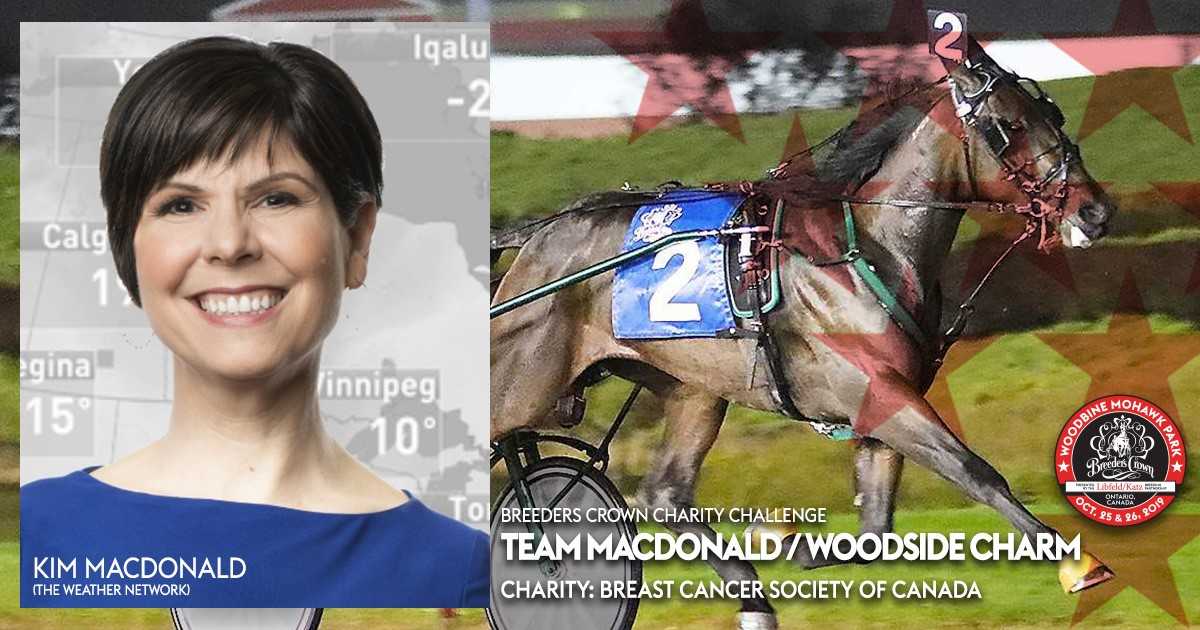 The connections of Dan Patch Award winners Woodside Charm (MacDonald), Captain Crunch (Plesac), Gimpanzee (Olczyk), and Warrawee Ubeaut (Clemons) have pledged one per cent of their earnings from June 1, 2019 to October 26, 2019 to go towards the charity of their celebrity. Each is guaranteed to receive a minimum of $5,000.

Through donations from industry participants, Libfeld-Katz Breeding Partnership has secured a series of stallion shares that will be auctioned off at this October’s Lexington Selected Yearling Sale. The proceeds (estimated at $100,000) will be donated to the winning celebrity’s charity.

The challenge portion of the initiative has the teams competing to get the most votes in a Facebook poll, which closes on October 26, 2019. The team with the most votes will receive a significant donation from the funds raised by the breeding auction.

The funds raised for the Breeders Crown Charity Challenge are anticipated to eclipse the six-figure mark, which would represent the single largest donation by Woodbine Cares.

“I’ve had it all over Facebook and Twitter, and the Breast Cancer Society has been tweeting it out and putting it all over Facebook, too,” said MacDonald. “People are voting every day, and they get excited when my number ticks up. I get messages from fans, which is great. People have always been great to me… they feel like they know me personally.”

One of the most passionate advocates for breast cancer awareness and research remains dedicated to making a difference in the lives of others.

“I’m doing a six-month program with another foundation called “I Rise Above.” It’s for women who have gone through breast cancer, to get them to a better place after the fact. Once it’s all over, you feel a little bit lost, even though you are better. It’s a long journey to being well, even after the fact.”

A journey that MacDonald will never walk alone.