A decade later: “The Beach” goes for another Metro

​CAMPBELLVILLE, September 21 – Arguably the greatest pacer of all-time, Somebeachsomewhere made his first major impact when he won the 2007 Metro Pace in a World Record time of 1:49.3.

Now a decade later, “The Beach” is poised to once again capture another Metro Pace.

Pedro Hanover and Stay Hungry, both impressive elimination winners last week, are the two favourites in this Saturday’s $816,000 Metro and both are sired by Somebeachsomewhere.

With now his sixth crop on the track, Somebeachsomewhere is seeking his second Metro title as a sire. From his first crop, Captaintreacherous captured the 2012 edition to solidify “The Beach” as not only a great racehorse, but also a top sire.

The Metro Pace has been the launching pad to greatness for many top performers over the years and the 2007 edition is arguably where “Beach-Mania” began.

The son of Mach Three was a gate-to-wire winner and absolutely demolished his opponents. Driver Paul MacDonell fired “The Beach” out from post-four and then left everyone behind, posting fractions of :26.3, :54.2, 1:21.4 and 1:49.3.

The legend of “The Beach” only grew from that point on and the numbers he posted during his racing career were incredible. An almost perfect 20 wins in 21 starts, $3.3 million earned and a mark of 1:46.4.

His stallion career started off hot when Captaintreacherous (pictured) made a splash in 2012 and one upped his father by winning the Metro in 1:49.2.

“The Captain” is the richest son of “The Beach” with $3.1 million earned during his racing career and now this fall his first crop are selling at the yearling sales adding to the legacy.

Following his hot start as a stallion in 2012, it wouldn’t have been a surprise to see Somebeachsomewhere quickly sire another Metro winner, but that hasn’t been the case. 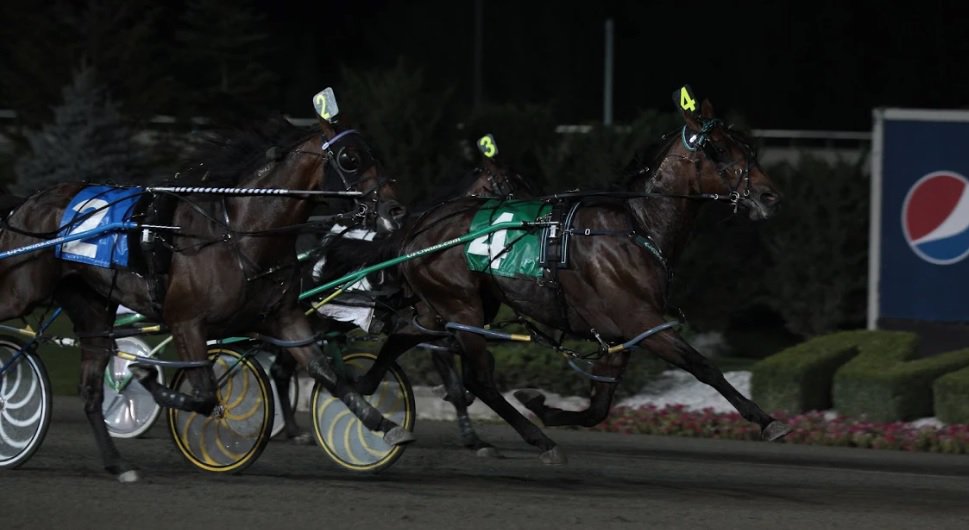 Somebeachsomewhere (Metro starters as a Sire)

Just six sons of “The Beach” have raced in the last four Metro’s, with the best finish a fifth-place effort from Ocean Colony in last year’s edition.

But after last week’s eliminations, it appears Somebeachsomewhere is set to make another splash in the Metro Pace with a pair of talented colts, Pedro Hanover and Stay Hungry.

An $80,000 yearling purchase at Harrisburg, Pedro Hanover comes into the Metro Pace on a four-race win streak for trainer Andrew Harris. The bay colt stormed home in a flashy :26.2 to win his elimination in 1:51.2 and has wowed not only fans with his speed, but also his connections.

“He can really fly,” driver Andrew McCarthy said when talking about Pedro Hanover’s Metro elimination victory. “As long as I’m handy enough at the head of the stretch, I know he’s going to kick home in :26 or change.”

“He’s just got one of the biggest burst of speed I’ve ever seen,” trainer Harris stated after “Pedro” won the Nassagaweya on August 26. “His turn of foot is amazing.”

Pedro Hanover enters the Metro Pace as the 5/2 morning-line choice and will start from post-four.

It is no surprise to see a talented son of “The Beach” have a ton of speed like Pedro Hanover, just like it is no surprise that another one of his talented offspring posses plenty of determination like Stay Hungry.

A $150,000 purchase at last fall’s Lexington Selected Yearling Sale, Stay Hungry is a perfect three for three heading into the Metro Final for trainer Tony Alagna and driver Doug McNair.

Stay Hungry started his career with an easy-victory in a $14,000 event on August 25 at Mohawk, but has since followed that up with a pair of hardworking efforts to add two more victories to his record.

The Alagna trainee came first up to win the Champlain on September 2 and then prevailed a three-horse stretch duel, when coming from third-over, to win his Metro elimination.

“This is where you aim for at the start of the season and he’s going into the Metro final in pretty good shape,” McNair said about Stay Hungry. “He dropped two more seconds from his previous mark and he did it pretty handy again…he’s a pretty nice colt.”

If Stay Hungry can capture Saturday’s rich final, trainer Alagna will have conditioned both of Somebeachsomewhere’s Metro winners. The bay colt will start from post-two.

While all eyes will be on Pedro Hanover and Stay Hungry, “The Beach” will have one other representative in Hayden Hanover for trainer Julie Miller.

Post-ten will be tough to overcome for “Hayden”, but the bay colt showed tremendous heart battling for third in his elimination, just three-quarters of a length behind Stay Hungry.

It is very likely that harness racing’s next pacing star will emerge from Saturday’s $816,000 Metro Pace and 10 years after Somebeachsomewhere captured the prestigious event, it would only seem fitting that one of his sons follow suit and latch onto that rocket to the top.