A “Sunday stroll” was the words used by driver Yannick Gingras to describe Hannelore Hanover’s easy 1:52.2 victory in the first Armbro Flight elimination for trotting mares.

The Ron Burke trained five-year-old got away third in a field of seven and made a second-quarter move to command for Gingras. ‘Hannelore’ reached the half in :56 and three-quarter pole in 1:24.4 to lead the group of mares into the lane.

The stretch drive was a walk in the park, as Hannelore Hanover cruised home in :27.3 and pulled away from her rivals to win by 2 ¾ lengths.

Emoticon Hanover, who was the early leader, finished second, while Renegade Magic took third spot. Ready Any Time and Kestrel rounded out the top-five to advance to next week’s final.

No Show wagering was available on the first Armbro Flight elimination, but that didn’t matter to the “bridge jumpers”, who wagered $104,863 to Place on Hannelore Hanover.

The daughter of Swan For All now has two wins in three starts this season, with both her 2017 victories coming at Mohawk.

“Last week when she raced here, she was really good and she was even better tonight,” said Gingras post-race. “She’s back to her old self and it was a Sunday stroll.”

The second elimination featured a battle between last year’s sophomore champions Broadway Donna and Caprice Hill. However, Charmed Life stole the show picking both mares off to win in 1:53.1. 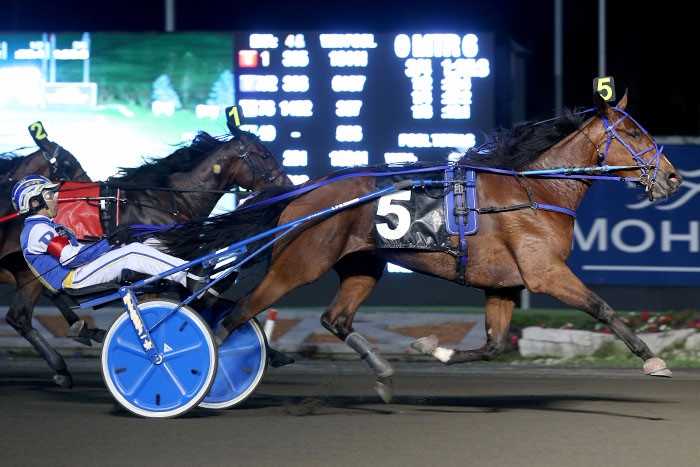 Caprice Hill was able to get away with relatively easy fractions of :27.2, :56.4 and 1:25.3, as she led the field through the opening three-quarters of a mile. Broadway Donna came first up from third on the final turn to set up a stretch sprint, while Charmed Life got a perfect two-hole trip.

In the stretch, Broadway Donna was able to edge by Caprice Hill with less than an eighth of a mile to go, but she couldn’t fend off the charging Charmed Life, who was angled to the far outside by driver Louis Philippe Roy and powered by to win by a length.

Flowers N Songs finished fourth, while Majestic Presence was fifth to advance to the final.

Trained by Rene Allard, Charmed Life won three of her first four starts this season, but was winless in her last two coming into Friday. Young reinsman Roy had never driven the winner of over $1.2 million before and admitted it was a big moment for him.

“I talked with Rene before the race and he said she might be a little nervous so try and keep her calm during post parade,” Roy shared. “But I think it was me that was more nervous than her because I didn’t know her at all and driving her for the first time in elims of a big race like that.”

Hannelore Hanover and Charmed Life each earned the right to select their posts for next week’s $253,000 final.

The Goodtimes eliminations featured a field of nine and a field of eight sophomore trotting colts and geldings vying for a spot in next week’s final. 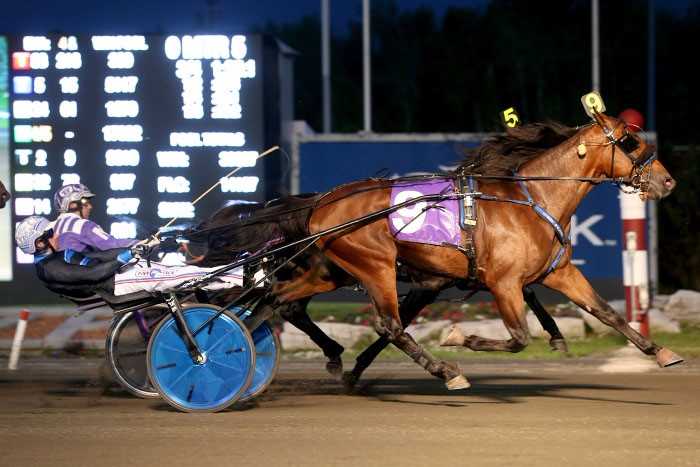 International Moni’s upset victory in the first elimination created plenty of buzz throughout the sport. The Frank Antonacci trainee was able to come from last to win at 14-1 for driver Scott Zeron in 1:54, but it was the driving outfit that Zeron wore that garnered most of the attention.

Zeron wore what appeared to be a skin-tight shirt replicating the Lindy Farms colours. The colours, which were designed by a company named Speed Silks of Amarillo, Texas, are made of a fabric engineered to reduce aerodynamic drag.

“The Antonacci’s own a lot of thoroughbreds and they like that the jockeys wear their colours,” said Zeron. “They feel it represents the owners and trainers and they wanted me to try it and you know I don’t say no to anything new and they were nice enough to let me do it here.

“(Antonacci) wants to be aerodynamic, he wants everything skin tight almost like a luge. You want every advantage you can have and we ended up coming from last to first to win it by a nose so maybe he was right.”

International Moni is a son of French Stallion Love You out of the great mare Moni Maker and is owned by Moni Maker Stables. Friday’s start was the first of his three-year-old season.

The Antonacci trainee had one win in 12 starts last season, but did hit the board eight-times and earned $191,763.

International Moni sat ninth for the first half before moving up to eighth and eight lengths from the lead turning for home. The Love You colt was able to trot by on the far outside, as none of his rivals were able to deliver a solid stretch kick.

Guardian Angel As, who grabbed the lead at the half, finished second, while Jake, who led at the opening-quarter was third. Seven And Seven, who won last year’s Wellwood Memorial, was fourth in his season debut, while Southwind Woody was fifth.

The second elimination had no drama, as undefeated colt Enterprise was a gate-to-wire winner in a career-best 1:53.1. 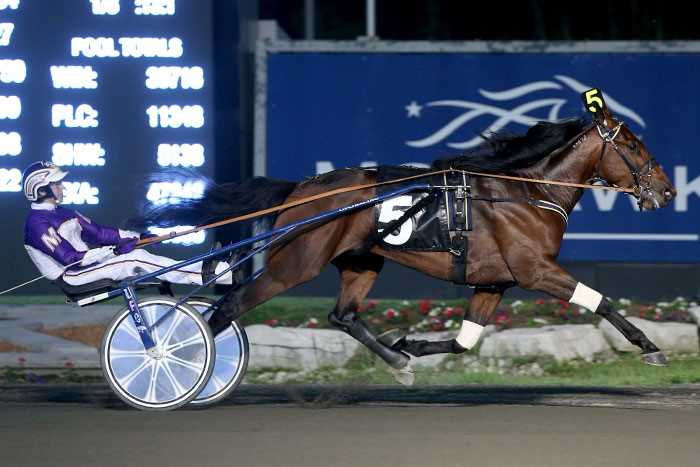 David Miller picked up the late catch-drive behind Enterprise and just had to point the Marcus Melander trainee in the right direction. The son of Chapter Seven colt posted fractions of :27.4, :56.4 and 1:25.1, before trotting home in :28 for a two-length victory.

Owned by Courant Inc, Enterprise, who won his only start as a rookie, is now a perfect five for five and has banked $52,450.

Awol Hanover finished second, while Shake It Off Lindy was third. Mass Production and Southwind Cobra completed the top-five to advance to next week’s $251,000 final.

Following Friday’s eliminations, the post positions were drawn for both finals and the full fields can be viewed below. The Armbro Flight and Goodtimes finals are part of the stacked Pepsi North America Cup card on Saturday, June 17.

Live racing continues Saturday night at Mohawk with the eliminations of the Pepsi North America Cup, Fan Hanover and Roses Are Red on deck. Post time is 7:30 p.m.

1. Shake It Off Lindy