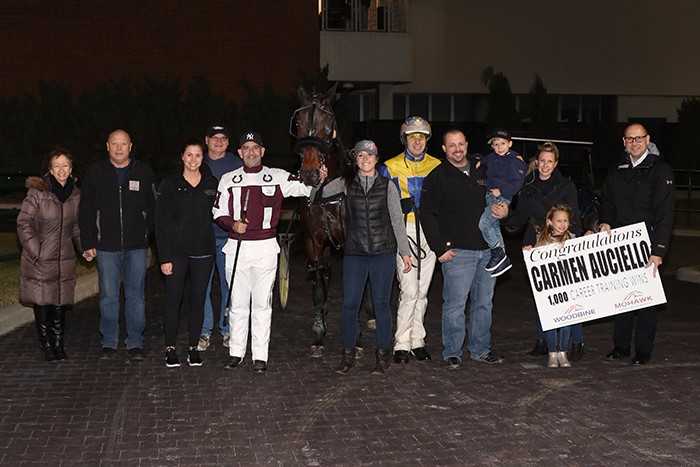 TORONTO, November 14 – Carmen Auciello has been racking up victories and making an impact on the Woodbine trainer standings for many seasons and Friday night at the Toronto oval he reached a career milestone.

The 37-year-old trainer from Stouffville, Ontario came into the night just a win shy of the milestone. Driver Jonathan Drury steered Sodwana Bay to the victory to give Auciello the milestone victory.

Auciello recorded his first-training victory in 2005 and has gone on to send out the winners of over $14 million. He is currently in the midst of his sixth-consecutive 100-plus win and $1 million season.

A special presentation from Woodbine Entertainment was made to Auciello following Sodwana Bay’s sixth-race victory.

Friday evening’s card also featured one of the top pacing mares in the sport competing.

It may comes as a surprise, but L A Delight, a winner of over $1.5 million, was winless this season coming into Friday’s action at Woodbine.

The losing streak came to end Friday, as the Bob McIntosh trained four-year-old pacing mare scored a decisive six and a half length victory in a $25,000 overnight event.

A champion at both two and three, L A Delight has been dealing with the typical struggles any four-year-old will face when moving up to face the top older horses.

Despite not getting into the winner’s circle until Friday, the daughter of Camluck had been holding her own in her division’s biggest races, including posting a runner-up finish in September’s Milton Stakes.

Trainer McIntosh handed the lines to driver Trevor Henry for the first-time Friday and L A Delight was blasted to the front by her new reinsman. The four-year-old cut out fractions of :26.2, :56 and 1:23.3, before kicking home in :27.3 for the 1:51.1 victory.

Friday’s start was the 13th outing of the season for L A Delight and her 21st victory overall for owners Robert McIntosh Stables Inc, C S X Stables and Al McIntosh Holdings Inc.