Grant grateful to be part of Breeders Crown Charity Challenge

Brad Grant had his answer ready before the question was finished being asked.

His contributions to standardbred racing are rivalled by his philanthropic ways, a highly successful horseman who continually gives back to his own community and well beyond.

So, when Grant was asked if he’d like to be part of a charitable initiative leading up to this year’s Breeders Crown, on October 28-29 at Woodbine Mohawk Park, his response came quickly and in the form of one word.

“[Owner-breeders] Marvin Katz and Al Libfeld have done so much over the years to raise funds for so many different causes. When Marvin asked me if I’d be interested in being part of this, it took me about three seconds before I said, ‘Absolutely.’ It’s a great opportunity and a great honour to be a part of such a worthy event.”

Established in 2019 at Woodbine Mohawk Park, the Breeders Crown Charity Challenge (BCCC) has raised over $800,000 for local charities of each year’s Breeders Crown host track.

The format for this year’s BCCC showcases four teams, with each entry comprised of a prominent owner, their charity of choice, and a Woodbine leading driver, competing to net the largest donation amount from a minimum pool of $200,000.

“We are all horse people and business people, and we all want to support the needs of others, those who are facing challenges,” said Grant. “And to have it around such a first-class racing event, that makes this more special. The last time we had the race here, it was outstanding. It’s the best of the best. Everyone wants to win a Breeders Crown, and this is a chance for people to get to see some of the greatest horse in the world right here. To have the charity element to it just makes it that much more special.”

Each team has already pledged $25,000, which guarantees their charity of choice a minimum donation in that amount. An additional $100,000 has been raised through donations made by industry participants.

Supporters are asked to go on Twitter and use the hashtag of their favorite team and include #CrownCharity22. Team Brad Grant/Doug McNair’s hashtag is #GrantUsVictory

“Being part of this charity event is very special,” said McNair. “And to be able to team up with Brad, someone who is not only a great owner, but also a great person, is extra special. I know how

important the Milton hospital is to Brad and his wife, so whatever I can do to raise money and awareness for the great work they do, I’m happy to help.”

Grant’s charity of choice is a place he has a deep affinity for and close association with.

In order to ensure that Milton District Hospital continues to be a state-of-the-art healthcare facility, MDHF raises funds for essential medical equipment and technology required by healthcare providers to diagnose, treat and care for patients living in its community. All donations made to MDHF remain in Milton.

“I’ve been on the hospital board for about 14 years,” noted Grant. “I was Chairman then past Chairman and I’m a Vice-Chairman again. Giving back to the hospital is important to us. My wife and I are very big supporters of healthcare in our community. Every opportunity I get to do something for the hospital is special.”

One of horse racing’s most accomplished owners is certainly no stranger to giving back.

In 2018, when 16 people aboard a bus carrying the Humboldt Broncos junior hockey team, were killed, Grant, whose involvement in Canadian junior hockey covers more than three decades, immediately stepped up to help.

Through a pacer named Humboldt he had purchased, he donated earnings to the Saskatchewan Junior Hockey League Assistance Program, created to raise funds for everyone affected by the tragedy.

The man who has owned and owns some of the greatest names in the sport, a list that includes champions and multiple stakes winners Atlanta, Bulldog Hanover, Apprentice Hanover, Stay Hungry, Sandbetweenurtoes and Ramona Hill, has never taken any of those successes for granted.

He’ll have an opportunity to add to his long list of accomplishments this Saturday at Woodbine Mohawk Park.

After making a deal for the winning Mohawk Million starting spot for the first two years of the unique buy-in harness race, Grant purchased one of the nine $100,000 slots available for the 2-year-old trotting event.

His hopes this time rest on the hooves of Proud To Be Lindy, a daughter of Muscle Hill-Lindys Lullaby.

Win or lose, Grant will remain committed to the sport he loves and to helping others.

The Breeders Crown Charity Challenge is a perfect example of that.

“I’ve learned to appreciate it [winning races] very, very much. Watching the young ones develop and seeing people I know in the industry have success, it’s special. I very seldom go into a race thinking I’m going to win it, but I certainly hope I do. I’m finding as I get older that you never know when you’ll have that next good one, so you really do learn to appreciate the moment.” 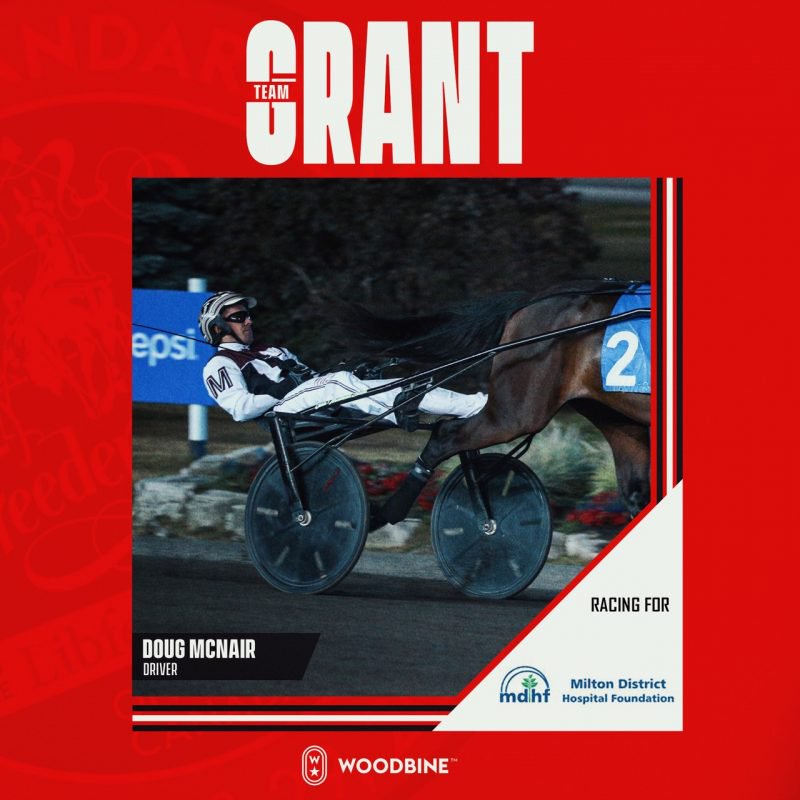