Hall of Fame trotter Kadabra was a proud father Thursday night, as his fillies swept the three Champlain divisions.

There has been plenty of hype surrounding trotting filly Caprice Hill and the Tony Alagna trainee lived up to that hype once again in the $87,960 final division.

Driven by Yannick Gingras, Caprice Hill trotted well off the gate to grab the front heading into the first turn. The daughter of Kadabra went unchallenged through the opening-half, posting fractions of :28.3 and :58.4.

Around the final turn, Caprice Hill began to extend her lead and was on top by four lengths at the three-quarter pole in 1:27.4. In the stretch, Gingras was motionless as the rookie trotting filly made her way home in :28.3 to score a 7 ¼ length victory.

Im Outstanding finished second, while Twice Is Right was third.

Owned by Tom Hill, Caprice Hill was purchased for $55,000 as a yearling and spent the winter training down under the care of Alagna’s mother, Donna, in Chicago

“I bought the filly at Harrisburg and a lot of the colts of Tom Hill’s we send back to Chicago and mom gets them ready,” said Alagna, following the race. “When she had her back there she said this filly is really special…I put the bike on her the first time and I said boy this filly is something nice.”

A daughter of Kadabra, Caprice Hill now has four wins from five starts and earnings of over $157,000 to start her career.

“She’s been really good, she’s real versatile, she’ll come off the pace, whatever you need to do with her,” said Alagna. “She’s just a very bright filly with a big future.”

Trained and driven by Wayne ​Henry, Could It Be Magic got away fourth and sat along the rail until nearing the half. After Silvia trotted by the half-mile pole in :58.3, Henry and Could It Be Magic made a big rush to clear to the front and opened up several lengths on their rivals at the three-quarter pole in 1:27.4.

In the stretch, Could It Be Magic maintained her big advantage and trotted home in :30 to win by 3 ½ lengths. High Heels made a charge on the far outside to finish second, while Pennies From Above was third.

A daughter of Kadabra, Could It Be Magic now has five wins from six starts and earnings of just under $150,000. She is owned by Henry Stable and Fred Brayford.

Could It Be Magic has three victories this season in Ontario Sires Stakes Gold events. She paid $4 to win.

Driven by Sylvain Filion, Emoticon Hanover left from post nine and was parked around the first turn in fifth-position. Dewdle All Day and Dustin Jones led the field down the backstretch and kept Thankful Reward parked in second, while Emoticon Hanover followed second-over.

After the half in :58.3, Dewdle All Day led the field around the final turn and put away Thankful Reward, who began to back up, forcing Emoticon Hanover three-wide to overtake the lead at three-quarters in 1:28.3.

In the stretch, Emoticon Hanover continued to trot strong right to the wire and cruised home in :28.4 to win by a length and three-quarters. Worldclass Hanover held on for second by a nose over a charging Ultimate Shopper. 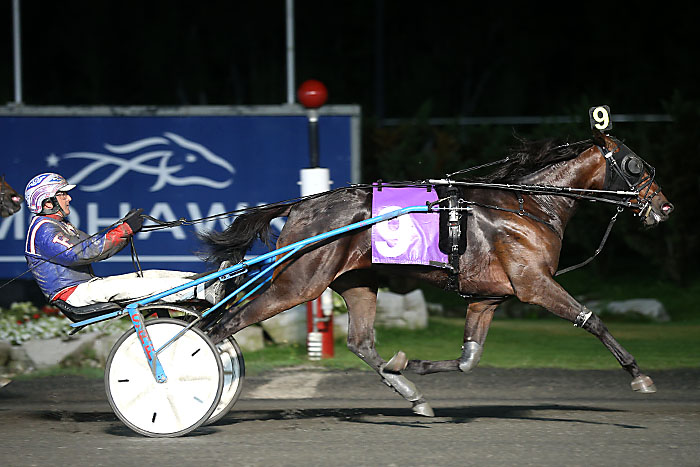 Also a daughter of Kadabra, Emoticon Hanover improved her record to four wins from five starts with the Champlain victory. The Luc Blais trainee won a conditioned event heading into Thursday’s start and also has two victories in OSS Gold events.

Emoticon Hanover was a $165,000 yearling purchase by Determination and the Champlain victory increased her earnings to over $112,000. She paid $4.90 to win.

Two-year-old trotting fillies will be back in the spotlight next Thursday (September 10) for the eliminations of the Peaceful Way Stakes.