Nocturnal Bluechip by a nose in Preferred

MILTON, November 3, 2018 – Nocturnal Bluechip scored his third Woodbine Preferred win of the season by the narrowest of margins on Saturday night at Mohawk Park.

A field of eight pacers, including three-year-old The Downtown Bus, clashed in the weekly $34,000 top-class event.

The Preferred opened with Always A Hotshot making the top and posting a :26.1 opening-quarter before Easy Lover Hanover found the pylons and the top spot entering the backstretch. Nirvana Seelster moved out from fourth ahead of the half and charged up to poke a neck in front at a :54.4 half.

Nirvana Seelster cleared to the top and led around the far turn. Physicallyinclined pressed first-up with a trio of followers in the outer-flow, including Nocturnal Bluechip and driver Sylvain Filion, who were fourth-over and six-lengths from the top turning for home.

Nirvana Seelster attempted to grind out the victory on the front after reaching three-quarters in 1:22.

A five-year-old gelding, Nocturnal Bluechip now has three wins in his last five starts with all coming at the Preferred level. The Gillis trainee now has 10 wins and $132,350 earned in 27 starts this season for owner Nlg Racing Stable.

Nocturnal Bluechip improved his career numbers to 17 wins and $427,551 earned with his victory Saturday. He paid $11.40 to win.

A gift and sign presentation was conducted for Roy and Auciello in the winner’s circle. 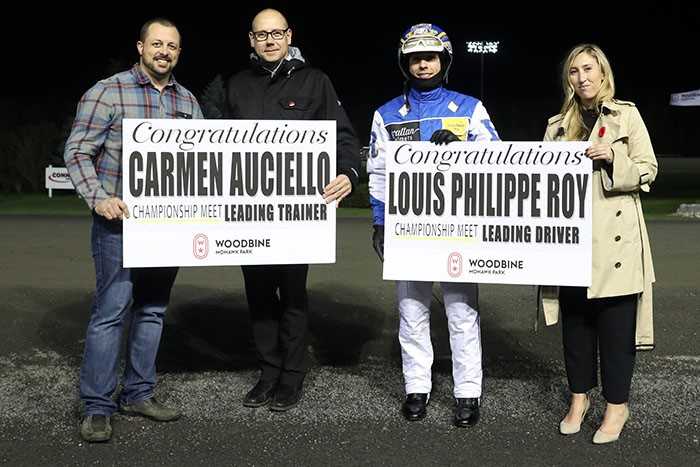