Ben Baillargeon trainee Alarm Detector put on quite the display to capture the Wellwood Memorial by 5 ¼ lengths.

The son of Chapter Seven was hustled off the wings of the gate by driver Trevor Henry and would find the front at the opening-quarter in :27.3. Leading by a pair of lengths over pocket-sitter Lawmaker, Alarm Detector trotted by the half in a snappy :55.4.

There was no slowing down on the far turn, as the 3/5 favourite stormed the third-quarter in :28 to reach that station in 1:23.4. With a lead of more than three-lengths turning for home, Alarm Detector waved goodbye to his rivals and drew off to win with authority in a Stakes, Track and Canadian record time of 1:52.4.

You Know You Do finished second, while Maxus was third and Lawmaker was fourth.

Alarm Detector, who won his elimination in 1:54.4, is now six for seven with $276,870 earned for owners Tom & Elizabeth Rankin, Claude Hamel and Santo Vena.

The son of Chapter Seven was a $110,000 yearling purchase last November at Harrisburg and his performance Monday left his connections thrilled.

“It’s unbelievable and to think it’s in the William Wellwood,” said co-owner Tom Rankin. “I know Bill Wellwood was one of the giants of the industry and it’s such an honour to win in his memory and it wouldn’t have happened without Ben (Baillargeon), one of the greatest trotting trainers in the world.”

Despite winning in a record time and by more than five-lengths, Baillargeon believes Alarm Detector wasn’t even perfect in Monday’s race.​

“I was a little nervous with half in :55 and three-quarters in 1:23, he hasn’t been that speed and he was a little game in front,” said Baillargeon. “We’re going to have to work a few things around him right now but his next start is in one month, the Breeders Crown, so he needs to relax a little more.”

Monday’s Wellwood victory is the first for both Henry and Baillargeon. 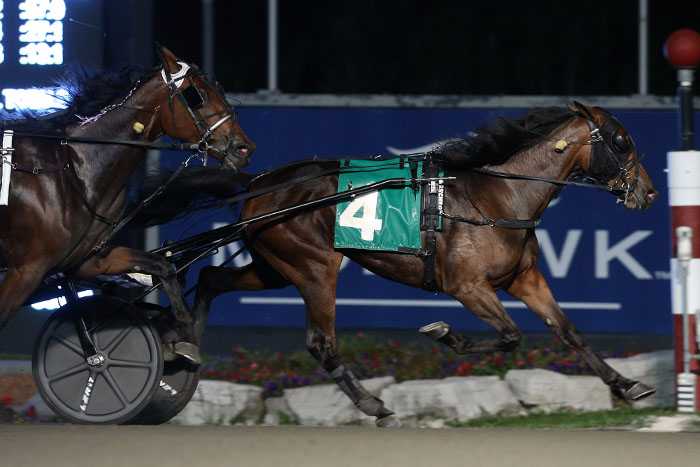 Sent off as the 1/5 favourite, Manchego got away comfortably in third, but didn’t sit for long. Driver Yannick Gingras quickly sent the Takter trainee to the lead after an opening-quarter of :27.1, clearing at three-eighths.

Manchego trotted by the half in :57, while the other elimination winner from last week, Phaetosive, got underway from fourth for driver/trainer Trond Smedshammer. The two favourites were one-two at three-quarters in 1:25, with Manchego holding a two-length advantage.

In the stretch, Smedshammer stayed in behind the heavy-favourite and waited until late in the lane to take his shot. However, Manchego was not going to give in, as she trotted a final-quarter of :27.4 to secure the victory by three-quarters of a length.

“She was really really good,” said Gingras post-race, who pointed out Manche​go was better this week than last when she won in 1:54.1.

“I could’ve taken her off the gate, I could’ve (done) whatever I want and that’s the way she’s been all year except last week she got a little excited, but they got it fixed for this week.”

A daughter of Muscle Hill, Manchego is now eight for eight with $538,398 earned for owners Black Horse Racing, John Fielding and Herb Liverman. She was a $120,000 purchase at the 2016 Lexington Selected Yearling Sale.