Repeat winners own the night at Woodbine

TORONTO, January 27 – Awesomeness and Lyons Sands were able to repeat in round two of the Snowshoe Series, while Waasmula became harness racing’s newest millionaire with a fifth-place finish to a repeat-winning Sandbetweenurtoes in the $30,000 Mares Preferred Friday night at Woodbine.

The second leg of the Snowshoe Series got things rolling on Friday’s 11-race card.

Awesomeness, who won his first leg division by more than seven-lengths, delivered another impressive gate-to-wire performance to take Friday’s first $17,000 Snowshoe division by 5 ¼ lengths in 1:54.1.

The Ryan Maxwell trainee was put on the front by driver Doug McNair and was never challenged, posting fractions of :28.2, :57.2 and 1:25.4, before pacing home in :28.2 for his second win of the season.

A four-year-old gelded son of Mach Three, Awesomneness, who made his career debut in October, has been cleaning up this winter at Woodbine and now has seven wins in 13 starts.

Owned by Martin Scharf, Awesomeness has banked $22,000 in three starts this season to bring his career earnings total to $84,600.

The second division was almost identical to last week’s, as Lyons Sands went gate-to-wire with Senior K having to settle for second after a two-hole triple. 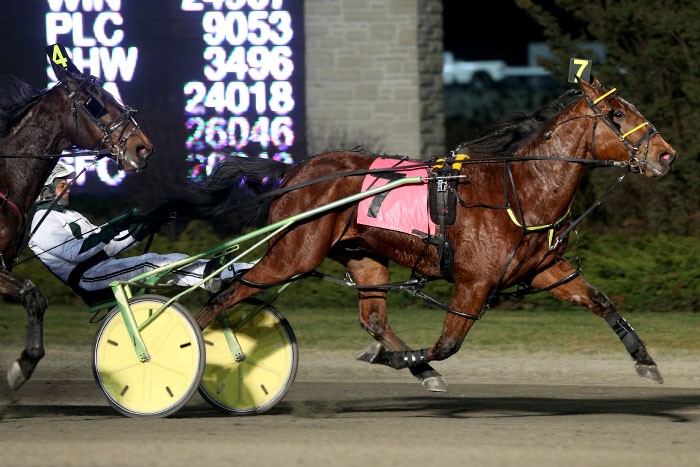 Driven by J Harris, Lyons Sands blasted off the wings of the gate to grab command ahead of Senior K. The Bruce Goit trainee posted fractions of :27.1, :57 and 1:25.3 to lead the field into the lane.

In the stretch, Senior K was angled off the pylons and took another crack at Lyons Sands, but just like last week, the leader did not surrender and crossed the wire first in 1:55.

Senior K came up three-quarters of a length short, while Ohio Larry was third.

A four-year-old gelding, Lyons Sands is now two for two in 2017 after winning nine of 13 last season. The son of Somebeachsomewhere is now an 11-time winner with career earnings of $61,090 for owner Geoffrey Lyons Mound.

Three and four-year-old pacers, who were non-winners of two races or $30,000 lifetime as of October 31, 2016, were eligible for nomination to the Snowshoe Series.

The $39,400 Snowshoe Final will take place next Friday (February 3) and both Awesomeness and Lyons Sands will have an opportunity to complete a sweep of the series.

Also on Friday, Sandbetweenurtoes captured the $30,000 Mares Preferred for the second-consecutive week, while Waasmula became harness racing’s newest millionaire by picking up a fifth-place cheque.

Richard Moreau trainee Sandbetweenurtoes had to fight off Sayitall BB in the stretch to secure a 1:52.3 front-end victory. The six-year-old daughter of Somebeachsomewhere was driven to her 23rd career victory Friday by Doug McNair.

Owned by Brad Grant, Sandbetweenurtoes has quickly banked $37,500 this season to bring her career earnings to $817,722.

Despite not visiting the winner’s circle, Waasmula’s connections can celebrate after her fifth-place finish in the top-level event for pacing mares. The nine-year-old daughter of Million Dollar Cam earned $1,500 Friday to push her over $1 million in career earnings.

Waasmula is owned and bred by Brent Vincent and trained by Bruce Goit. Her regular driver Trevor Henry was in the sulky to reach the milestone.

Waasmula is a 29-time winner during her career with a mark of 1:49.2 taken at Mohawk.