The Champlain, Simcoe and Ontario Sires Stakes Gold make up the ‘Pacing Derby’ undercard. Over $1.4 million in purses will be up for grabs.

The Canadian Pacing Derby, first raced in 1936, is the oldest stakes race in Canadian harness racing. The 2017 edition has been carded as Race 7 and will feature 10 of the top older pacers in the sport.

Trained by Rene Allard, Keystone Velocity turned in an incredible :25.1 final-quarter to zoom by rivals and capture his elimination in 1:48.2. The nine-year-old was eight-lengths from the lead at the half and is charted with a :51.3 back-half.

Keystone Velocity, who is proving to be like a fine wine, is having a career-best season at age nine, with seven wins in 14 outings and over $644,000 earned. A $3,000 yearling purchase back in 2009 for his original connections, Keystone Velocity is from the final crop of famed stallion Western Hanover.

The opportunity to compete in Canada’s oldest stakes race is a career accomplishment for driver Simon Allard.

“I’m glad my brother put him in the Canadian Pacing Derby, it’s like a dream come true for me to get to race him,” Allard shared. “I used to be in the dorm back in the day as a groom and saw Real Desire and Four Starzzz Shark race in (2002) and now I’m in it.”

Keystone Velocity was a $40,000 supplemental entry to this year’s Canadian Pacing Derby.

Rockin Ron, who captured the other elimination, is one of three horses that trainer Ron Burke will send out in this year’s ‘Pacing Derby’. 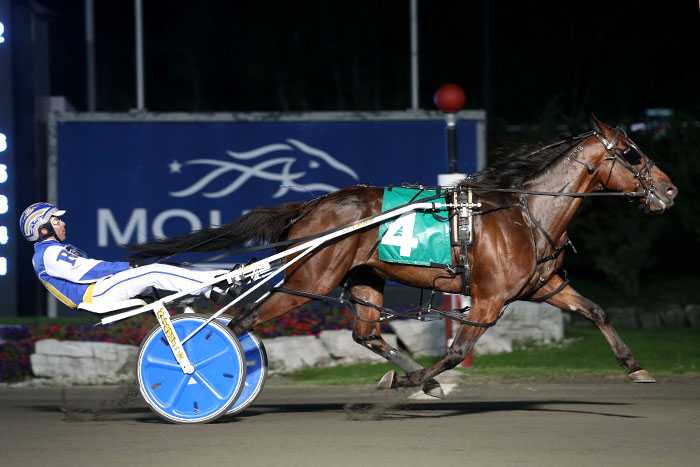 Owned by Burke Racing Stable LLC, Weaver Bruscemi LLC and RTC Stable Inc, Rockin Ron is six for 20 this season with nearly $250,000 earned. The five-year-old has finished either first or second in six of his last eight starts.

Rockin Ron enters the ‘Pacing Derby’ with 26 career victories and a career bankroll of $815,858.

The gritty pair of All Bets Off (PP 6) and Check Six (PP 10) complete the Burke ‘Pacing Derby’ trio. Yannick Gingras is currently listed on both horses after qualifying each for the final.

A winner of over $2.6 million, All Bets Off has been a familiar face in these big events over the last few seasons. The six-year-old son of Bettors Delight finished fourth in last year’s ‘Pacing Derby’ after finishing sixth in the 2015 edition.

Four-year-old Check Six had a two-race win streak snapped in last Saturday’s elimination. The son of Somebeachsomewhere has already captured the Sam McKee Memorial and Dan Patch Stakes this season to help boost his career-earnings to over $1.5 million.

Similar to All Bets Off, McWicked (PP1, David Miller), Nirvana Seelster (PP7, Trevor Henry) and Dealt A Winner (PP8, David Miller) all have past experience in the Canadian Pacing Derby.

Casie Coleman trainee McWicked will surpass $2 million in career earnings with a top-five finish in Saturday’s contest. The six-year-old competed in the 2015 ‘Pacing Derby’, finishing fifth.

Local standout Nirvana Seelster, who is a career winner of over $700,000, will be making his third ‘Pacing Derby’ appearance and will be looking to change his luck.

The Bill Budd trained six-year-old made a break at the start in last year’s edition, but still managed to finish sixth. In the 2015 edition, ‘Nirvana’ finished ninth.

Mark Silva trainee Dealt A Winner was an impressive third to Wiggle It Jiggleit and Always B Miki in last year’s ‘Pacing Derby’. The five-year-old gelding, who’s earned $877,131 in his racing career, recently captured the Roll With Joe Stakes at Tioga Downs.

While the heavyweights will have the main spotlight, Saturday’s card also features talented rookie pacers and sophomore trotters.

The $194,760 Champlain Stakes for two-year-old pacers will feature 21 pacing colts and geldings competing over two divisions (Race 5 and 9).

Undefeated pacing colt Summer Travel (pictured) headlines the group of pacing colts and geldings in the evening’s second division. The Casie Coleman trained son of Western Ideal, who was scratched sick from last weekend’s Nassagaweya, is three for three and currently the fastest two-year-old in North America, with a mark of 1:50.3.

Percy Bluechip is the star in a field of nine competing for $169,381 (Race 2). The Dr. Ian Moore trained daughter of Shadow Play is four for four and last Saturday captured the Eternal Camnation Stakes in 1:51.4.

Gearing up for the Canadian Trotting Classic eliminations on September 9, a field of 12 three-year-old trotting colts and geldings will square off in the $165,838 Simcoe Stakes (Race 6).

Returning to Mohawk for the first time since capturing the Goodtimes Stakes, International Moni ​(pictured) will start from post-four for driver Scott Zeron and trainer Frank Antonacci. The son of French Stallion Love You is four for six this season with $233,600 earned.

Saturday’s stakes-packed card also features a pair of $98,000 OSS Gold divisions for three-year-old pacing colts and geldings. They have been carded as Races 8 and 10.

A program proof for the Canadian Pacing Derby card is available by clicking here.

The first 300 guests to come through the doors Saturday will receive a free program and there will also be live music, BBQ, summer games and giveaways going on all evening long.