CAMPBELLVILLE, August 25 – On A Sunny Day and Southwind Tesla each picked up a Grand Circuit victory in Friday’s Casual Breeze Stakes at Mohawk Racetrack.

A group of 16 three-year-old trotting fillies were split into a pair of $81,412 Casual Breeze divisions.

The opening split saw On A Sunny Day take full advantage of an easy opening-half to win in 1:54.2.

The Luc Blais trained filly was driven by Sylvain Filion, who opted to put the Ontario Sires Stakes star on the front from post-two. On A Sunny Day cut an opening-quarter of :28.2 before getting a second-quarter breather of :29.4.

On A Sunny Day ramped up the tempo with a :28 third-quarter and then proceeded to step home in :28.1 to hold off two-hole challenger The Erm by three-quarters of a length. Winter Sweet Frost finished third, while Highland Top Hill was fourth.

“I was just trying to see what unfolded from the gate and only the one horse was leaving, so I thought I would give myself a chance on the front end,” Filion said post-race. “She’s just a sweetheart. She’s not very big, but she’s all heart and tonight we got soft fractions and it was pretty easy for her.”

Owned by Determination of Montreal, Quebec, On A Sunny Day has been a consistent performer for trainer Blais. The daughter of Muscle Mass now has four wins in seven starts this season to improve her career record to eight wins in 13 outings.

The second division featured overwhelming favourite Magic Presto, but it was another filly that would grab the spotlight. 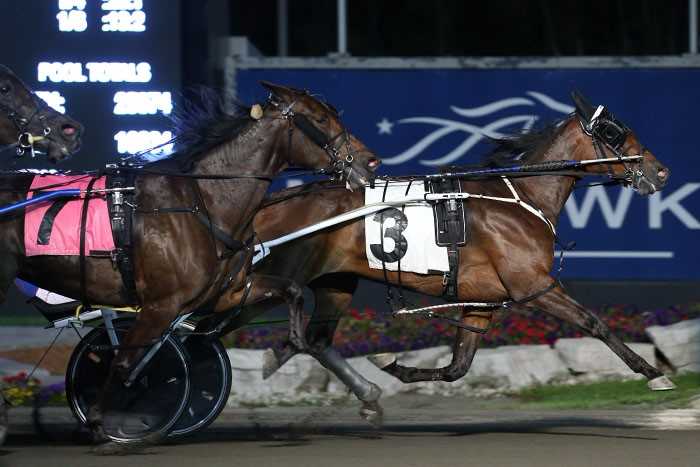 Southwind Tesla and driver Phil Hudon came through with a 13-1 upset victory in a career-best 1:54.

Magic Presto got away third, but was quickly moved to the lead by Trevor Henry just after an opening-quarter of :28.1. The 1-5 favourite found the front and led through middle-half fractions of :56.4 and 1:25.2.

Around the final turn, Hudon came first-up from fifth with Southwind Tesla and that would turn out to be a winning move. Magic Presto was not her usual self and gave way to the challenger in the lane and finished fifth.

Southwind Tesla seized the lead and proceeded to hold off a blocked Dream Together and a flying Dream Baby Dream to win by half a length.

“I figured that Trevor (Henry) would be going to the front, so I let James (MacDonald – Sweet Of My Heart) in front of me and was hoping to get a second-over maybe,” Hudon said post-race. “I ended up grinding up slowly and she felt good when I touched her on the tail coming out of the turn and then it just worked out that Sylvain (Filion – Dream Together) didn’t get out until late.”

Southwind Tesla is co-owned and trained by Rene Dion. The Chapter Seven filly is now three for 11 this season with all three victories coming in her last five starts, including a New York Sires Stakes score on July 20.

The Casual Breeze victory puts Southwind Tesla over $100,000 in seasonal earnings and up to $154,739 in career earnings for owners Dion, Suzie Kerwood and David Nicol.