A group of 12 three-year-old trotting fillies contested a rich $223,193 division of the Simcoe Stakes.

Roger Mayotte trainee Elegant Serenity was sent off as the 3/5 favourite from post six, as she entered Friday’s contest on a two-race win streak.

Driven by Mayotte, Elegant Serenity and several fillies flashed early speed heading into the first turn. The public’s choice was parked around the first turn, but quickly cleared to the front ahead of Danielle Hall in the second-quarter.

Lock Down Lindy pressed at Elegant Serenity in the middle-half, but Mayotte put away the challenger in the third-quarter and took his filly by the station in 1:25.

In the stretch, Elegant Serenity showed plenty of determination and trotted home in :28.2 to win by a length over a hard-closing Speak To Me. Bee The Queen finished third, while Danielle Hall was fourth.

A daughter of Kadabra and out of the great Elegantimage, Elegant Serenity is owned and bred by Doug Millard. Following the race, Millard talked about his homebred star filly.

“She’s really come on strong the last two or three starts,” said Millard. “Middle of winter I was about ready to breed her because she was quite a handful. Sandra had to really work at her to get her right. She got her right and we turned her over to Roger and he’s done the rest.”

Elegant Serenity now has five victories from seven starts this season after going winless in seven starts last season. The sophomore trotter increased her bankroll to over $288,000 with the victory. The clocking of 1:53.2 was a new career-best for the Mayotte trainee and she paid $3.20 to win.

Elegant Serenity will now head to the race named for her mother, the Elegantimage Stakes.

A total of 19 two-year-old trotting colts were split into two divisions of the Champlain Stakes Friday.

In the $117,406 first division, Southwind Frank continued his dominance of the rookie trotting division with a 1:54.1 victory. 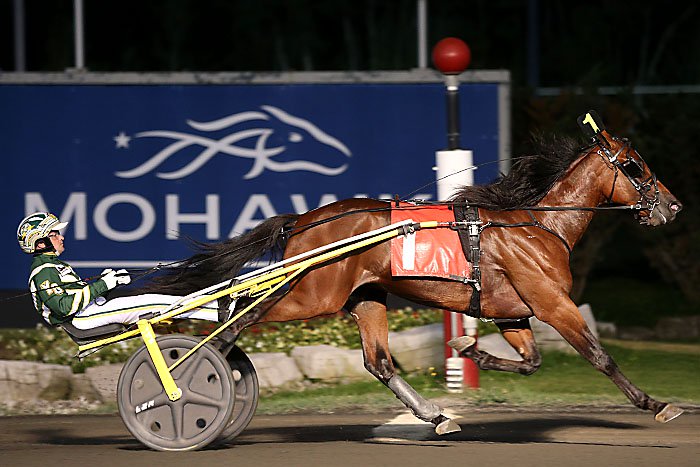 Driven by Yannick Gingras, Southwind Frank got away third, but was quickly moved to the front in the second-quarter and reached the half in :57.1. The Ron Burke trainee trotted his third-panel in :29, before drawing away from his rivals with ease in the stretch to score a 4 ¼ length victory.

Brooklyn Hill, who got a two-hole trip, held position for second, while Zlatan was third.

A son of Muscle Hill, Southwind Frank added the Champlain Stakes to his impressive resume, which includes the Peter Haughton Memorial and the New Jersey Sires Stakes.

Southwind Frank’s record now sits at five wins from six starts and earnings of over $310,000. The Burke trainee paid $2.50 to win.

Dominion Beach capitalized on breaks by the favourites to win the $118,907 second division.

Driven by Brett Miller, Dominion Beach showed good early speed to grab the front heading into the first turn. Tony Soprano, the 3/2 second-choice, got away second, but made a break in the first turn. Deep Impact, the 6/5 favourite, inherited the second spot following the break, but he made a miscue of his own in the second-quarter.

Dominion Beach was able to take full advantage of the situation by posting middle-fractions of :59.2 and 1:28, before trotting home in :28 to score a maiden breaking victory by a length and half in 1:56. 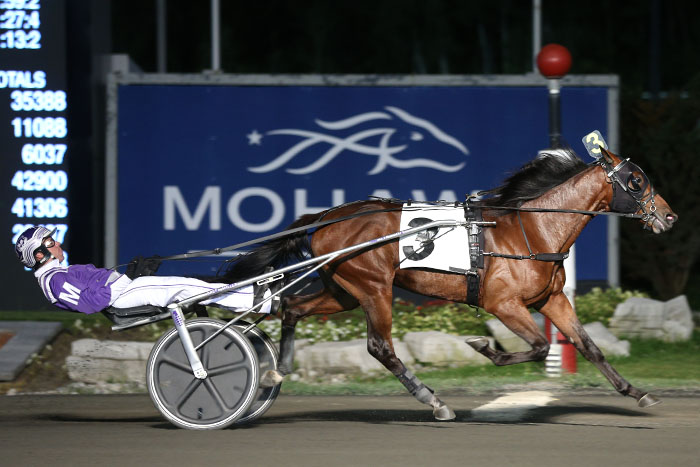 Lean Hanover finished second, while Dreamliner rounded out the top-three.

A son of Muscle Hill, Dominion Beach is trained by Nancy Johansson for owner Courant Ab and was purchased for $90,000 as a yearling at Harrisburg. The rookie trotting colt was making his sixth career start Friday and bumped his earnings to over $86,000 with the victory.

The three-year-old trotting fillies and two-year-old trotting colts will return to Mohawk Racetrack next Friday (September 11) for more Grand Circuit action. Up next for the fillies is the Elegantimage Stakes eliminations, while the rookie trotters will contest the eliminations for the William Wellwood Memorial.