TORONTO, February – The classy pacing mare Waasmula found the winner’s circle for the first time in 2017 and the 30th time of her career Friday night at Woodbine Racetrack.

The nine-year-old daughter of Million Dollar Cam converted off a second-over trip from driver Trevor Henry to win this week’s top class for pacing mares in 1:51.3. 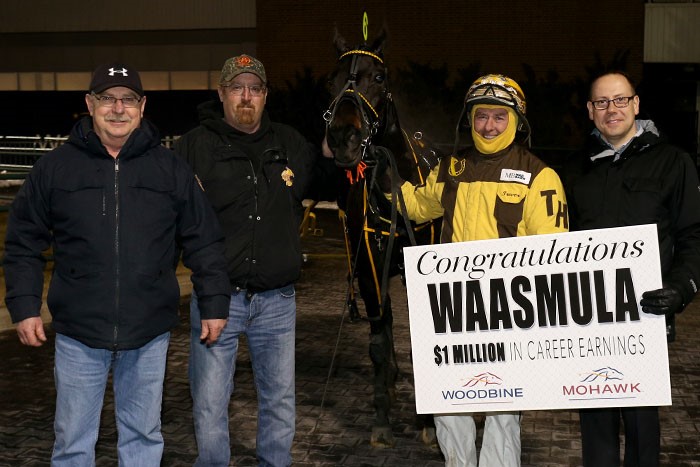 Friday’s victory was extra special for Waasmula, as it was the Bruce Goit trainee’s first win since surpassing $1 million in career earnings on January 27th at Woodbine.

Bred and owned by Brent Vincent of Allenford, Ontario, Waasmula was making the 131st start of her career Friday and fourth of her nine-year-old season. Last year, she won seven of 28 starts while banking over $293,000.

Waasmula has been competing regularly in the top classes for pacing mares on the Woodbine Entertainment circuit since 13 days after capturing the Ontario Sires Stakes Super Final for three-year-old pacing fillies back in November of 2011.

In recognition of recently surpassing $1 million in career earnings, Waasmula and her connections were presented with a sign from the Woodbine Entertainment Group following her victory Friday.

The Guelph, Ontario resident picked up three more victories Friday to give him 47 this season at Woodbine. McNair now has a 26-win lead over nearest rival Louis Philippe Roy, who won two-races Friday.

McNair will look to grow his lead on Saturday, as he is scheduled to drive in all 10-races. Post time is 7:30 p.m.