Just four cards of live harness racing remain at Woodbine Racetrack before the Standardbreds move permanently to Woodbine Mohawk Park in Milton, Ontario. It hasn’t felt like long since racing returned to the Airport Oval back in October, but now the packing begins as we enter the final week.

Just as things wrap up at Woodbine, the racing continues to pick up as Spring brings plenty of anticipation for the big races to come later this season. The last week saw the track leaders cleaning up, a dazzling effort by a Pepsi North America Cup eligible, a Preferred pick-off and much more.

A quiet Saturday night (by his standards) didn’t stop Louis Philippe Roy from leading the way over the last week. The Mont-Joli, Quebec native clicked for 10 victories over four cards, including a “Grand-Slam” on Monday to cap off the week in style.

Roy’s most notable victory of the week came with older trotter Big Rich in Monday’s $34,000 Preferred Trot. It was one of four victories for Roy and trainer Richard Moreau.

Roy has now built a 29-win lead atop the Woodbine Driver Standings for 2018.

It was just another typical week at the office for Richard Moreau, as Canada’s five-time defending Trainer of the Year picked up eight-wins over four-nights of racing.

Moreau sent out just two starters on Thursday and was held off the board, but then his barn got down to business over the night three-nights. The Puslinch, Ontario resident had a Friday “Hat-Trick”, a single Saturday and a “Grand-Slam” on Monday.

Moreau’s barn sent out 27 starters over the week and had a winning percentage of 29.6%.

SPICY DOUBLE STARTS THE WEEK WITH A BANG – Thursday, March 29

If you cashed on Thursday’s Early-Double at Woodbine, you probably felt pretty good the rest of the week. Back-to-back 20-1+ upsets kicked off the new stretch of racing at the Toronto oval.

Both upset winners went coast-to-coast and both won by multiple lengths. Guscrest was the biggest upset winner of the week.

It certainly wasn’t beach weather on Thursday evening at Woodbine, but that didn’t stop three-year-old pacer Beachin Lindy from turning in another dazzling performance.

The gelded son of Somebeachsomewhere entered Thursday’s Non-Winners of Two-Races or $25,000 lifetime off a massive 6+ lengths score on March 15. Beachin Lindy and driver Louis Philippe Roy got away fifth on Thursday and would angle out at the half without cover.

Beachin Lindy paced well on the far turn to pull up along side race-leader Larrys Petrock at three-quarters. In the stretch, Beachin Lindy would hit his best stride and pull away from Larrys Petrock in the final-eighth to win by nearly five-lengths in 1:54 over a ‘Sloppy’ track.

Trained by Steve Charlton, Beachin Lindy is now three for five in 2018 and five for eight overall. The gelded pacer was originally a $120,000 yearling purchase at the 2016 Lexington Select Sale and made his Baby-Race debut last June for Ray Schnittker.

Beachin Lindy’s time in Schnittker’s barn was short and he somehow found his way to Truro, Nova Scotia, where he raced three-times before begin sold to current owner Larocque Racing Stb Inc. of Thornhill, Ontario.

Beachin Lindy and runner-up Larrys Petrock are both eligible to this year’s Pepsi North America Cup.

Trainer Ben Baillargeon finished off the month of March in style with a three-win night on Saturday.

Rock This Way, who was a big 69-1 upset winner in a 2016 division of the Nassagaweya Stakes, surprised the betting public on Saturday, as he won at odds of 12-1.

Heading into the final week of the Woodbine meet, Baillargeon has won 14 of 84 starts this year at the Toronto oval and sits fourth in the Trainer Standings.

Woodbine Entertainment announced Monday that K. Trevor Wilson and Dylan Playfair from the hit-show Letterkenny will be the hosts of this year’s Pepsi North America Cup on Saturday, June 16 at Woodbine Mohawk Park. 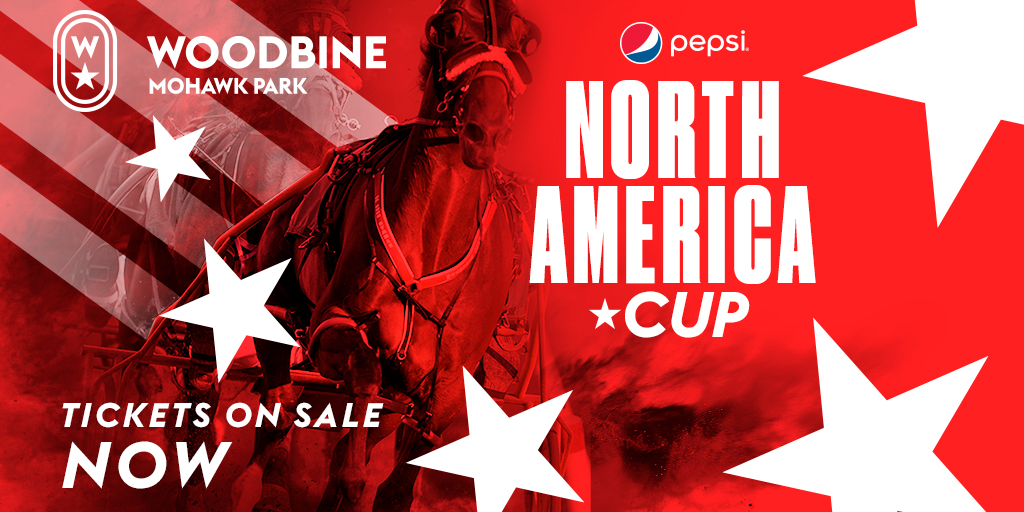 Tickets officially went on sale for this year’s $1 million Pepsi North America Cup on Monday morning. Fans coming to Woodbine Mohawk Park on Opening Weekend will have an opportunity to purchase tickets for 25% off and it was also announced a portion of ticket sales will go towards the Milton District Hospital Foundation.

To find out all the details around this year’s Pepsi North America Cup, click here.

The numbers have been released from the March 15th Woodbine Stakes payment deadline and just four of the 79 three-year-old pacers nominated to this year’s Pepsi North America Cup have dropped out.

A strong group of 75 remain eligible for Canada’s richest harness race, including award-winners Stay Hungry and Lost In Time.

Woodbine has also made available all the eligible horses for each stakes event in 2018. To view the lists and read more about this year’s Pepsi North America Cup eligible horses, click here.

The era of live harness racing at Woodbine Racetrack is almost complete and Mark McKelvie of Woodbine’s Media Department continues to take fans down memory lane.

Check out some of the classic races from over the years at Woodbine Racetrack.

2001 – The late-great rookie sensation Western Shooter muscles by Mach Three at the wire to capture the Breeders Crown 2YO Colt Pace for Campbell & McIntosh. Great race that featured 4-horses who went on to make over $1 million. pic.twitter.com/7BpU2rcsG7

2003 – The Pacing Mare division around this time was outstanding! Eternal Camnation battles back to defeat Bunny Lake & capture the Breeders Crown! Cam Swifty, Worldly Beauty, Always Cam & Molly Can Do It round out the field. pic.twitter.com/hIFA8gbi0i

WHO IS THE ALL-TIME LEADING DRIVER & TRAINER AT WOODBINE – Monday, April 2

Just four cards remain at Woodbine Racetrack and buzz is growing around the topic of the “All-Time Leading Driver and Trainer” at the Toronto oval.

Mark McKelvie of Woodbine’s Media Department has been counting down the “All-Time” leaders on Social Media. Currently the countdown has unveiled numbers 10 through 4.

The “All-Time” leaders will be announced on Saturday evening with a special presentation taking place.

Who do you think the “All-Time Leading Driver and Trainer” is?

We've now revealed #10 through #4 on the #BetWoodbine Driver/Trainer All-Time Wins Leaderboard. Who do you think is #1?

We will be recognizing the All-Time Leaders later this week with a special presentation. pic.twitter.com/BVevPxDo2O

The final week of live harness racing at Woodbine Racetrack. Only four nights remain at the Toronto oval, so make sure you either join us on track or watch via simulcast as we bid farewell.