Whether it’s racing in Ontario or the Breeders Crown Charity Challenge, Steve Heimbecker appreciates the importance, impact, and influence of teamwork and collaboration.

He’s one of standardbred racing’s most influential and successful owners, a horseman dedicated to making a difference in the sport.

Three years ago, the majority of Heimbecker’s racing stock was American-sired horses. In 2020, he altered his blueprint, a ‘buy local’ philosophy, upping his support for the Standardbred racing scene and breeding program in Ontario.

When he was asked to take part in a special initiative leading up to this year’s Breeders Crown races on October 28 and 29 at Woodbine Mohawk Park, Heimbecker didn’t hesitate in providing his answer.

“When I was presented the opportunity to do this, it was a no-brainer. We have a vibrant racing community here in Ontario, people who champion the sport and want to give back. When you are fortunate enough to own a lot of racehorses and be in a position to give back to an industry you love so much, something like this is a wonderful opportunity.”

Established in 2019 at Woodbine Mohawk Park, the BCCC has raised more than $800,000 for local charities of each year’s Breeders Crown host track.

The format for this year’s BCCC showcases four teams, with each entry comprised of a prominent owner, their charity of choice, and a Woodbine leading driver, competing to net the largest donation amount from a minimum pool of $200,000.

Each team has already pledged $25,000, which guarantees their charity of choice a minimum donation in that amount. An additional $100,000 has been raised through donations made by industry participants.

Supporters are asked to go on Twitter and use the hashtag of their favourite team and include #CrownCharity22. Team Steve Heimbecker/James MacDonald’s hashtag is #BeckerThanTheRest.

“It’s wonderful to be able to help out a charity of your choice, to raise money and awareness for them,” offered Heimbecker. “It’s just as win-win. That’s the best way to describe it. If we’re able to do these things, especially for one of the premier nights in Canadian and North American racing, it’s a great venue to have these charities in the spotlight, using it as a platform to showcase some great causes.

“I know Brad Grant does a lot of really great things for the industry, as do Marvin and Al, two people who are huge contributors to our great sport, as well as Determination, a marquee owner in the business who are also thrilled to be part of this. To have them all be involved in this is no surprise. The drivers who were asked to team up with us, they were more than willing. I’ve talked to James [MacDonald] about it and he’s really excited. These are all good, quality people.”

PRI helps adolescents struggling with addictive behaviours and other mental health issues to reclaim their lives, their families, and their futures.

The only program of its kind in Canada, PRI offers a live-in treatment centre and outdoor leadership experience for youth, ages 13 to 19. Located near Shelburne, Ontario, PRI combines therapy with a fully-accredited education program to reinforce the healthy life skills required for a successful future.

Vaughan Dowie, who joined Pine River Institute as its CEO in October 2011, has more than 30 years of experience as a senior manager in public sector and community organizations, is thrilled to see PRI as part of the Breeders Crown Charity Challenge.

“First off, it’s an honour for us to be one of the four charities to be part of this challenge,” started Dowie, a past Executive Head of Public Affairs at McGill University in Montreal. “It’s also very exciting. We’re very appreciative to have been included. Secondly, it’s important to us. We’re a relatively small organization and to have an opportunity to attract new resources to our program is always welcome. We’re in an area of substance abuse and mental health issues, an area that many people understand is more important than ever. The world of addictions and the world of post-Covid mental health issues is kind of a perfect storm for a lot of kids, so it’s really great to be able to get more support to do our work.”

Dowie is hopeful that through initiatives like the BCCS, more people will have the chance to get to know Pine River Institute and its efforts to help those who utilize their services.

What should people know about PRI?

“They should know that we are a family-oriented program, where we not only work with the young person who needs are support, but also with the families or caregivers who are part of their lives as well. We’re a unique program in North America, in that we combine both a residential treatment approach with a wilderness therapy approach. There are not many, if any, other organizations in North America that do the kind of therapy we do with our programs. We now run a transition program as well, where we do aftercare. We have a public education called the Centre for the Family Initiatives. For an organization of our size, we have a relatively robust research and evaluation capacity. Hopefully, people become more familiar with us through this great Breeders Crown event.”

Heimbecker, a slot owner for the upcoming Mohawk Million, is happy to shine the spotlight on PRI.

“My brother-in-law does a lot of PR work – he owns a large public relations firm in Toronto – and he’s involved with a lot of charities and a lot of boards. This particular one really resonated with me because we do a lot of significant donations to the Waterloo Suicide Prevention program. With Pine River, these are kids that really need to get out of the current scenario they find themselves in and get healthy, mentally, and get the help they need. And that’s what Pine River does. It’s an amazing cause and it’s helping youth, which is very important. For me, it comes down to helping our youth. Not everyone had a great childhood, some kids have gone through or are going through a lot. Any time we can help the kids, we absolutely should.”

With the charity challenge, there’s no doubt he’s in it to win it.

“I’m a competitive guy and I don’t want to lose the challenge. It’s like a horse race. The owners, everyone involved, we’re all friendly, but as soon as the horses turn the right way, for the next minute and 55 seconds we’re not friends, we’re competitors. And we’ll likely see that come out. It’s going to be a great night.”

In keeping with the horse racing theme, Heimbecker offered up morning line odds for each team in the challenge. 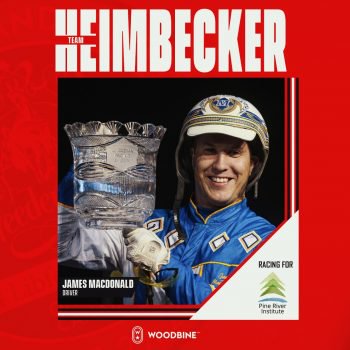