Participants up for the Breeders Crown Charity challenge

MILTON, September 14, 2022 – The launch of the 2022 Breeders Crown Charity Challenge (BCCC), sponsored by the Libfeld-Katz Breeding Partnership, is at the post.Established in 2019 at Woodbine Mohawk Park, the BCCC has raised more than $800,000 for local charities of each year’s Breeders Crown host track. In 2021, the challenge set a new event record, raising over $400,000 for charities in The Meadowlands (East Rutherford, New Jersey) area.This year’s event is also shaping up to be something special.The format showcases four teams, with each entry comprised of a prominent owner, their charity of choice, and a Woodbine leading driver, competing to net the largest donation amount from a minimum pool of $200,000.The four teams are listed below:

Each team has pledged $25,000, which guarantees their charity of choice a minimum donation in that amount. An additional $100,000 has been raised through donations made by industry participants.

“This is a great addition to an already exciting event,” said Bob McClure. “It’s one more thing that adds to the excitement of the Breeders Crown. I’m really happy to be part of it.”

“I’m looking forward to teaming up with my fellow drivers to help raise money for some very worthwhile charities.”

$50,000 will be distributed to the charities based on each driver’s performance in the Ontario Sires Stakes (OSS) Lampman Cup standings. The team with the driver earning the most points in the OSS season will be awarded $20,000. The remaining $30,000 will be distributed as $15,000, $10,000, and $5,000, respectively, based on each driver’s ranking in the standings.

The team hashtags are listed below. Supporters are asked to go on Twitter and use the hashtag of their favourite team and also include #CrownCharity22.

“We are looking forward to putting on a first-class event and making this year’s Breeders Crown one of the most memorable editions in its storied history,” said Jim Lawson, Woodbine Entertainment CEO. “From a world-class night of racing, to raising money and awareness for deserving charities, to the support of so many passionate and caring horse people, this year’s Breeders Crown is something we can all truly be proud of.”

The Breeders Crown Charity Challenge would not be possible without the generous support of the following individuals and groups: 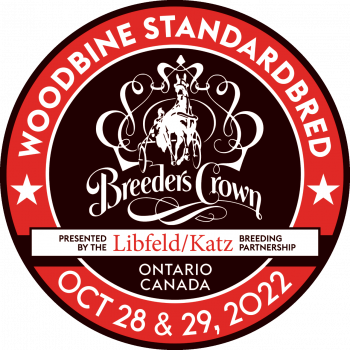