May 28, 2021 – Woodbine-based trainer Roger Attfield will look to notch a road victory when he sends out Gray’s Fable in the first running of the $110,000 Douglas Park Stakes, Saturday at Churchill Downs.

A six-year-old son of Gio Ponti, Gray’s Fable is set to take on eight rivals in the 1 1/16-mile turf Douglas Park, scheduled as race 11 on a card featuring seven stakes events, including the Grade 3 Regret and Grade 3 Matt Winn.

Closing in on 2,000 career wins, Attfield, a dual hall of fame conditioner, chases another stakes crown with an ultra-consistent Kentucky-bred.

Sporting a record of 4-1-4 from 12 career starts, Gray’s Fable launched his 2021 campaign with an impressive score in the Grade 3 Kitten’s Joy Appleton on March 27 at Gulfstream Park.

Racing for the first time in 197 days, the gelding, owned by Steve Goldfine, Kari Provost and Jeff Zlonis, controlled the tempo in the one-mile Appleton, for 4-year-olds and up on turf, going on to notch a 2 ¼-length score in 1:32.64 over a firm course. 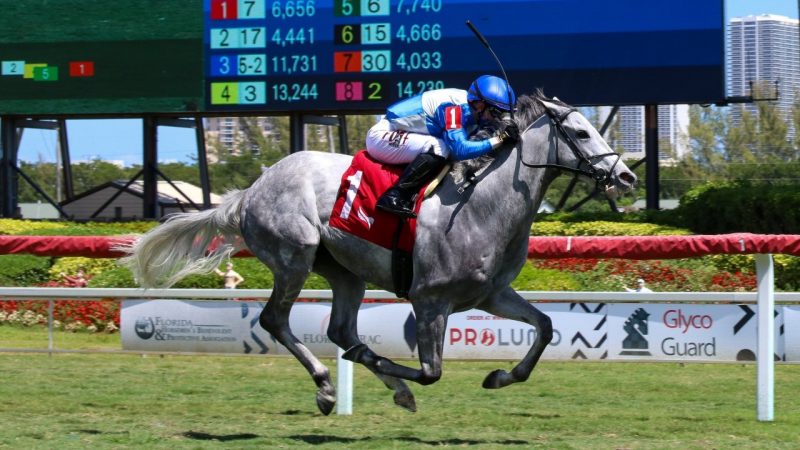 Gray’s Fable was making his first start since taking a one-mile optional claimer on the Woodbine turf last September 12.

Junior Alvarado had plenty of praise for his mount after the Appleton.

“He’s a horse that in the post parade he was kind of full of himself. He was showing he’s kind of like an attitude horse, he wants to do things his way. He doesn’t want you to get in his way. When we left the gate he broke very good so I kind of smooched him a little bit and let him do his own thing. I was pretty sure that he knew what he was going to do.”

After a trio of thirds and a fourth to launch his career, including a third in his debut at Woodbine on November 13, 2019, Gray’s Fable broke his maiden in April 2020 at Gulfstream. He’s posted three wins since that milestone victory, including the Appleton.

“It was a great effort in the Appleton,” said Attfield. “He’s one of those horses that always shows up every time. That something you can always count on with him. He ran really well in that race, so hopefully he can come up with another effort like that one on Saturday.”

He arrives at the Douglas Park off a third in the Opening Verse Stakes at Churchill on April 29.

“It was another good effort on his part. You know that you’ll always get an honest performance from him. He’s doing really well. The intention is to run in this race and come up to Woodbine for the Connaught Cup (Gray’s Fable was sixth in last year’s running). He’s a nice horse. I’ve had a number of horses that go out and try every time they run and that’s the category he fits into. You know that he’ll always go out and try.”

Fans can watch and wager on all the Churchill Downs action through HPIbet.com. First post is slated for 12:45 p.m. ET.