TORONTO, October 10, 2021—Trainer Mark Casse put an exclamation point on a remarkable Woodbine weekend by sending out Art of Almost and Skygaze to a 1-2 finish in Sunday’s $150,300 Ontario Matron Stakes.

The Ontario Matron, a 1 1/16 mile Tapeta race for fillies and mares, attracted a field of six and followed Sunday’s featured Cup and Saucer Stakes, which also produced a Casse exactor. Woodbine’s run-a-way leading trainer saddled nine winners over the weekend, including three stakes.

“I wanted to get an outside run,” said jockey Emma-Jayne Wilson after guiding Art of Almost to her 1 ¼ length victory. “She can be a little quirky out of the one-hole and I was looking to position myself where I was in range, but could also work my way to the outside so that I could just get her going around the turn.”

Art of Almost raced in fifth and sixth place early while Crystal Glacier, a third Casse runner in the lineup, and Juxtapose disputed the front end through fractions of :25.25, :49.90, and 1:14.22.

Skygaze, the 3-5 favourite under Patrick Husbands, had started from the outside post and was wide around the first turn before settling into a stalking position within striking distance of the leaders.

Art of Almost, meanwhile, had been biding her time until Wilson swung her to the outside and popped the question turning for home. The mare answered with a turn of foot which carried her past her rivals to her going-away victory in final time of 1:43.99.

“I mean, as we straightened away, you can see I moved up to them at the top of the stretch and she wasn’t even quite ready in full flight yet,” said Wilson. “So, I was pretty confident when we measured up to Patrick there and, when I really reached for it and asked her, she gave me every she had.” 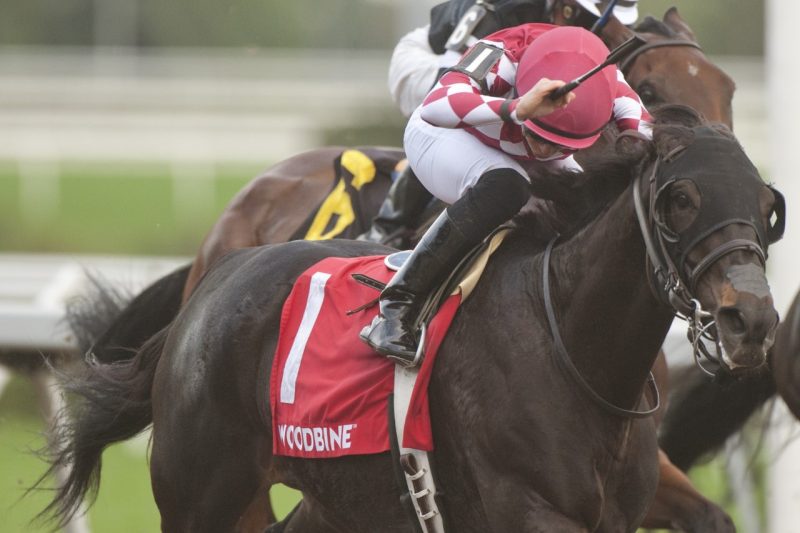 Skygaze, unable to match her stablemate’s closing burst, held second place by a half-length over a game Juxtapose with Crystal Glacier a neck back in fourth.

A 5-year-old Kentucky-bred who races for Len Green’s D J Stable LLC, Art of Almost was winning her first stakes race in her 25th career outing. In her start prior to the Ontario Matron she had finished fourth, five lengths behind Skygaze and 4 ¾ lengths behind Crystal Glacier over the same course and distance.

Art of Almost was the second career Ontario Matron winner for Casse, who had captured the 2013 edition with Sisterly Love.

Wilson won Ontario Matrons with Miss Concerto in 2006. Art of Almost was her third stakes winner of the current meeting.

The Ontario Matron was not run last year when the racing and stakes schedules were impacted by COVID-19.