Ivar, the resilient 6-year-old son of Agnes Gold (JPN)-May Be Now, has endured his share of hard luck over a career that has yielded an impressive 6-0-2 mark from 12 lifetime starts.

His trainer is hopeful the dark bay, a two-time Breeders’ Cup Mile participant, can experience some good fortune when he goes postward in the $1 million Woodbine Mile.

“He is a very good horse, and he shows that every time,” said Lobo. “He’s had a few little things happen along the way, but he always comes back and runs a strong race.”

Ivar (BRZ) is owned by Bonne Chance Farm and Stud R D I. A two-time Group 1 winner in Argentina, where he began his career, he won the 2020 Grade 1 Shadwell Turf Mile at Keeneland before finishing fourth next time out in the Breeders’ Cup Mile at Keeneland.

He arrives at the Woodbine Mile in winning form. On July 9, the graded stakes winner took the $100,000 Jonathan Schuster Memorial Stakes at Horseshoe Indianapolis, posting a one-length score in the 1 1/16-mile trek.

The road to the starting gate wasn’t an easy one.

Scratched from the Maker’s Mark Mile in April after Lobo felt Ivar (BRZ) wasn’t quite ready, then again from the May 7 Turf Classic at Churchill due to a minor foot ailment, the horse was making his first start since a third in the Breeders’ Cup Mile last November.

A win in the Schuster was anything but guaranteed.

“This poor horse, I mean, when he runs, he runs so hard,” praised Talamo, after the race. “He’s one of those you wish you could get about six, seven races a year. All the credit goes to Paulo Lobo and his team. Every time this horse runs, he has him A+ ready to go. No difference today. It set up well for us. They had a good pace, but I was loaded the whole way and just tried to get him a good trip around there.”

“We had been pointing him to that race at Churchill Downs, but we wound up running in Indiana, and it was great because he had a very good race there,” said Lobo. “He ran huge coming from a long way off. More importantly, he came back very well from that race.”

Lobo said a third start in the Breeders’ Cup Mile is on the agenda for Ivar (BRZ).

“In the Breeders’ Cup last year at Del Mar, he got stuck with an outside post position and it was a very slow pace that day for that kind of race, but he still ran very hard and very strong to finish third. He was gaining at the end. Both of his Breeders’ Cup races were good ones.”

For now, the focus is on another Mile.

“When he would race in Argentina, he knows very well how to run a mile with one turn,” said Lobo. “It [E.P. Taylor] reminds me a little bit of the course at San Isidro in Argentina, which he used to run on. He’s very accustomed to that, so I believe he will enjoy the course at Woodbine.”

As will the Brazilian-born Lobo, who will be making his second visit to Canada’s Showplace of Racing.

His initial trip to Woodbine came almost 20 years ago.

“For sure I will be there. I’m coming to see him Wednesday at his barn. I came to Woodbine, but not to race, a long time ago, in 2004. I had one horse race there [Lady Preach was sixth in a maiden special weight race on August 22, 2020]. I’m looking forward to coming back.”

While his horse likely won’t be prominent in the early stages of the Woodbine Mile, Lobo is hoping to see his turf star’s typical late-running talents kick-in down the long E.P. Taylor stretch.

“His turn of foot is what comes to mind first for me. He can really put in a powerful late run. Hopefully, there can be some strong early pace and it will set up nicely for him.”

Joe Talamo, who has 2,256 career wins as of September 12, will be aboard on Saturday. 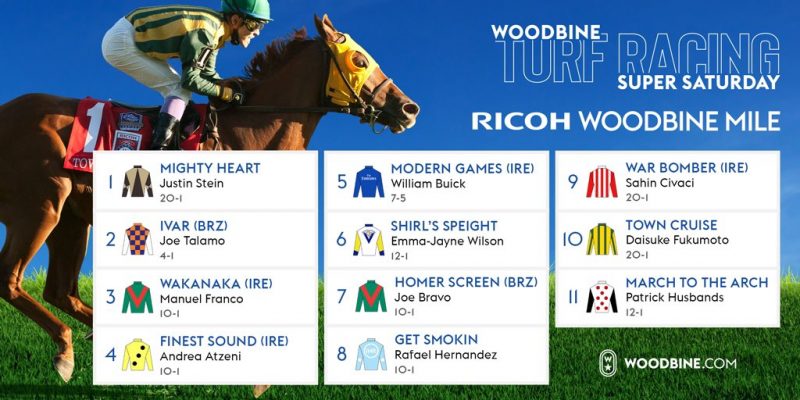