TORONTO, June 8, 2018 – Woodbine Entertainment is proud to announce the Ontario Lottery and Gaming Corp. (OLG) is the official partner and title sponsor of Canada’s Triple Crown of Thoroughbred racing for 2018. 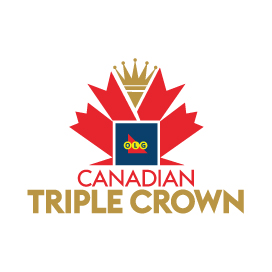 The OLG Canadian Triple Crown for three-year-old Canadian-foaled Thoroughbreds consists of the $1 million Queen’s Plate (June 30 at Woodbine), $400,000 Prince of Wales Stakes (July 24 at Fort Erie Racetrack) and $400,000 Breeders’ Stakes (August 18 at Woodbine). Established in 1959, the prestigious series is contested over three different distances and racing surfaces, progressing from 1-1/4 miles over the Tapeta track at Woodbine to 1-3/16 miles over Fort Erie’s dirt course to 1-1/2 miles over Woodbine’s famed E.P. Taylor turf course.

“OLG is proud to be the title sponsor for the Canadian Triple Crown, our country’s most prestigious series of thoroughbred horse racing that showcase the incredible talent we have here in Canada,” said Cal Bricker, Senior Vice President of Horse Racing at OLG. “Horse racing has been a part of Ontario’s history for over 250 years and OLG’s support for the sport—and the positive impact it has on our economy—will continue for years to come.”

“We are proud to have OLG as the official partner of Woodbine Entertainment and the naming title partner of the OLG Canadian Triple Crown,” said Chris Lush, Woodbine’s Senior Vice President of Technology, Wagering and Broadcast. “We look forward to working together towards achieving a common goal of building awareness and exposing new audiences to the sport’s premier Canadian races.”

“TSN is pleased to partner with Woodbine Entertainment to become the home of Canadian horse racing, and add the OLG Canadian Triple Crown to our roster of marquee sporting events,” said Shawn Redmond, TSN’s Vice President of Content Strategy and Business Operations. “The Queen’s Plate is an iconic part of Canadian sports history, and we look forward to again showcasing it for fans across the country.”

Brian Williams will return as host of the network coverage alongside longtime commentator and Canadian Horse Racing Hall of Famer Jim Bannon. They will be joined by SportsCentre’s Laura Diakun and Woodbine’s Jason Portuondo to report on all the action from the barn to the paddock, along with live hits from the Hats and Horseshoes Party, presented by Stella Artois.

Tuesday, July 24, will mark the 83rd running of the Prince of Wales Stakes, which was won last year by Cool Catomine.

“The Prince of Wales Stakes is our signature event at Fort Erie Race Track, and we are very happy to once again be broadcast on TSN,” said Tom Valiquette, Chief Operating and Financial Officer of Fort Erie Live Racing Consortium. “The Canadian Triple Crown is an important piece of thoroughbred racing, and it is great to have these historic races televised for people to experience.”

The 12th and most recent horse to win the OLG Canadian Triple Crown was Wando, back in 2003, with Patrick Husbands aboard for trainer Mike Keogh and owner Gus Schickedanz.