· honoured Northern Dancer; born at Windfields Farm, Northern Dancer won the Kentucky Derby in record time, the Preakness Stakes and the Queen’s Plate, among other races. As a sire of sires, it is estimated that up to 70 per cent of all thoroughbreds carry his bloodline today. To further recognize his historic contribution to both horse racing around the world and the legacy of E.P. Taylor’s Windfields Farm, Oshawa City Council, with the support of UOIT, has decided to designate Northern Dancer’s gravesite under the Ontario Heritage Act;

· recognized Dr. Gary Polonsky as the inaugural recipient of the E.P. Taylor/Windfields Farm Champion Award. The award recognizes an individual who has exemplified innovation and overcome adversity, which Dr. Polonsky has done tirelessly throughout his career. The challenges that he overcame as a visionary to champion and create UOIT and to make Durham College a stronger post-secondary institution has transformed both the Regional and Oshawa economies to be more knowledge-based and competitive, and have them recognized around the world;

· demonstrated the City’s continued commitment to honouring the Windfields Farm legacy by presenting UOIT with the remaining funds from the 2012 Minto Group donation, totalling $113,443.12, to undertake landscaping and site improvements adjacent to Northern Dancer’s gravesite in the core farm area of the former Windfields Farm; and,

· presented Ms. Noreen Taylor, the third Chancellor of UOIT as well as wife of the late Charles Taylor and daughter-in-law of the late E.P. Taylor, and Dr. Steven Murphy, President and Susan McGovern, Vice-President, External Relations and Advancement of UOIT, with the original Windfields Farm entry sign for display as part of the school’s efforts in preserving the heritage of the farm.

The “Honouring the Windfields Farm Legacy” program was approved by Council in 2016 as a commitment to preservation, education, events and commemoration by the City, UOIT and others. The program has already advanced and completed a number of items to honour Windfields Farm, E.P. Taylor and Charles Taylor and their legacy, including but not limited to:

· the designation of the Windfields Stone House and Trillium Horse Cemetery under the Ontario Heritage Act;

· streets, parks and woodlots named after the Taylor family, Windfields Farm and its horses, and horse racing; and,

Today’s event further supports the implementation of this Legacy program. The E.P. Taylor/Windfields Farm Champion Award will be presented annually as a reminder that Oshawa’s future is built on the legacies of the men and women like E.P. Taylor: the innovators, leaders and champions. 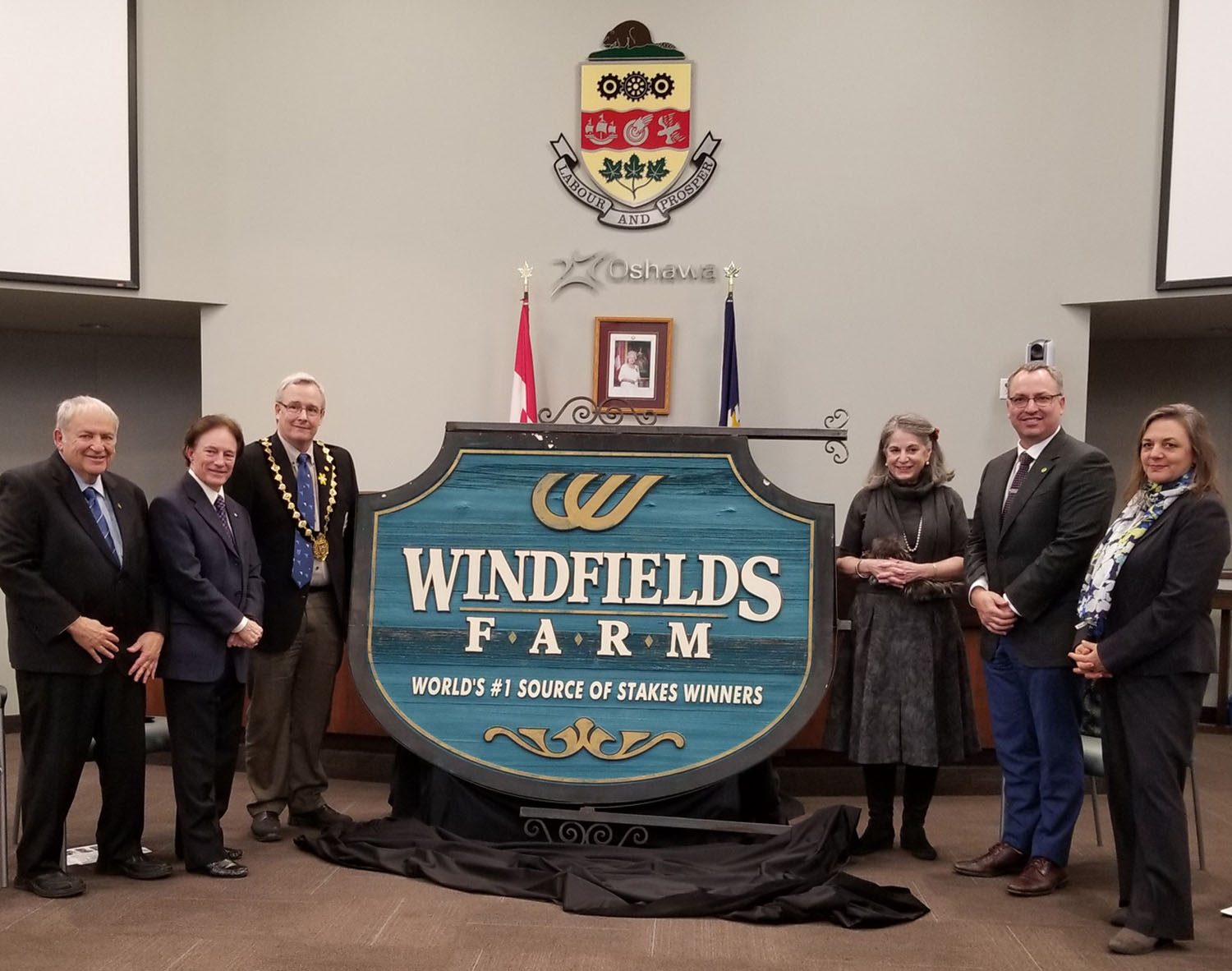 “The story of Northern Dancer, the Taylor family and Windfields Farm is filled with determination, grit and perseverance,” said Mayor John Henry. “Honouring the Windfields story annually will serve as inspiration for all those who hear it year after year.”

“Northern Dancer’s victory in the 1964 Kentucky Derby at Churchill Downs was an unforgettable performance that has become more remarkable with the passage of time. After winning the United States’ greatest race in record time – a clocking that remains the third-fastest renewal in its 143-year history – the first Canadian-bred Thoroughbred to win the Kentucky Derby became a champion in both countries before he embarked on his spectacular breeding career. While his successes on North American racetracks were considerable, E.P. Taylor’s star quickly became an international sensation as a sire and his impact on the sport will resonate for many decades to come. Churchill Downs thanks the City of Oshawa for honoring Northern Dancer, a horse for the ages, in a salute that will be shared by the Taylor family and racing fans around the world who loved this unforgettable champion,” Kevin Flanery, President, Churchill Downs Racetrack.

“The Kentucky Derby Museum is proud to join the City of Oshawa in celebrating the heritage of E.P. Taylor’s Windfields Farm and the great Northern Dancer. Not only was Northern Dancer the first Canadian-bred horse to win the Kentucky Derby, he never finished worse than third in his 18 career starts, and was the winner in 14 of those. He was surrounded in his racing career by some of the Derby and the industry’s best, including five-time Kentucky Derby winning jockey Bill Hartack and two-time Derby winning trainer Horatio Luro. Both men, as well as the great Northern Dancer, are members of Thoroughbred racing’s Hall of Fame. Of course, Northern Dancer’s greatest contribution to the Thoroughbred industry may be through his sons and daughters. Northern Dancer’s offspring had phenomenal success in both North America and Europe, ensuring his legacy continues into the future. Thanks to everyone in the City of Oshawa that is working to preserve the memory of Windfields Farm, Northern Dancer and the larger Thoroughbred industry,” Patrick Armstrong, President and CEO of the Kentucky Derby Museum, Louisville, Kentucky.

“In 1965, Canada’s Sports Hall of Fame inducted this non-human athlete who almost single-handedly raised Canadian thoroughbred standards to the international level. As the first Canadian-bred and owned horse to win the Kentucky Derby and gain significant fame for the nation in the world of horse racing, Northern Dancer was very deserving of this induction honour. The legacy of Northern Dancer lives on and inspires the Oshawa and the horse racing community to this day. We congratulate Northern Dancer on this designation,” said Janice Smith, Interim President & CEO, Canada’s Sports Hall of Fame.

(The Corporation of the City of Oshawa)