These Three Things: Ready to Repeat

Get to know the equine stars of Woodbine and Woodbine Mohawk Park, as we go beyond the chart lines and stat sheets to deliver three fascinating facts about a horse who will look to make their mark in 2022.

To get us out of the gates, Ready to Repeat steps into the spotlight, with trainer and co-owner Gail Cox offering insight into the personality of the consistent 2020 Victoria Stakes winner. 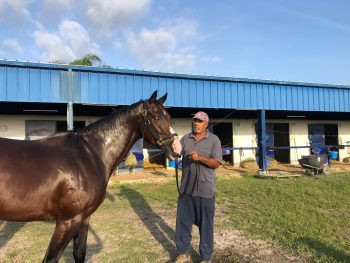 Talk, but don’t touch:
“He loves attention at the front of his stall. He likes you being there, but he doesn’t want you to pet him. He’ll bite if you do that. He’s a handful, but very normal to train. Going out, coming home, I would say he’s very playful. He doesn’t get hot and bothered, but he’s energetic. We make allowances for going out and coming home. Unfortunately, the pony hates taking him because he’s all over him. He acts like a colt, but he’s gelding. So, the striking, the biting… it’s what he does. He doesn’t like to be touched around his head. His ears, especially. We often like to train him in ear plugs, so we just slide those in. Anything else around his ears, we just leave them alone. He gets his ears trimmed twice a year – definitely not on a regular basis. I really, really like this horse. I’m very used to him and all his idiosyncrasies.” 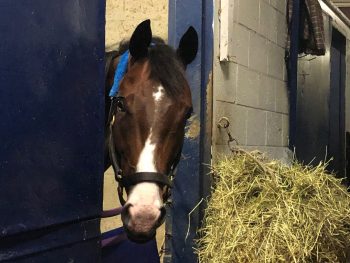 In the zone:
“He’s all business when it comes to running. He’s very competitive. He can be a little bit of a handful in the paddock, but he’s very competitive. He’s good in the gate and really does everything right in the afternoons. He can be a little softer after you give him his mints, and when his head is down grazing, he’s as happy as he can be.”

Hanging with Holly:
“He does like our dog [Holly]. But if she’s in front of his stall and turns around, or isn’t paying attention, he would bite. When they are face to face, it’s fine. She likes him and she likes a lot of the horses. The ones that put their noses down, she loves them.”