Christmas with the Morans

Story and photos by: Beverley Smith for Woodbine.com

TORONTO, December 21, 2018 – The Christmas tree is up. The lights are twinkling at the crib. The aroma of turkey and ham drifts through the house. Profiteroles beckon.

Christmas at the house of jockey Davy Moran and his wife, Maria, is charmingly simple, heartfelt, meaningful. Their home is set in an idyllic scene, tucked up against a tree-lined ravine, where deer approach. Outwardly, it looks so quiet. Inwardly, perhaps not so much.

After all, their eight children, aged 2 to 15, rumble through the house and rouse it into life. What is Christmas without children? It’s mayhem, especially on Christmas morning.

Five of the children were born in Ireland, where Davy grew up, the son of a publican (pub owner) who liked to while away some off-hours at a racetrack and thereby spawned a jockey in his family. Maria, a former jockey, harkens from Genoa, Italy, a gem of historic art and architecture. Together they emigrated to Canada in 2011 with William (now 15), Pietro (13), Angela (11), Evan (10) and Matteo (8).

The Morans settled in, determined to adopt the Canadian way of life, with hockey and sledding and snow and all the rest. They have learned to skate. (“Well, not really me,” Davy said. “I kind of hobble around.”) Three of their sons play organized hockey. And they have learned to ski since they came to Canada. Family Day at Hockley Valley has become a thing.

In Canada, they had three more children, all girls: Maria (6), Sara (3) and little Martha (just turned 2).  (In total, four boys and four girls.) They’ve raised them all the same way, yet each one is entirely different from the other, with different interests and likes.

All Christmases are memorable, but Maria will never forget one back in Ireland, while she was pregnant with Angela and close to her due date. Off having Christmas at Davy’s parents’ home, the family – true to their pastime – laid bets that she wouldn’t make it to Christmas dinner. But Maria enjoyed her Christmas dinner and even had a restful night. The next morning, she awoke and went to the hospital. “So there was the Christmas present,” she said. “It was beautiful because I didn’t miss the night’s sleep.”

Davy has his own Christmas memory. Living in a stone house “out in the middle of nowhere” in Ireland, they heard a knock at the door on Christmas Eve and were met with a man, clutching his throat, blue in the face, asking for help, apparently felled with an allergy. Davy drove him to the hospital on Christmas Eve. For that man, it was a Christmas gift.

Their own Christmas is simple and authentic, driven by their Roman Catholic faith. They feel they need to go to church like they need to go to the doctor. And their values are based on what they believe; that central to Christmas is the birth of Christ, and all that entails. And togetherness and spirit is more important than scoring the latest bauble.

“I find that to raise children in this generation, you are always under pressure to keep them up with material things,” Maria said. “But we always try, every day, to keep it simple. You see small children, they want, they want, they want. And when they get a toy, they want something else. I think we are like that, too.”

The Morans try to stem the tide of materialism. They don’t make a big deal out of Santa. “We don’t stress too much about the commercial side of it,” Davy said. “It’s only this week [December 6] that we started putting up the Christmas stockings.”

The children decorate their own hand-made letters to Santa, write down what they would like and prop them up on a Christmas tree branch. “We don’t give them everything they ask for,” Maria said.

“They ask for what they need,” Davy said.

Some of the younger children still believe in Santa Claus. If he and his antlered friends do a tap dance on the roof, they don’t hear it, snuggled in their beds. The Morans leave out milk and cookies in the house and they don’t forget the livestock: Rudolph never turns his nose up at a few carrots on the ground. The next morning, the children find all that is left of the treats – a few crumbs – along with a letter from Santa, thanking them for the hospitality, but also telling them to behave, to share their things and do what their parents tell them.

Molly, their two-year-old mild-mannered Golden Retriever, gets a gift, too. “Molly is the cherry on the cake in our family,” Maria said.

They go to mass (en masse) on Christmas Eve.

Their main Christmas tradition is putting up “the crib” – in other words, the nativity scene, a central custom in both Ireland and Italy. It takes centre stage. It perches, like a television set, on one long wall. With its twinkly lights, it is pretty and comforting.

On a day when he wasn’t scrubbing away on a mount at Woodbine, Davy hustled over to a country market to pick out a Christmas tree with a couple of his kids. (Real trees only, please.)  “There was a nice warm apple pie there ready, so we had to take that, too,” he said. “It’s not good the day before racing but….”

Up the tree went in a corner of the living room and when the rest of the kids tumbled off the school bus, “they just fired the balls on,” Davy said. And this time, they got to dress the whole tree. Last year, when Martha was only a year old, she persisted in taking off all the balls on the lower limbs. So they decorated the top half. This year, it’s back to normal.

Normal? Crazy is normal for the Morans. There is no cathedral hush. “It never ends!” Maria said, thinking of the hockey games, the jazz dance lessons, and the American footballing. Children have Christmas concerts. William plays the saxophone, tootling into the rush. It’s definitely not quiet.

“We are so used to anything that could happen to us!” Maria said.

The Mother Mary, sitting by the crib, sees it all. Others only wish.

“The morning is wild,” Davy said. “People say to us all the time, they would just love to be a fly on the wall on that morning, just to see.”

The kids open their gifts in the morning and it’s “a big mayhem,” Davy said. Then they’ll do morning prayers, in which the children give thanks for the gifts they get, but also to pray for all the people who have nothing.

“We try to put that point out there, of how spoiled they are today,” Davy said. “I think even last year, there was a bombing in someplace where a lot of children got hurt, so we actually showed them that.”

The long table is dressed with a white table cloth, Christmas crackers, too. Then, the feast: heaping platefuls of turkey, ham, carrots, broccoli, turnip, Brussels sprouts, and potatoes (“The Irish took over this time,” Davy said.) And there are desserts, too.

“We do a good feast,” Davy said. But that’s not the end of it. Cognizant of how it feels to be alone – in Canada with their families in Europe – the Morans invite people who have no place to go.

“It’s easy to set a place for one more,” Davy said.

“Sometimes these other people have no families,” Maria said. “So we spend the day together. So instead of being alone, they can come along.”

“And throw a Guinness into them,” Davy says.

The photos prove it. They do a karaoke thing, a contest on who plays a musical instrument the best. They bang the drums. They strum a little guitar. It’s madness. It’s the Moran Christmas. 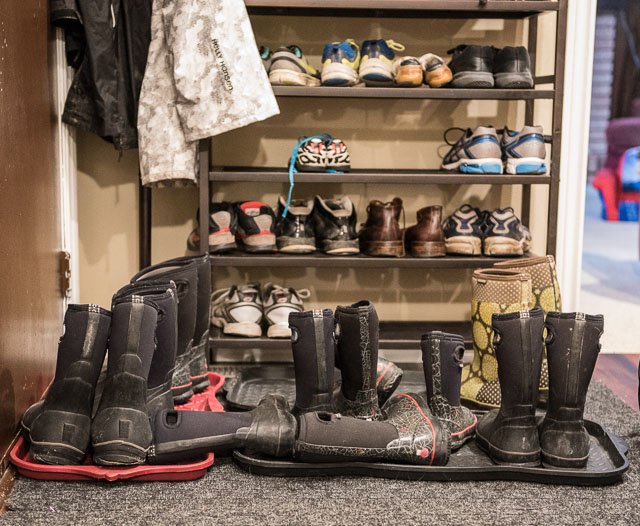 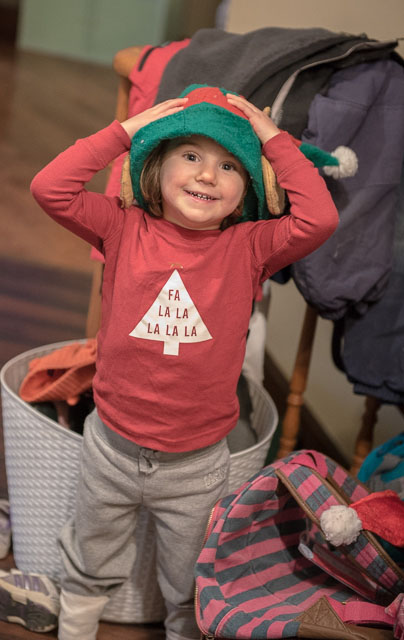 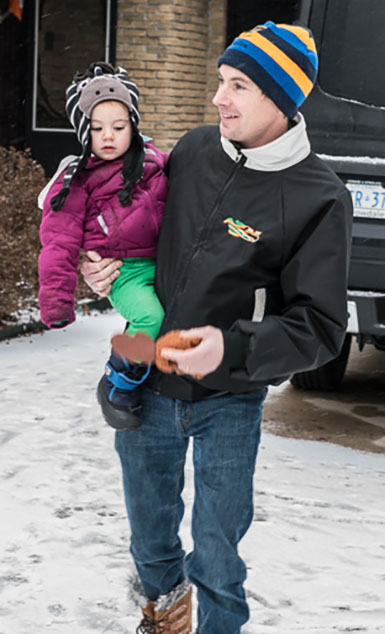 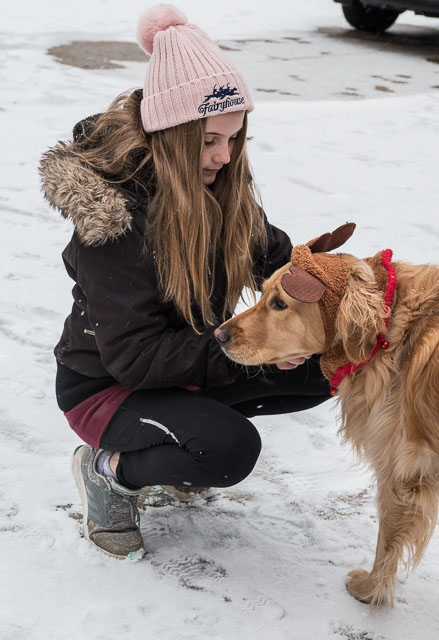 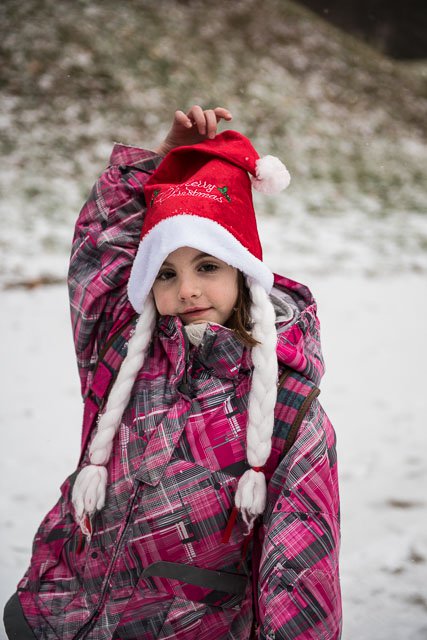 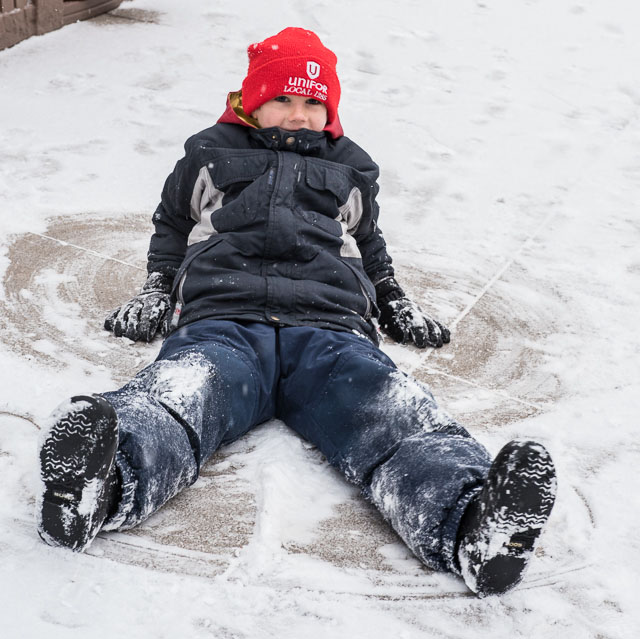 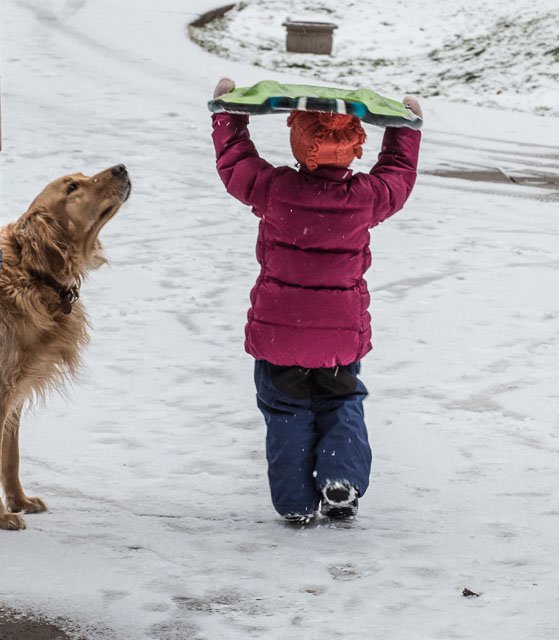 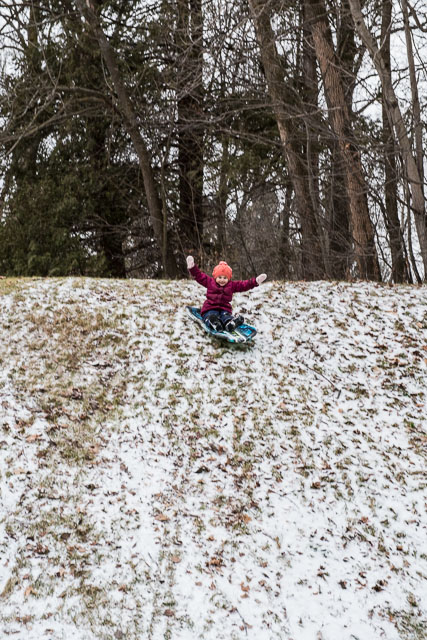 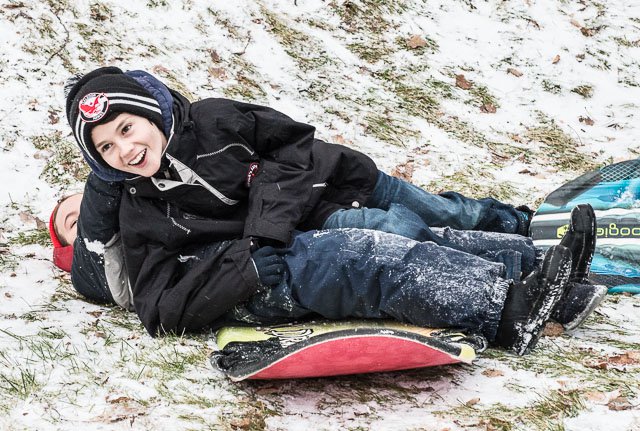 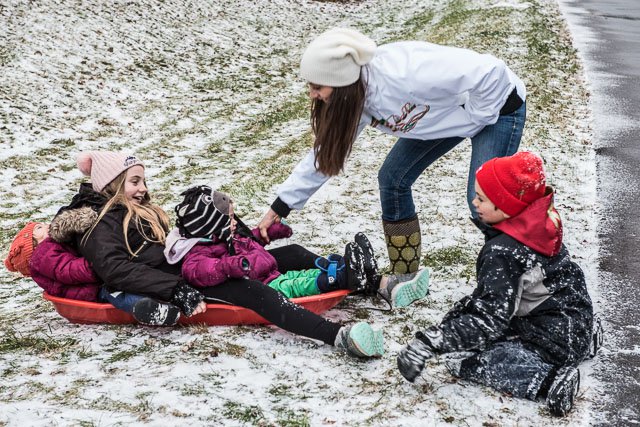