The Gift of Something Extra

Gail Cox didn’t need to be standing at the fence to know how the scenes would play out.

On a sunny, crisp autumn day at the picturesque farm, the treelined 100-acre home to over 50 retired thoroughbred horses, a group of visitors strolled about the property, carrots in hand, happily interacting with the horses.

“This guy, who we call Charlie, was a million-dollar earner on the racetrack,” heralded Vicki Pappas to those who had gathered. “He loves people and he loves attention.”

Pappas, a founding member and longtime chairperson of LongRun, one of the continent’s most respected horse retirement and adoption organizations, and the first industry-funded adoption program in Canada, appreciates the presence, personality and popularity of the horse known as Something Extra during his racing days.

“He is such a hambone and a wonderful ambassador when we have visitors to the farm… they all love to meet a millionaire,” said Pappas, who was inducted into the Canadian Horse Racing Hall of Fame this year in the Builder category. “You can tell how much ego he has, and that’s what made him such a good racehorse. When his paddock mates start running around, he likes to lag behind them, pretending he can’t keep up, and then just comes on and blows them away. But you can see that he loves the attention and adulation from anyone he meets.” 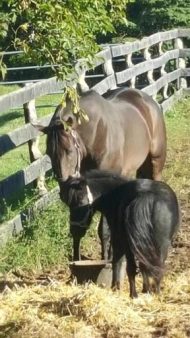 That was more than evident on this day as the 13-year-old gelding readily, although gently, accepted each carrot he was given, nudging his head forward to take as many pats as he was offered.

For Cox, the woman who trained and co-owns the dark bay son of Indian Charlie, those moments, something she’s heard of countless times, always elicit a wide smile.

“He’s a real people horse, he always has been,” noted the multiple graded stakes winning conditioner.

Bred in Kentucky by Gulf Coast Farms, Something Extra was originally purchased for $85,000 at the Keeneland September yearling sale by Cox for herself and co-owner John Menary.

Competing mainly at Woodbine, Something Extra recorded his first stakes win in the Grade 2 Connaught Cup in 2012 and repeated that feat one year later. In 2014, he won the Grade 2 Highlander Stakes, and in 2015 he took his show on the road to win Keeneland’s Grade 3 Shakertown. He contested two Breeders’ Cup Turf Sprints, in 2014 and 2015. After a handful of graded stakes efforts in 2016, he was retired with a career mark of 9-10-7 from 39 career starts, along with earnings of $1,015,394. 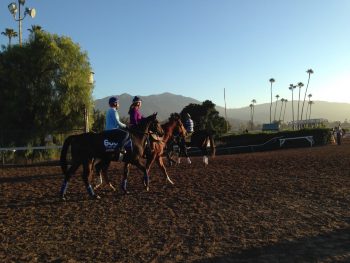 “He had this wonderful natural speed,” praised Cox. “He went fast very easily and carried that speed so well. Three-quarters was a great distance for him, but nothing ever shook him up. That win in the Shakertown was probably the one race that stands out for me. It’s not easy to win a stakes race at Keeneland, but he did, and he did it so impressively.”

When his racing days were through, Cox’s attempt to convert Something Extra into her track pony didn’t pan out – his competitive spirit couldn’t be satiated by walking babies to and from the track.

“That was my original idea, to make him my pony because I didn’t want to let him go,” recalled Cox. “The barn, everyone loved him. He had all of us trained. But he wanted no part of being a pony – too much racehorse. He had started the pony training in Ocala, and it was going fine. But he likes to be the boss around other horses, so when they would lay against him, he didn’t like that. So, that didn’t work out. Charlie would have none of it.”

She then thought of LongRun.

Cox warmed to the idea of seeing her beloved horse live a serene life in retirement, one where he could interact with other horses and the hundreds of visitors the property sees throughout the year.

“I’m so happy that LongRun exists,” said Cox. “He was a really special horse for us and he still is. He’s a horse that I will protect for the rest of his life. The first year at the farm, seeing him look different than he did on the track, it was very strange to see him like that. But he looks fantastic. They found the right horses for him to be turned out with… I’m so happy that he’s there.”

Cox, who along with Menary, fully sponsors Something Extra, visits the farm several times throughout the year.

“It’s obvious that she loves him to death, pays him lots of visits and tells us how great he looks,” said Pappas. “That means the world to all of us at LongRun, makes what we do worthwhile to know our efforts and those of this lovely horse are appreciated.” 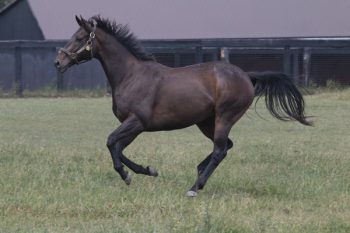 Scorching summer afternoons, bone-chilling winter mornings and everything else in between, Cox, always bearing some type of gift for Charlie, is never in a rush when she’s at LongRun’s facility, situated a little less than an hour’s drive north of Woodbine Racetrack.

“I see him before I go to Florida with my horses in the winter, as soon as I come back, and other times too.”

Those are, she said with a smile, times well spent.

“Whenever I see him, it brings back a lot of wonderful memories, those two Breeders’ Cups, winning that stake in Kentucky. Every time I pull into the property, so many things go through my mind. Just seeing him happy makes me happy. I always bring him carrots and mints.”

The latter is a must-have on Cox’s trips to LongRun.

“He’s a mint hound. He’ll do anything for those. They took him to a fair a couple of years ago, before COVID, and put him in a paddock where he could walk around. He’d follow everyone who had mints and when they’d stop, so would he. I love hearing those stories and I also just love having that one-on-one time with him.”

Those moments often stir recollections of the bond the two had forged years ago.

“I don’t know… it just kind of happened. That connection really progressed when he was three. I would get on him, back when I was galloping, and we really clicked. Then there was the traveling. Any racetrack he went to, I also went there in some capacity. I always wanted him to know I was there for him.”

As for those scenes, the playful interactions between Charlie and everyone he meets, they will always hold special meaning for Cox.

“I know how much he loves people and I hope people get that sense from him, that he gave them a special experience.”

Hopeful, that he was able to provide all with the same two words found on his halter.