TORONTO, August 13, 2020 – Woodbine Entertainment today announced the first edition of the 161st Queen’s Plate Power Rankings presented by the OLG Canadian Triple Crown, and it looks quite different than the list of top contenders from The Queen’s Plate Winterbook that was released in February.

Woodbine Entertainment also announced that this year’s Canadian Triple Crown of Thoroughbred Racing sees the Ontario Lottery and Gaming Corp. (OLG) return as an official partner and presenting sponsor, starting with The Queen’s Plate on Saturday, September 12 at Woodbine Racetrack.

The Power Rankings, to be updated three more times (August 20, September 3 and September 10) leading up to the $1 million Queen’s Plate, highlight some of the country’s most talented three-year-old Thoroughbreds seeking a spot in the starting gate for Canada’s most famous horse race. Votes are cast by expert horseplayers and racing personalities from Woodbine and Fort Erie: Jeff Bratt, Robert Geller, Ashley Mailloux, Doug McPherson, Jason Portuondo and Monique Vag. The rankings are based on votes following a points system (five points for a first-place vote, four points for second-place vote, etc.) for top five selections, and honourable mentions.

Trained by Steve Asmussen and owned by Winchell Thoroughbreds LLC and Willis Horton Racing LLC, the bay colt earned first-place recognition after an impressive effort in the Queenston Stakes on July 4 at Woodbine. Halo Again was listed as the fourth choice (8-1) in The Queen’s Plate Winterbook.

“After finishing fourth in the Jeff Ruby Steaks at Turfway Park, his connections sent him to Woodbine for the Queenston Stakes and he looked quite good,” said Mailloux, Fort Erie Race Track’s Handicapper and Paddock Analyst. “He was able to really gear down in the stretch, and edged clear in the end to win by over a length. I’m not sure we’ve seen his best yet.”

Woodbine Thoroughbred race caller Robert Geller included Olliemyboy (tabbed at 50-1 in the Queen’s Plate Winterbook) in his Top 5 after a sharp score on August 1 at Woodbine.

“Olliemyboy makes my Top 5 list after two impressive staying efforts, following up a late-closing second with a last-to-first victory at a mile and an eighth. He will like the distance (1-¼ miles) of The Queen’s Plate.”

Fans can track the Power Rankings on queensplate.com, the official website of the Queen’s Plate, and on Woodbine Entertainment’s social media platforms via @WoodbineTB.

The second jewel of the OLG Canadian Triple Crown is the 85th running of the $400,0000 Prince of Wales Stakes, set for September 29 at Fort Erie Race Track. The finest Canadian-bred three-year-old Thoroughbreds will face off in the final leg of the series in the 130th edition of the $400,000 Breeders’ Stakes on October 24 at Woodbine. 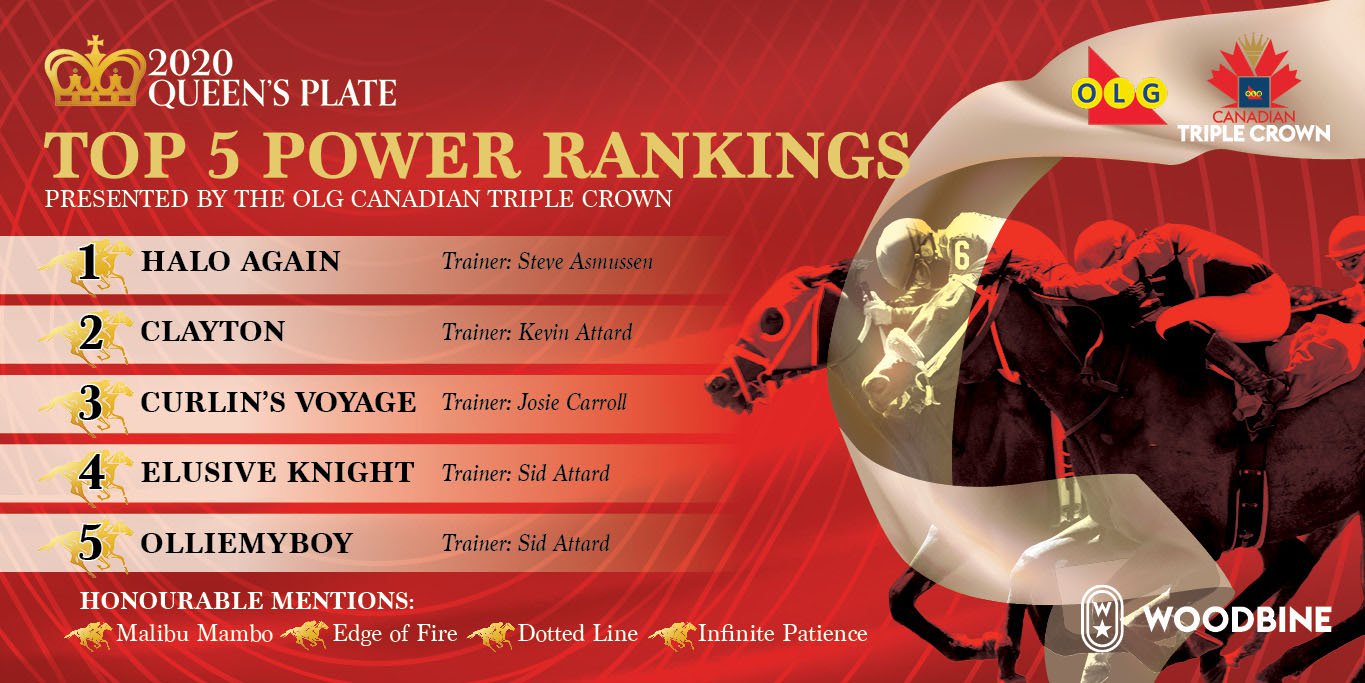